A slow-moving storm capable of producing flooding and severe weather will put millions at risk across the South Central and Southeast states early this week.

Over 61 million people in the central and southern United States will be at risk from a slow-moving storm capable of producing flooding and severe weather this week.

With days of rain expected and following a recent dry spell in the region, AccuWeather meteorologists warn that incidents of flooding could be widespread. Some locations from eastern Texas into Louisiana and farther east in southeastern Arkansas into Mississippi could receive rainfall amounts ranging from 4-8 inches over a three-day period. 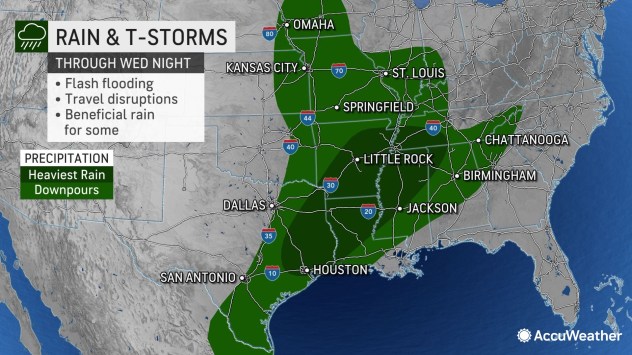 In spots with the heaviest rainfall, an AccuWeather Local StormMax™ of 12 inches is forecast. This includes cities such as Houston, Texas, and Little Rock, Arkansas, to Memphis, Tennessee.

A recent spell of heat and persistent dry weather across the south-central U.S. has worsened the drought in the area. Cities in Texas from Dallas to Houston and San Antonio have received less than 3 inches of rain this month through May 24, which is well below normal. The monthly average for Dallas is 4.78 inches, while it's 5.01 inches in Houston. In San Antonio, the monthly average is 4.40 inches. Through May 23, those three cities have received just 2.96 inches, 2.97 inches and 0.37 of an inch, respectively.

It's been even drier for cities such as Austin and Lubbock which prior to this week had less than half an inch of rain so far this month, bringing the drought to extreme and exceptional levels in those areas, according to the U.S. Drought Monitor.

The stormy weather pattern that is expected to persist across the region through Wednesday will bring much-needed rainfall to some areas but also the renewed threat of flooding.

Severe weather first targeted locations from eastern New Mexico, Oklahoma and western and central Texas to the Mexico border on Monday. Threats such as flooding downpours, hail and blowing dust were common in areas that received storms. A large tornado also touched down outside of Morton, Texas Monday evening, creating a harrowing scene on the ground. 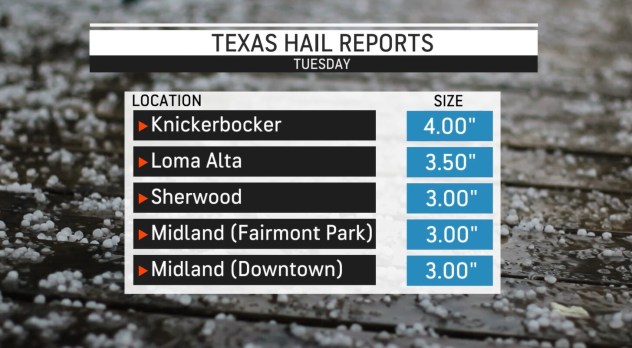 Top wind gusts reported Tuesday throughout Texas were in the cities of Sundown (78 mph), Midland (74 mph) and Brady (70 mph). 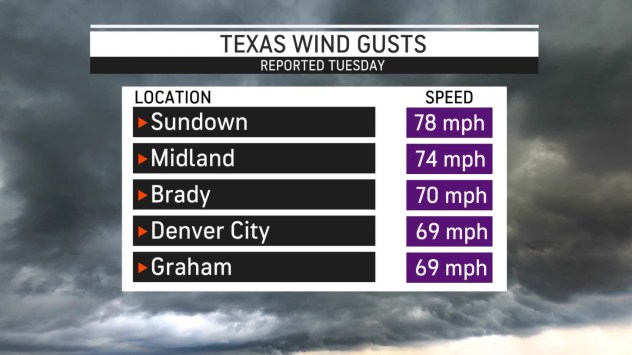 A tornado incident in Midland was intercepted by storm chasers on Tuesday evening, a frightening encounter with the northwestern Texas tornado:

We just had a close range intercept of the Midland tornado. Warning: language and also some dumb sounds by Lisa because wow, that was a whole experience. pic.twitter.com/rkdNkvsmUO

AccuWeather meteorologists will continue to track this same storm as it tracks farther east Wednesday into Wednesday night, but a secondary area of low pressure is expected to form and move northeast into the Great Lakes region. 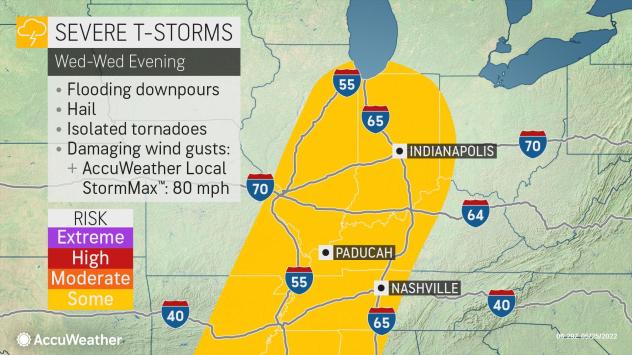 It is anticipated that the severe threat will shift into southeastern Texas and extend into the Ohio Valley as the two storms advance and bring the threat of widespread flooding downpours, hail, damaging wind gusts and isolated tornadoes.

Residents from Indianapolis to Nashville into Tupelo, Mississippi, and Houston should remain on alert for any severe weather updates Wednesday through Wednesday evening. 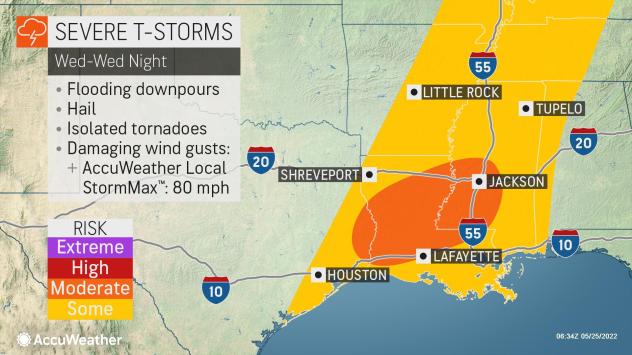 Motorists should also be vigilant as road conditions could change drastically during periods of heavy rain. Forecasters say downpours could reduce visibility and cause slowdowns on major interstates and state highways.

AccuWeather meteorologists say additional downpours and some severe thunderstorms could occur as the storm moves into the eastern U.S. late week.