A slow-moving storm capable of producing flooding and severe weather will put millions at risk across the South Central and Southeast states early this week.

Some turbulent weather during the hours before the kickoff of Memorial Day weekend is poised to create dangerous situations and disrupt travel across the mid-Atlantic as a tornado watch was issued for Washington, D.C., Baltimore and parts of four states early on Friday.

A massive and slow-moving storm system that brought flooding downpours and locally violent thunderstorms to the Ohio and Tennessee valleys, as well as the southern Appalachians, on Thursday will complete its journey to the East Coast on Friday, AccuWeather meteorologists warn.

The combination of surging humidity, jet stream energy and just enough warmth will be enough to trigger severe weather along a large portion of the Interstate-95 corridor as well as much of the I-81 corridor into Friday night. 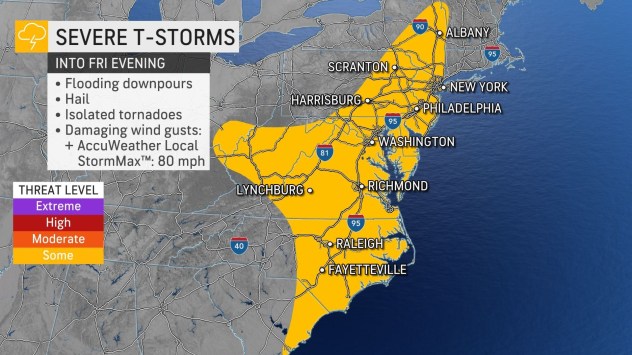 While all facets of severe weather are possible, torrential downpours will create low visibility and cause excess water on the roads, which could pose a significant hazard to the surge of motorists ahead of the holiday weekend. And strong wind gusts could knock trees down, creating sporadic power outages.

There is also the potential for a small number of the strongest storms to produce, brief spin-up tornadoes. It may be hard for motorists and people at home or work to see the tornadoes coming as they can be obscured in haze, low clouds and even drenching rain.

A line of strong storms, stretching from northern South Carolina to northern Virginia was spotted on radar moving northeastward Friday morning. These storms prompted a tornado watch and several tornado warnings for parts of central North Carolina, Virginia, Maryland, Washington D.C, and a small sliver of West Virginia Friday morning. A second tornado watch was issued for areas from eastern North Carolina to part of the Delmarva Peninsula and was in effect until Friday evening. 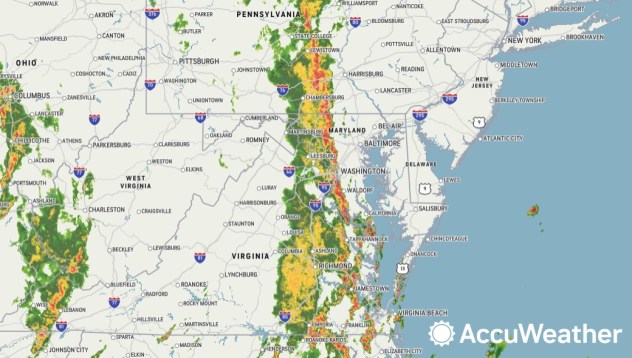 As a reminder, all thunderstorms have the potential to produce lightning strikes without notice. People should move indoors, away from windows at the first rumble of thunder. If camping, a hard-top motor vehicle is a safe place to lower the risk of injury during a thunderstorm.

Even though the storm system will bring a wet start and a small area of locally severe weather to the Northeast on Saturday, AccuWeather forecasters expect conditions will improve substantially by Sunday across much of the eastern United States. 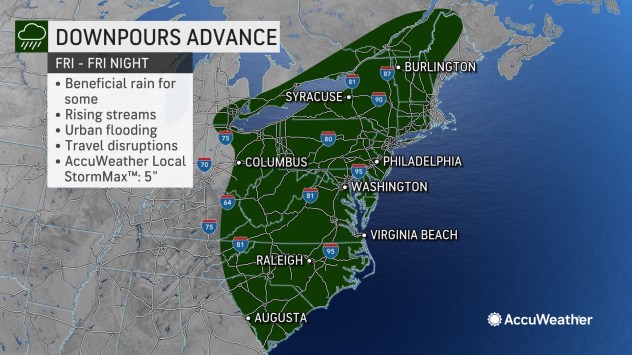 Earlier this week, a line of severe thunderstorms attributed to the large system produced dozens of incidents of severe weather ranging from tornadoes to high winds and large hail as it roared southeastward across Texas on Tuesday night, according to AccuWeather Senior On-Air Meteorologist Geoff Cornish.

"Hail up to the size of softballs fell on Knickerbocker, Texas," Cornish said. "Midland, Texas, was pummeled with hail the size of large apples and rocked with hurricane-force wind gusts to 74 mph. Wind gusts in Sundown, Texas, reached 78 mph." 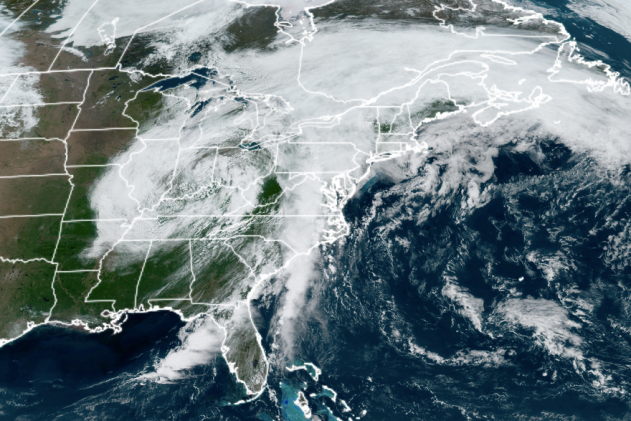 A massive amount of clouds associated with a large storm centered near Cincinnati on Friday, May 27, 2022, has a lot of ground to cover before departing the Atlantic coast by Sunday, but that is what AccuWeather meteorologists expect to happen and salvage the better half of the Memorial Day weekend. (GOES-East/NOAA)

The storm brought a general 3-6 inches of rain to the southern Plains with close to a foot falling on Cushing, Oklahoma, over a 36-hour period into Wednesday morning.

On Wednesday, there were at least 80 incidents of high wind gusts from the Gulf Coast to the Great Lakes region, including a tornado in northern Illinois.

A confirmed large and extremely dangerous tornado was reported east of Veedersburg, Indiana, on Thursday evening, according to the National Weather Service. Funnel clouds were also reported across North Carolina throughout the day on Thursday, with a potential tornado reported in Iredell County, according to the National Weather Service Storm Prediction Center.

Into Thursday night, the severe weather threat and torrential downpours shifted eastward and extended along much of the Interstate 65 corridor from the Gulf Coast to the Great Lakes and on to portions of the southern Appalachians.