A slow-moving storm will bring unsettled and stormy weather to the Northeast and mid-Atlantic states late this week and early this weekend.

An unsettled and at times stormy Memorial Day weekend is forecast for the Northeast, AccuWeather meteorologists say. However, unlike in 2021, when the unofficial start to the summer season was marred by cold weather and persistent rain, this holiday weekend will turn out warmer and may turn out to be dry by Memorial Day itself.

Disruptive weather during the first part of the weekend could throw a wrench into plans for many Americans looking to hightail it away from home after two years of coronavirus-related lockdowns and restrictions. Nationwide, more than 39 million Americans will travel more than 50 miles from home this holiday weekend, according to the auto club and insurance company AAA.

“Based on our projections, summer travel isn’t just heating up, it will be on fire," Paula Twidale, senior vice president of AAA Travel said. "People are overdue for a vacation, and they are looking to catch up on some much-needed R&R in the coming months.”

The weather forecast in the Northeast can take a dramatic turn during the holiday weekend, thanks to a slow-moving storm moving across the country. The same storm system and an associated wrinkle in the jet stream that were responsible for torrential downpours, severe thunderstorms and tornadoes over the south-central United States Monday and Tuesday will crawl northeastward later this week. 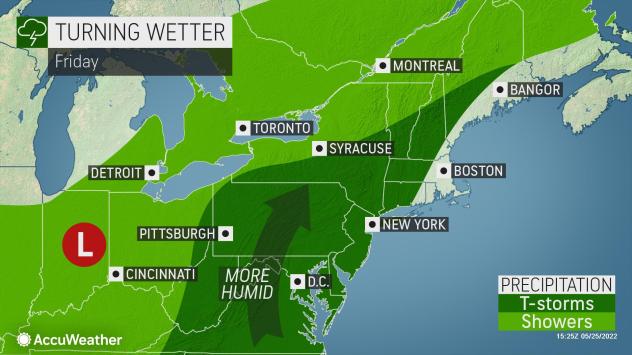 Showers and thunderstorms will begin to expand from west to east across the Northeast from Thursday to Friday and continue into at least the start of the weekend from the central Appalachians to the Atlantic coast, forecasters say.

Even though it is unlikely to rain the entire time anywhere in the region from Friday evening through Saturday, embedded within the showers will be localized torrential downpours and pockets of robust thunderstorms. A few areas could be saddled with brief flooding issues and/or damaging wind gusts and frequent lightning strikes.

A general 0.50 of an inch to 1.50 inches of rain is forecast to fall with locally higher amounts spread mainly over the first third of the three-day-long weekend.

After a rather wet and cloudy start to the holiday weekend, Sunday looks to be dry as the storm shifts offshore. Many parts of the Northeast will see clouds break for more sunshine. 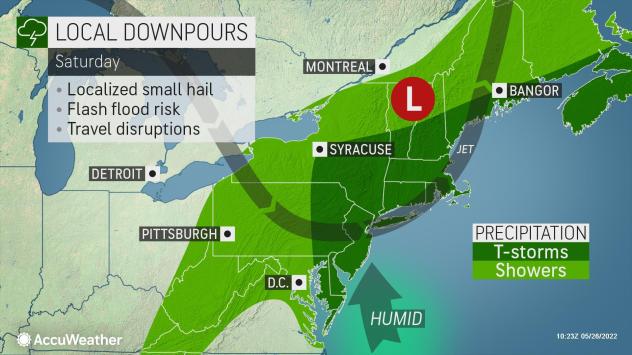 Memorial Day itself is also expected to be a nice day for most of the region.

AccuWeather Meteorologist Dean DeVore said that there is a better chance for drier weather as the holiday weekend progresses.

The weather around Washington, D.C., for Memorial Day services is looking dry at this point with sunshine and temperatures reaching the mid-80s.

There is a chance the weather may improve enough to view the sunset and the first round of Manhattanhenge in New York City Sunday and Monday evenings. Manhattanhenge occurs twice in May and twice again in July when the setting sun aligns with the eastward and westward roads of the borough’s grid. 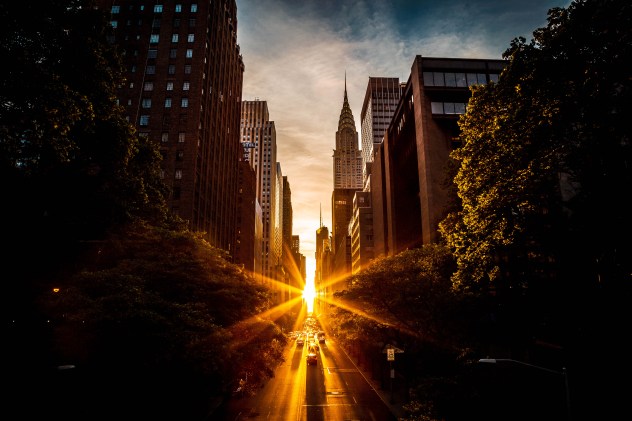 A view of the Manhattanhenge sunset from 42nd Street in New York City. (Photo/Josh Namdar/Getty Images)

Both Sunday and Monday should offer a good bet for New Yorkers to witness this phenomenon.

Despite the potentially disruptive and in some cases disappointing weather for the first part of this weekend, it will still be a far cry from the record cold and wet conditions that occurred on the holiday weekend in the region last year.

"Saturday and Sunday during the Memorial Day weekend from 2021 were flat out cold and rainy," AccuWeather Meteorologist Randy Adkins said. "Temperatures were no higher than the 40s over much of the central Appalachians while highs were mainly in the 50s F along the mid-Atlantic coast." 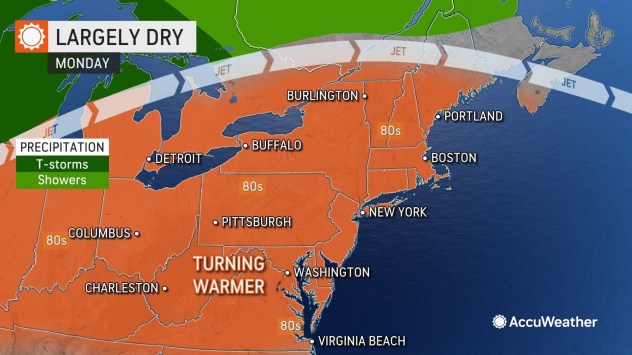 Memorial Day weekend 2021 kicked off with accumulating snow over the mountains of the northern tier with snowflakes reported in some higher elevations of New England. Record low daytime high temperatures dating as far back as the 1800s were set in dozens of locations.

Nearly 2 inches of rain poured down on Boston, 1.37 inches was measured in New York City and close to an inch soaked Philadelphia. Eventually, the sun emerged and temperatures climbed in much of the Northeast on Memorial Day itself, but temperatures still stopped short of average by 5-10 degrees.

Average highs during the last weekend in May range from the upper 60s in northern Maine to the lower 80s in southeastern Virginia.

High temperatures are forecast to range from the 60s to lower 70s over the mountains to the mid- to upper 70s along Interstate 95 Saturday. By Monday, with more sunshine in the forecast, highs are forecast to be mainly in the 80s.

An afternoon sea breeze may keep temperatures from getting no warmer than the 70s along the mid-Atlantic beaches on Monday despite the increase in sunshine.

Compared to the depths of the chill from last Memorial Day weekend, temperatures this weekend will be some 20-30 degrees higher.