A major storm will deliver life-threatening flooding, damaging winds and power outages to California and other parts of the West.

A major storm that has already rapidly intensified into a bomb cyclone off the coast of California will continue to pummel the Golden State, unleashing an increasing risk for life-threatening flooding, damaging winds and power outages through Thursday, AccuWeather meteorologists warn.

The storm will affect California just days after the deadly flooding and heavy snow that developed in the state over the holiday weekend, threatening travelers and causing hundreds of thousands of power outages.

Travel conditions deteriorated rapidly over much of California during Wednesday night and may be difficult and dangerous in many areas by Thursday morning for a variety of reasons. 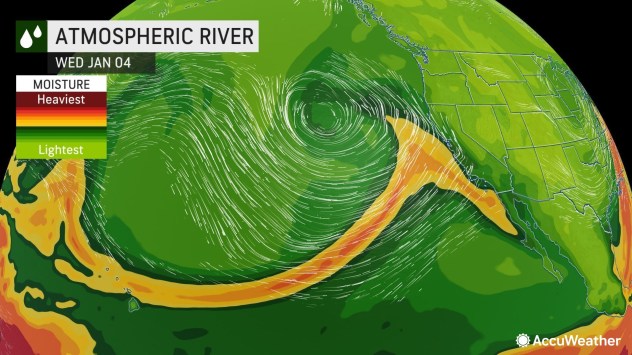 An atmospheric river, or massive plume of moisture that originated from the tropical Pacific Ocean some 2,500 miles away at midweek, will continue to fuel the heavy precipitation, even though the fire hose effect was beginning to weaken on Thursday. Such a weather setup can lead to excessive rainfall and flooding, as well as a thump of snow that can shut down travel where the atmosphere is cold enough. In this particular case, the event can be classified as a Pineapple Express, since the plume of moisture originated from near Hawaii.

"There is a significant risk for flash flooding, and people should watch for and avoid rapidly rising water which can quickly become life-threatening," AccuWeather Chief Meteorologist Jon Porter said, adding that flooding may result in street and highway closures. “This will be a dangerous and high-impact storm for California, capable of producing life-threatening conditions and significant disruption which may last several days.” 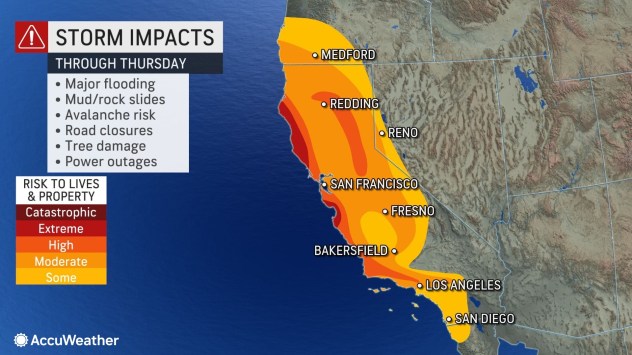 Mudslides are among the dangers that can persist for several days even after the rain ends, Porter explained.

“Not only will this storm be intense tapping into a substantial atmospheric river, but it is also arriving just days after the previous storm brought heavy rainfall and created significant flooding, increasing the impacts and risks that can occur,” he said.

The rapid intensification of the storm, in a process known as bombogenesis, will add to the dangers it poses, including strong winds on top of the extreme precipitation. When the barometric pressure falls at least 0.71 of an inch (24 millibars) in 24 hours, a storm has undergone bombogenesis, and meteorologists will often refer to this type of strengthening system as a bomb cyclone. From Tuesday morning to Wednesday morning, the central pressure in the storm plummeted 0.86 of an inch of mercury (29 millibars) and exceeded the official criteria for a bomb cyclone.

The Los Angeles and San Diego areas were bearing the brunt of the fire hose effect on Thursday morning.

"Rainfall rates may exceed 2 inches per hour in some areas, especially over higher terrain," Anderson warned. 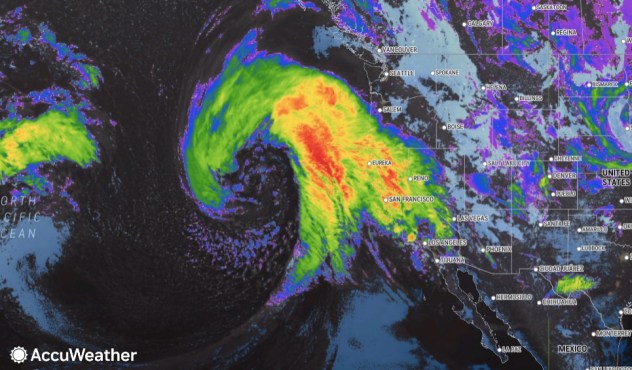 Multiple areas face excessive rainfall on the order of 4-8 inches of rain. Rainfall of this magnitude on top of the several inches of rain that fell on New Year's Eve could result in a dangerous flash flood and mudslide situation in a number of communities of the Golden State.

In advance of potential flooding across the state, the California Department of Water Resources stated Tuesday that the organization has prepositioned flood fight materials and equipment at 38 different locations, and have deployed levee inspectors before the rainfall.

Even though the atmospheric river portion of the storm had departed Northern and Central California as of Thursday morning, additional periods of rain will continue to pour down through Thursday afternoon.

Another pocket where 4 or more inches of rain is likely to pour down is the west-facing lower slopes of the Sierra Nevada just east of Sacramento to just east of Redding, California. 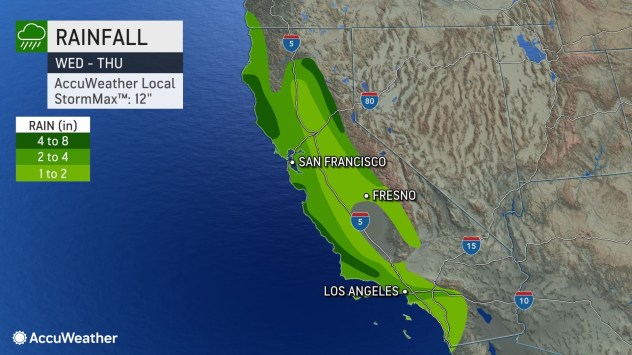 The cities of San Francisco, Sacramento and Los Angeles will still receive heavy enough rain from the storm to lead to flash flooding, forecasters say. San Francisco will likely pick up 2-4 inches of rain from the storm with 1.50 -3 inches on the way for Sacramento and Los Angeles. Much of that rain may fall within a 12-hour window or less with quick runoff collecting on area streets and highways.

"Motorists traveling through the region may encounter washed-out secondary roadways and may have to take detours," Anderson said.

Another significant problem from this storm will be caused by strong winds, which can approach hurricane force (74 mph or greater) in some locations. The high winds will be created as the barometric pressure plummets in the storm and causes air to rush in toward the system's center. 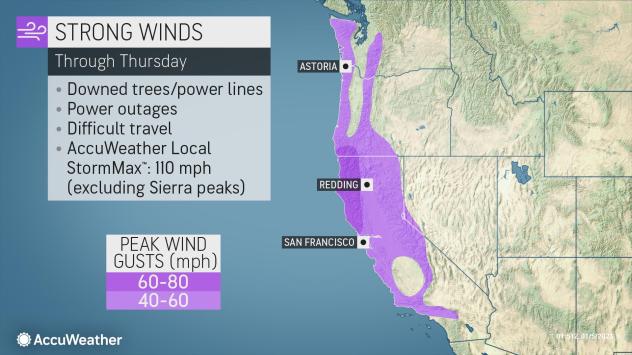 The force of the wind can cause poorly rooted trees in saturated soil to topple over. Where utility lines are in the way, power outages will result. Hundreds of thousands of utility customers could experience power outages from the storm.

"Residents should make preparations for this storm by filling up their cars with gas, having enough gas to power generators, and stocking up on non-perishable food items in case there is an extended loss of power," Anderson said.

As tree limbs break or trees come crashing down, people in stopped vehicles and pedestrians beneath can be seriously injured.

"Travel during the height of this storm is strongly discouraged," Anderson said. 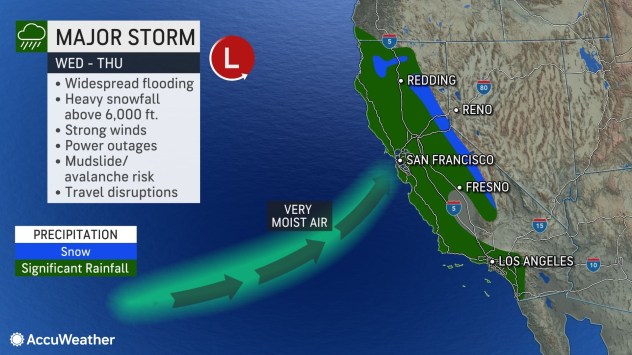 "Snow levels in the Sierra Nevada were mostly above pass level on Wednesday but then began to lower Wednesday night," Anderson said. "Several feet of snow, especially above 7,000 feet will fall from the storm into Thursday evening. Travel through the higher passes of the Sierra Nevada Wednesday may difficult due to periodic high snowfall rates, near-zero visibility and strong winds."

There is the potential for road closures along I-80 due to heavy snowfall. The highway in the Sierra Nevada was closed for many hours over the New Year's weekend as snow piled up fast and stalled vehicles.

Snow levels are likely to remain above Southern California passes, but heavy snow will fall for a time ove the higher elevations along I-5 in Northern California. 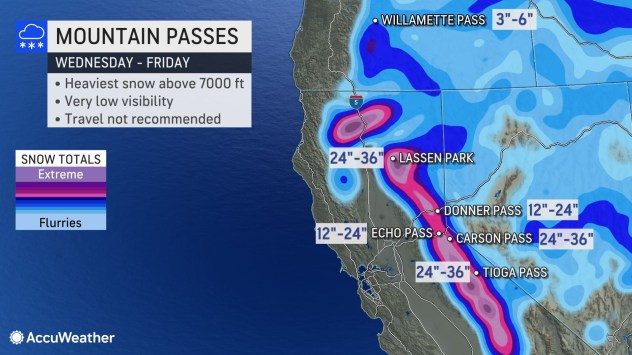 The same setup brought a staggering hourly snowfall rate of 7.5 inches per hour Saturday afternoon at the Central Sierra Snow Lab and deposited several feet of snow on the high country of the Sierra Nevada in 12-24 hours.

Without question, the barrage of storms will help tremendously with the long-term drought in California and many other parts of the West. Some reservoir levels may surge to full capacity before the storm train eases down later in the month. 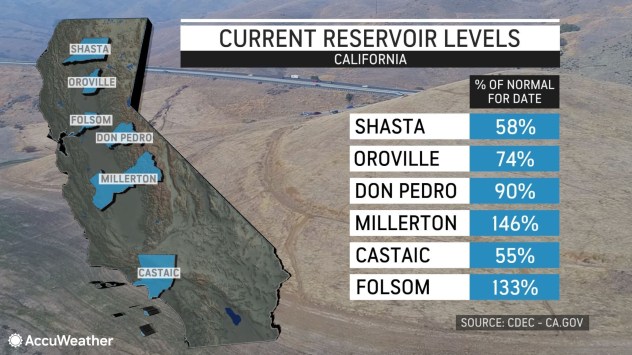 Many additional storms will roll ashore from the Pacific through the middle of January. The storms may be as little as 12 hours apart at times.

“Residents of the West Coast should continue to frequently check AccuWeather as additional storms are expected to parade into the West Coast through January bringing additional episodes of damaging winds, heavy rainfall and heavy snow in the mountains,” Porter said. 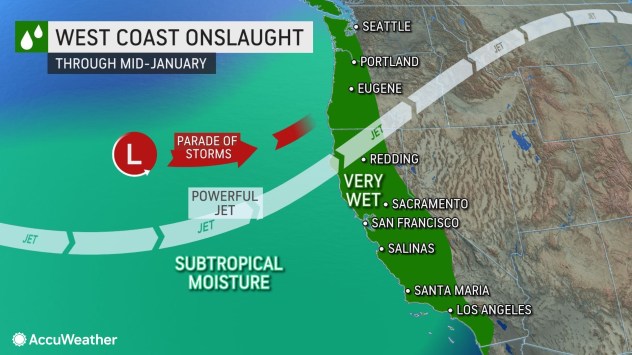 Each of these storms will have the potential to produce rounds of flooding rain at low elevations and heavy snow in the high country, AccuWeather meteorologists say. However, since the overall storm track is likely to shift farther to the north along the West Coast, many of the storms may avoid bringing much rain to Southern California. Storm-related problems are likely to increase in Oregon and Washington.

A skier died in an avalanche outside a Colorado resort

Renner thanks fans in 1st social media post after accident