A man has died after he was struck by lightning at a New Jersey country club, the National Weather Service (NWS) reported on Wednesday. This is the first recorded lightning fatality in the United States this year.

The NWS reported that an unidentified man was fatally injured at Burlington Country Club in Westampton Township, New Jersey, which sits roughly 30 minutes northeast of Philadelphia. Officials confirmed via Action News that it had happened around 3:45 p.m. EDT when the man was playing golf between the 6th and 7th hole during a thunderstorm.

“Thunderstorms were popping up across the mid-Atlantic all afternoon with frequent lightning," AccuWeather Meteorologist Brian Lada said. “Thunderstorms are typically considered severe when it is producing hail or wind gusts over 55 mph. The thunderstorm that tracked near Westampton, New Jersey, this afternoon did not meet the severe criteria but shows that any thunderstorm can be dangerous.” 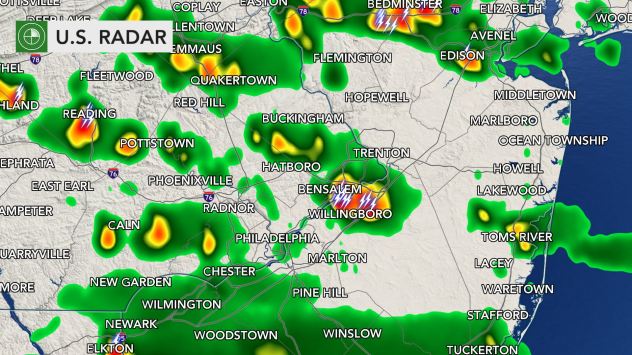 The weather radar on Wednesday, June 9, 2021 around the time that a lightning fatality was reported in Burlington County, New Jersey. The storm near Willingboro is believed to have caused the lightning bolt. (AccuWeather)

The NWS recorded 17 lightning fatalities during 2020. Lightning kills an average of 49 people each year in the U.S., and hundreds more are injured.

From 2006 through 2019, 418 people were struck and killed by lightning across the nation, according to a 2020 report by the National Lightning Safety Council. Sports-related fatalities, which includes golf, made up about 14% of these fatalities. Of all sports-related lightning fatalities, golf is the second-most dangerous activity after soccer, the National Lightning Safety Council said.

However, fishermen also accounted for four times as many fatalities as golfers, and beach activities and camping each accounted for twice as many deaths as golf, according to the analysis.

The summer months of June, July and August are also considered the peak months for lightning activity. Since 2006, July has had more lightning-related fatalities than any other month, followed by June, according to the council.

Woman, 23, tells her terrifying story of being struck by lightning inside her home
Texas governor vows to ‘weatherize’ after deadly winter crisis
Record-setting blob of ‘sea snot’ has environmentalists concerned