Dr. Joel Myers, founder and CEO of AccuWeather, reviews how the damage caused by Eta and then Iota left many parts of Central America in disrepair.

For the third time in as many weeks, Central America is in the path of a tropical disturbance that is set to unleash flooding downpours over the hurricane-battered region through the weekend.

The storm-weary region is still in the early stages of recovery following deadly and devastating back-to-back strikes from Eta and Iota, both of which made landfall in Nicaragua as powerful Category 4 hurricanes.

“We are monitoring an area of low pressure located in the southwestern Caribbean that will slowly drift west-southwest over the next few days,” AccuWeather Senior Meteorologist Danny Pydynowski said.

On Friday morning, the disturbance appeared very disorganized on satellite with a broad area of showers and thunderstorms just off the coast of Panama and Colombia.

Showers and thunderstorms associated with the tropical disturbance were visible on satellite Friday morning, Nov. 20, 2020, with some rain already falling over portions of Central America. NOAA/GOES-East)

Regardless of development, forecasters urge people across the region to closely monitor the disturbance over the weekend.

‘Everything’s been destroyed’: The islands Iota left in ruins before Nicaragua How you can help those providing aid in Central America following Iota and Eta Tropical cyclones hitting the US are staying stronger after making landfall, new research shows

“Although there is only a low chance that this will develop and organize further, it will bring locally heavy rainfall to parts of Colombia and Central America through the weekend,” Pydynowski said. 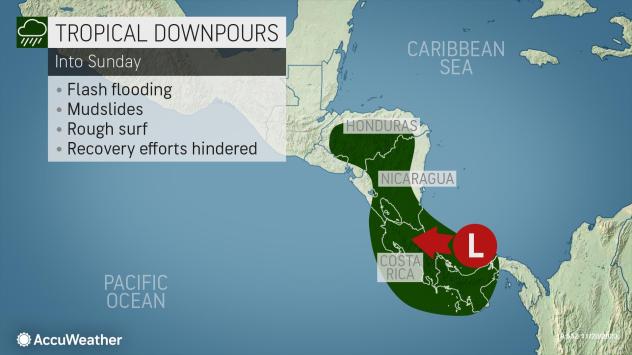 If it does manage to develop into an organized tropical system, it will likely become a tropical depression or tropical storm, rather than a potent Category 4 hurricane like the previous storms this month.

Nicaragua and Honduras were the hardest hit by the back-to-back hurricanes, but this new disturbance will be much different than Eta and Iota both in projected track and strength.

“While some downpours can spill over into southern Nicaragua, they are expected to remain south of areas the received devastating rainfall from Hurricane Iota,” AccuWeather Meteorologist Maura Kelly said. “The heaviest rainfall is expected to spread across Panama and Costa Rica Saturday and Sunday.”

The system's torrential rainfall could lead to flash flooding and rough surf along the coast and landslides in the mountainous areas of Coastal Rica, Panama and northern Colombia.

Even though the worst of the rain is expected to stay south of Nicaragua and Honduras, any rain could slow the rate at which floodwaters recede and cause disruptions to ongoing search and rescue efforts, especially in remote mountains where landslides have occurred.

AccuWeather meteorologists are also busy monitoring another disturbance in the Atlantic basin that also has the chance to develop into a tropical system before Thanksgiving. 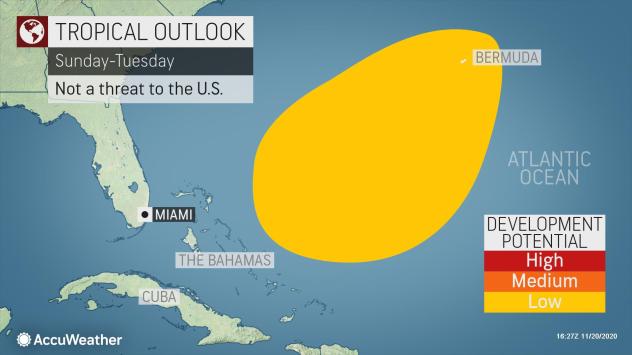 “We are showing a low chance of subtropical development early next week to the southwest of Bermuda as low pressure develops in this area and moves northeastward,” Pydynowski said. “Regardless of development, this low could bring some gusty winds and rain to Bermuda during the first half of next week.”

The next two named storms will take on the name Kappa and Lamda, the 10th and 11th letters in the Greek alphabet, respectively. The 2020 Atlantic hurricane season has already generated a record-setting 30 named tropical storms, 13 hurricanes -- six of which strengthened into major hurricanes. Three of these major hurricanes in particular underwent particularly notable explosive strengthening.

Delta, Eta and Iota intensified extremely rapidly with maximum sustained winds increasing by 100 mph within 36 hours, putting them in the ranks of only eight other hurricanes to undergo a similar strengthening over such a short time in 169 years of record-keeping, according to Meteorologist Sam Lillo. The latter two storms from this season are notable not only because they made landfall in Central America in quick succession, but because they rapidly intensified in November, a month when tropical waters typically begin to cool and tropical activity generally tapers off. 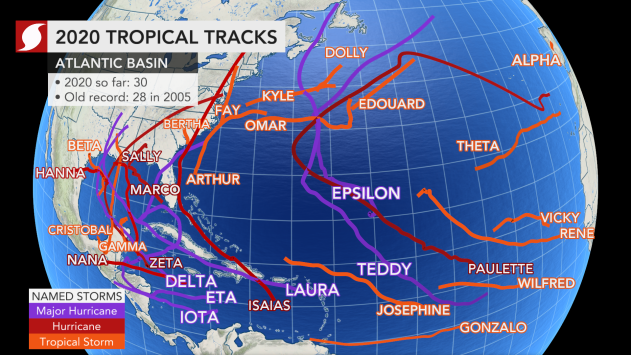 Another index that meteorologists use to better understand the intensity of tropical systems over their lifetime is the accumulated cyclone energy (ACE), and a total for the season can help to rank different seasons to gain a full picture of the strength and duration of tropical cyclones. The 2020 hurricane season had an ACE value of close to 180 as of Nov. 18, ranking it 13th overall in history. In comparison, the ACE value for hurricane season averages to 106. 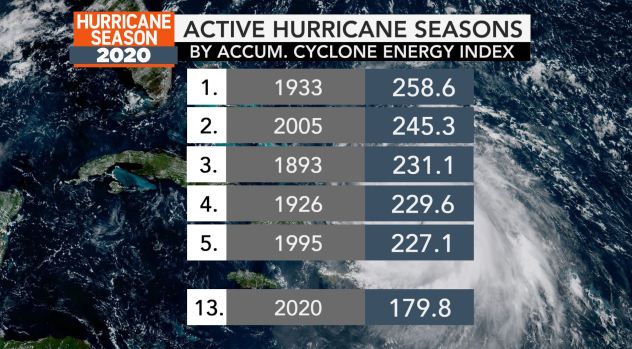 For all tropical information and news, visit the AccuWeather Hurricane Center. AccuWeather forecasters have been warning for months that tropical development could continue well past the official end of hurricane season, which occurs on Nov. 30.