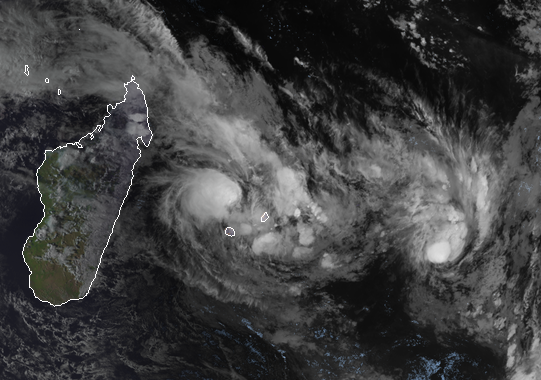 This satellite image from Friday night, local time, shows the tropical depression (left) that brought flooding rainfall to northern Madagascar on Thursday and Friday moving away from the island nation. Another tropical depression (right) also tracks east across the South Indian Ocean. (Photo/RAMMB)

A tropical disturbance tracked across northern portions of Madagascar late Thursday and into Friday brought another round of heavy rainfall to an area that has had almost daily downpours all week.

While heavy rain from these types of storms are not uncommon for the island located in the tropics, the extended period of downpours in the last week as well as for the month of January has exacerbated flood conditions.

Food insecurity may also be a concern for residents in the region as floods destroy rice plains and the lowlands used to grow crops.

This disturbance originated in the Mozambique Channel where it slowly developed through the middle of the week.

As this system tracked across the island nation, it brought widespread 24-hour rainfall totals up to 50 mm (2 inches) across the region, while Antsohihy reported 129 mm (5.08 inches) of rainfall.

The disturbance developed in a band of tropical moisture has been sitting over northern Madagascar and producing downpours over the past week.

Flooding across the region has killed at least 21 people, according to Defimedia, with 20 people still reported missing.

Areas of national roads 4 and 6, which connect northwestern Madagascar to the rest of the country, have been washed away in the flood waters.

Periods of rain are expected to continue across northern parts of the island through the weekend as rescue and recovery efforts continue. Any locally heavy downpour can add to the flooding across the region.

The disturbance that tracked across the country developed into a tropical depression over the South Indian Ocean. The storm strengthened into a moderate tropical storm on the Meteo France intensity scale and was given the name Diane as it passed just north of Maurice on Friday.

Another tropical depression that was located farther east and has since strengthened into Moderate Tropical Storm Esami and weakened.