This satellite loop shows clusters of showers and thunderstorms across the eastern Pacific Ocean on Monday afternoon. (CIRA/RAMMB)

After a record early start to the hurricane season in the eastern Pacific Ocean, all has been quiet for the past several weeks. However, that has changed with the formation of Tropical Depression Three-E.

The Three-E formed in the late morning, eastern time, on Wednesday, June 24 and was slowly moving westward at 7 mph (11 km/h).

Moving through relatively warm waters, Three-E may continue to strengthen in the coming days, and become a tropical storm with winds of 39 mph (62 km/h), giving it the name Boris.

This first depression may not be the only tropical system to develop in the East Pacific Ocean in the coming days. 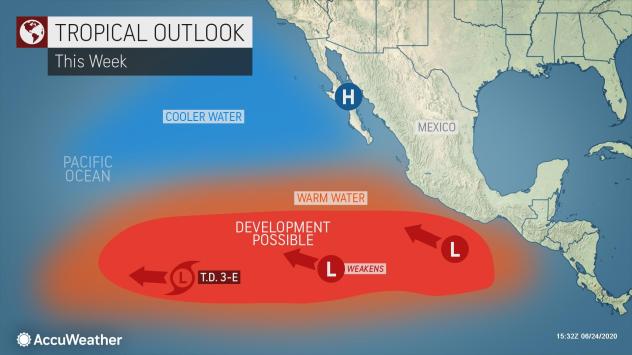 Following behind Tropical Depression Three-E, two other pockets of disturbed weather are currently sweeping generally from east to west across the region.

"A tropical low located about 1,000 miles to the southwest of the southern tip of Baja California, appears to be attempting to organize," according to AccuWeather Hurricane Expert Dan Kottlowski.

Currently, the low is moving through an area of higher wind shear. But, if wind shear currently impacting the feature decreases as expected, Kottlowski anticipates this system should continue to develop.

Wind shear is the change in direction and speed of winds at increasing heights in the atmosphere. Strong wind shear over the water can prevent clusters of showers and thunderstorms from ever consolidating into an organized area of low pressure.

Another factor that needs to be present for tropical development is warm water (around 80 F or higher), and the waters off the southwestern coast of Mexico currently meet this criteria.

AccuWeather meteorologists are also putting residents and visitors along the west coast of Mexico on alert for a potential third area of tropical development in the eastern Pacific Ocean this week.

"Development may take place perhaps by Friday off the southwestern coast of Mexico," according to Kottlowski.

How close this system takes shape to land will determine if gusty winds or heavy rain buffet the coast or remain offshore. Regardless, the system can stir up rough seas and hazards for swimmers and boaters as it organizes.

Meanwhile, surrounded by two more-organized systems, it is possible that the middle tropical low may dissipate.

"If any development were to take place, it would likely occur well offshore and remain that way," AccuWeather Meteorologist Derek Witt said.

Still, interests in the area, especially those related to shipping, should monitor the situation throughout the week.

The next names on the list for the 2020 East Pacific hurricane season are Boris and Cristina.

"Strong vertical wind shear and a large concentrated area of Saharan dust will continue to suppress tropical development across the rest of the Atlantic basin this week," Witt said. 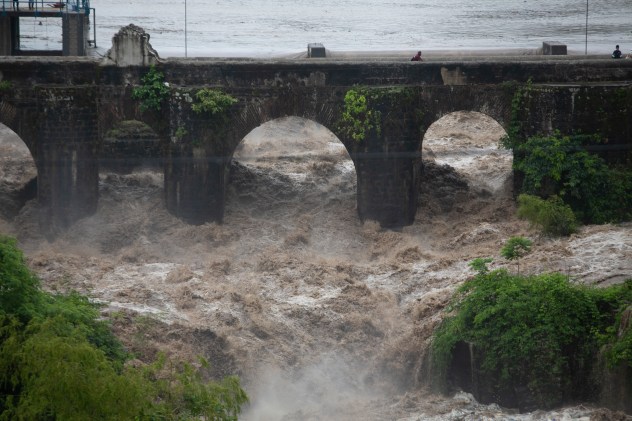 The formation of Tropical Depression One-E on Saturday, April 25, marked the first time in recorded history that a depression formed in April in the East Pacific basin.

The basin then remained dormant for over a month until Tropical Depression Two-E formed on May 30 and became the East Pacific's first named storm of the season, Tropical Storm Amanda, a day later. Amanda went on to make landfall in southeastern Guatemala and produced deadly flooding across Central America.