There are no active storms. Select Recent Storms to view storms that have recently passed.

The first day of December is upon us, and thus meteorological winter has officially begun, which also signals the official end of the 2021 Eastern Pacific basin hurricane season.

Barring an unlikely, but not impossible, out-of-season tropical development, this will be the last tropical Eastern Pacific update until the start of the 2022 Eastern Pacific basin hurricane season on May 15. 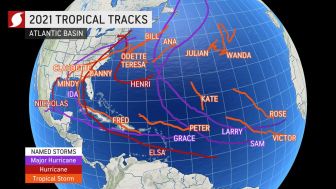