A cloud of Saharan dust will make it's way 5-thousand miles to Texas and the Gulf of Mexico. Experts say it will do little to suppress tropical developments.

An "abnormally large dust cloud" from the Sahara is making about a 5,000-mile trek across the Atlantic, suppressing tropical development in the Atlantic Basin. However, it may also pose a possible health hazard to those living along the Gulf coast.

Although it isn't uncommon for the Trade Winds to carry dust from the Sahara to the Gulf Coast, this plume has caught the attention of a few meteorologists.

"According to scientists that I have gotten some information from, they're saying this is an abnormally large dust cloud," AccuWeather Senior Meteorologist and lead hurricane expert Dan Kottlowski told AccuWeather's Jonathan Petramala. "One of the things I noticed from this is the dust started coming off the coast of Africa several days ago, in fact maybe over a week ago. And it's still coming. It's almost like a prolonged area of dust."

Some experts have nicknamed this the “Godzilla dust cloud” due to its unusually large size, The Associated Press said. 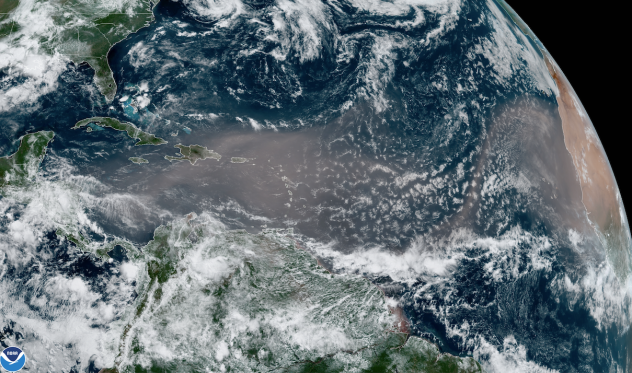 Satellite imagery of the dust plume from the Sahara trekking across the Atlantic toward the Americas on June 22, 2020. (NOAA/GOES16)

Dust making this journey from the Sahara to the Gulf Coast is common during June, July and sometimes into early August. Picked up by the Trade Winds and lofted higher up into the atmosphere, the dust gets trapped as the wind spirits it away across the Atlantic.

"This is the dusty time of the year," Kottlowski said. This year, he believes a stronger-than-normal, or at least a very active, African easterly jet might be at play in spurring the abnormal dust plume.

This dust event is particular is exceptionally large, one of the biggest in decades. “This is the most significant event in the past 50 years,” said Pablo Méndez Lázaro, an environmental health specialist with the University of Puerto Rico.

As the dust is carried across the Atlantic, it tends to suppress tropical development.

"It keeps a lid on the atmosphere and brings dry air into anything that may try to develop, which is very detrimental for tropical development which relies on warm, moist air," AccuWeather Senior Meteorologist Alan Reppert said. 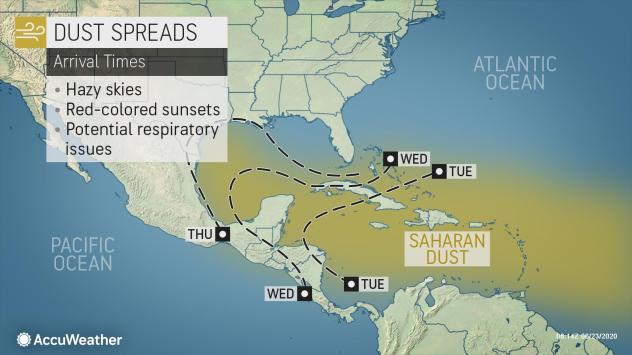 However, dust is rarely a factor during the later months of the Atlantic hurricane season -- August, September and October -- when storms become more active.

"Dust tends to be much less of a problem during the heart of the hurricane season," Kottlowski said.

However, while the dust can suppress development, it doesn't kill any development entirely, Kottlowski warned. It's still possible for a tropical wave to clear out a large area of the dust, allowing a second tropical wave following in its wake to take advantage of the break in the dust pattern.

There doesn't seem to be a break in this dust pattern just yet though.

A large plume of dust has moved off the west coast of Africa during the last few days. As this dry and dusty Saharan air layer moves across the tropical Atlantic toward the Caribbean it will help suppress the development of tropical systems. pic.twitter.com/fCoTw2xvl0

"I was amazed that the dust is still coming off the coast," Kottlowski said. "You don't see a break in it, so it's just a sort of long-lasting area of dust. We're going to see hazy skies across the Caribbean, probably into Florida into parts of the Gulf of Mexico area, probably for a week or two."

The dust is expected to reach the Texas coast on Thursday and curl around to encompass the entire Gulf Coast next weekend, Kottlowski estimated. 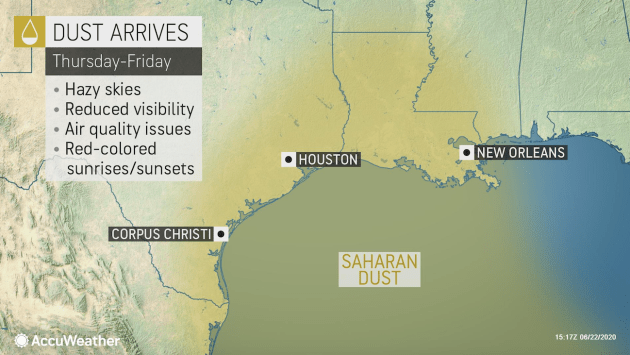 While the dust will hang higher in the air, it can still pose a health concern. Should any of the fine dust combine with other particles in the air such as ozone or other dust particles or smoke, it could impact people who are more prone to respiratory issues, Kottlowski said. He expects there will be a few poor air quality reports out of eastern Texas later this week.

The dust is also concerning for those battling COVID-19. A study released by the World Bank Group showed strong evidence that an increase in air pollution plays a role in COVID-19.

Why all sunsets are not created equal
AccuWeather increases number of hurricanes predicted for 'very active' 2020 Atlantic season
Will the East Pacific spring to life with one or more tropical systems this week?
Report a Typo
Comments that don't add to the conversation may be automatically or manually removed by Facebook or AccuWeather. Profanity, personal attacks, and spam will not be tolerated.
Comments
Hide Comments