Winds pick up as Sally pushes closer to Gulf Coast

Winds picked up in Pensacola Beach, Florida, on Sept. 15 as Hurricane Sally inched closer and closer to the Gulf Coast.

Noul made landfall as a tropical storm in central Vietnam on Friday leading to at least one death, as reported by the Bangkok Post.

VnExpress stated that Noul prompted the closure of several airports in central Vietnam on Friday, including Da Nang's airport, which led to several dozen cancellations and delays.

Noul produced 310 mm (12.20 inches) of rain in Da Nang from Thursday into Friday as the storm moved onshore.

⛈️Tropical storm #Noul has made landfall in #Vietnam with strong winds and torrential rain. It's tracking west across Vietnam, Laos & northern Thailand. pic.twitter.com/70Oi8yHwlC

Heavy rainfall and flash flooding from Noul moved across Indochina on Saturday. Portions of Thailand and Myanmar received a general 20-60 mm (0.75 to 2.50 inches) on Saturday alone.

As of Sunday afternoon, local time, Noul had lost significant wind intensity and could no longer hold onto its tropical storm status as it tracked into the northern Bay of Bengal.

Noul (known as Leon in the Philippines) first became a tropical storm on Tuesday night as a broad area of low pressure strengthened across the South China Sea after crossing the Philippines.

AccuWeather Meteorologist Tony Zartman explains, "Even though Noul has lost wind intensity and fallen below tropical storm status, it will still pose a significant flooding threat into Monday."

Widespread rainfall totals of 100-150 mm (4-6 inches) are expected from this storm with 200-250 mm (8-10 inches) of rain in the mountainous terrain across central Vietnam, Laos, Thailand and southern Myanmar. An AccuWeather Local StormMax™ of 400 mm (16 inches) will be possible in the hardest-hit areas.

What remains of Noul will continue its westward progression into early week. 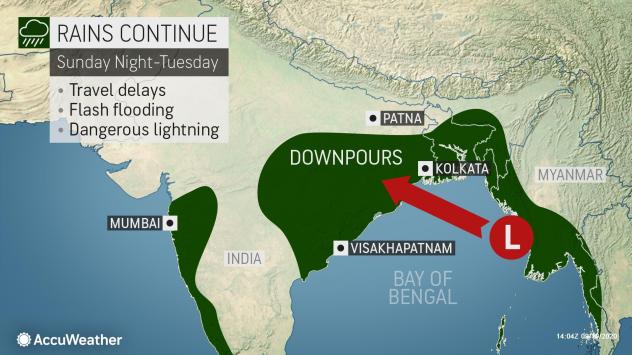 The heaviest rain from what remains of Noul is expected to shift from Thailand and southern Myanmar over the weekend into portions Bangladesh and India early this week.

This amount of rainfall as the storm tracks inland can lead to flooding and mudslides. Road closures are possible and some isolated communities could be inaccessible for several days.