AccuWeather forecasters warn there is a high chance for development of a tropical low pressure area across the Gulf of Mexico to the northwestern Caribbean late this week.

The Atlantic hurricane season’s first tropical depression, and potentially the first tropical storm, could form in a matter of days, AccuWeather meteorologists say. The budding storm is expected to slice across the Florida Peninsula with torrential rain and produce building seas and rough surf in the region.

Meteorologists say there is already some risk that the burgeoning tropical rainstorm, which would be named Alex once it hits the 39-mph maximum sustained winds threshold for a tropical storm, could cross Florida at the end of this week and then the northern Bahamas this weekend.

As Hurricane Agatha moved inland over Mexico and dissipated on Monday, two areas of circulation were left behind. Of the two circulations that emerged on either side of Mexico's Yucatan Peninsula on Tuesday, the disturbance over the northwestern Caribbean Sea has emerged as the more dominant one. 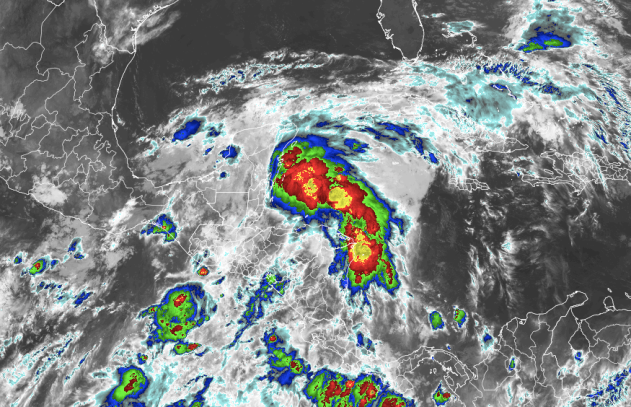 As of 2 a.m. EDT Thursday, the National Hurricane Center estimated an 80 percent chance that a tropical depression will form over the next 48 hours, with portions of western Cuba and southern Florida expected to be hit with heavy rainfall on Friday and into Saturday.

The rate at which the strengthening occurs is dependent on a number of factors with warm water and a decrease in strong wind shear both in the driver's seat. 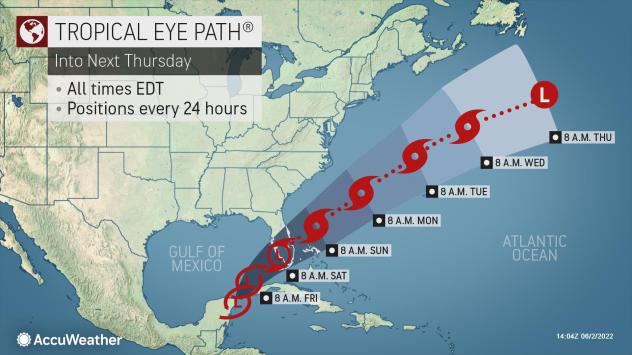 Water temperatures are a few degrees above average and generally in the 80s F in the path of the storm from the northwestern Caribbean to the southeastern Gulf of Mexico, the Florida Straits and waters just east of Florida. The critical temperature for tropical development is about 77 degrees.

Wind shear is expected to gradually decrease in the path of the storm. "That decrease in wind shear will be assisted by a zone of rising air that circulates around the globe over several weeks," AccuWeather Chief On-Air Meteorologist Bernie Rayno said. "This patch of rising air is known as the Madden-Julian Oscillation and will tend to cause wind shear to drop off around the northwestern Caribbean and the southeastern Gulf of Mexico over the next couple of days and that should allow the system to organize and gain strength." There is a chance that if wind shear drops off quickly, a faster ramp-up to a tropical storm can occur, perhaps before the system reaches Florida.

A small or medium amount of wind shear can actually assist in tropical development and strengthening of a tropical system in some cases. 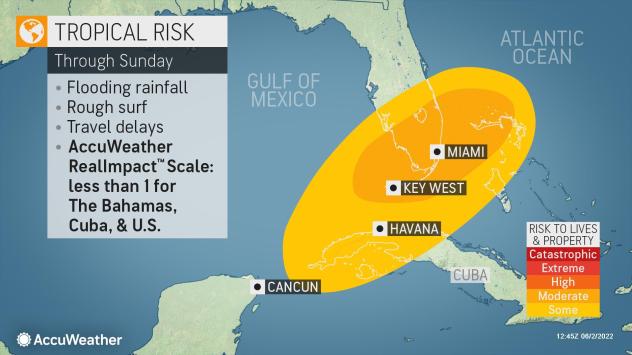 As the storm moves northeast, flooding rains will begin to impact western portions of Cuba as early as Thursday and South Florida as early as Friday.

AccuWeather meteorologists have preemptively given this storm a rating of less than 1 for Cuba and the U.S., according to the AccuWeather RealImpact™ Scale for hurricanes. The main threat to lives and property is likely to stem from heavy rainfall.

Rainfall amounts of 4-8 inches (100-200 mm) are anticipated across western Cuba, which can trigger flash flooding and mudslides.

As the storm moves into Florida, it will bring a large swath of torrential rains from the Keys to the southern and central parts of the Peninsula. The heaviest rain will likely occur in South Florida from Friday through Saturday night with an AccuWeather Local StormMax™ of 20 inches (500 mm). While the rain will help to alleviate ongoing drought, too much rain over a short period of time will lead to urban and low-lying area flooding.

Regardless of whether the system becomes a tropical depression or tropical storm, it will approach Florida with drenching downpours and gusty thunderstorms from Friday to Saturday and then impact the northern part of the Bahamas from Saturday to Saturday night.

In addition to torrential downpours and the likelihood of urban flooding, building seas and surf will occur around southern and central parts of the Florida Peninsula and the northern Bahamas. 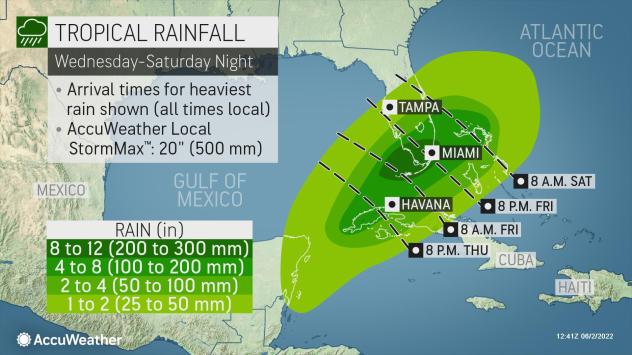 "There is also the potential for a few tornadoes and waterspouts as the system crosses the Florida Peninsula or passes just to the south of Florida," AccuWeather Senior Meteorologist Brett Anderson said.

Recreational boaters and workers in the offshore fishing and shipping industries from northern and western Cuba to Florida and the Bahamas should keep a close eye on the development and track of this tropical system into this weekend, AccuWeather forecasters advised.

After the system passes Florida and the Bahamas, it is likely to spin northeastward along the southern Atlantic coast of the United States for a time next week with the intensity of a strong tropical storm.

The storm system's proximity to the coast and strength once on the Atlantic side of the southeastern U.S. will be key in determining the level of impacts experienced from Georgia to the Carolinas and southeastern Virginia. Forecasters say potential impacts include building seas and rough surf, beach erosion, coastal flooding, and even gusty winds and rain. 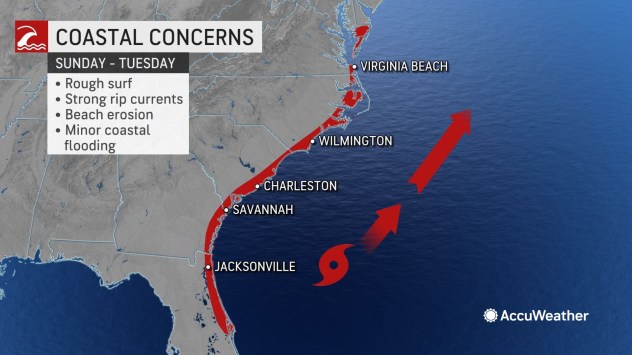 "There is a chance the storm could be drawn farther to the northwest by the approach of a dip in the jet stream over the Midwest later next week," AccuWeather Lead Long-Range Meteorologist Paul Pastelok said. "This action, short of a second landfall in the U.S., could spread rough surf and beach erosion farther to the north in the mid-Atlantic and southern New England regions."

Many beaches along the U.S. East Coast were hit hard by a long-duration, non-tropical storm earlier this spring. There was extensive damage to some beaches from the Carolinas to New Jersey. Many of the beaches have since been repaired, while a few are still in recovery mode.

Once the storm forms and begins its journey, AccuWeather forecasters will have more information on the severity of impacts moving forward.

Crossover tropical systems, such as the potential with Agatha, are rare. However, there is a fairly recent example of a former tropical system from the eastern Pacific that helped give birth to a new storm on the Atlantic side of Central America.

This satellite loop from June 2020 shows the evolution of the Gulf of Mexico's Tropical Storm Cristobal from the former Tropical Storm Amanda in the East Pacific. (AccuWeather)

During the historic 2020 Atlantic hurricane season, Tropical Storm Amanda moved inland from the eastern Pacific over Mexico and began to unravel. But Amanda's leftover energy, moisture and old circulation helped to give birth to Tropical Storm Cristobal in early June over the Gulf of Mexico, which went on to make landfall along the central Gulf Coast of the U.S.

There is another area of the Atlantic basin where a potential tropical system could take shape. 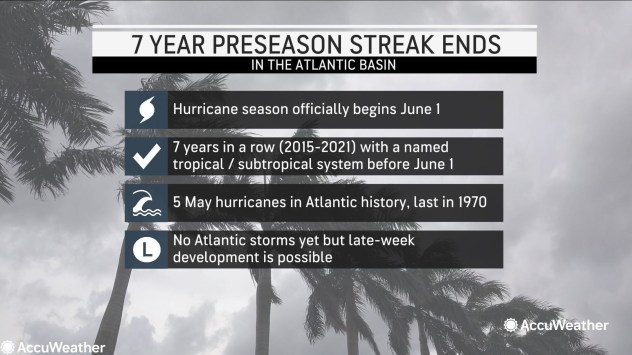 AccuWeather meteorologists were monitoring a general zone of showers and thunderstorms associated with weak low pressure currently northeast of the Bahamas Wednesday. There is a remote chance this area of disturbed weather could slowly organize as it drifts northeastward and out into the central Atlantic during the balance of this week. In Palm Harbor, Florida, a tornado was confirmed to touch down in the area Tuesday, with no significant damage reported as of Tuesday evening.

Even though tropical development in the Atlantic did not occur prior to the official start of hurricane season this year for the first time since 2014, an above-average number of named systems and hurricanes is forecast by AccuWeather for the 2022 season.

Waters near the Atlantic and Gulf coasts of the U.S., as well as the islands of the western Caribbean and Central America, are perennial hot spots for tropical development in June.