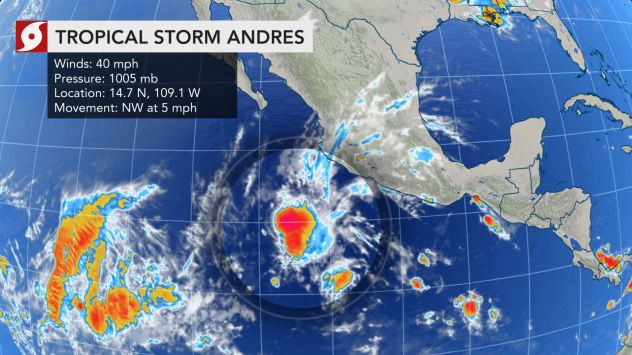 This satellite image shows Andres at it's peak intensity as a tropical storm on Monday morning, May 10, 2021. Andres lost wind intensity and became a depression late Monday. (CIRA/RAMMB)

Andres became the first named tropical system of 2021 in the Western Hemisphere on Sunday when it became a tropical storm, setting a new record for earliest formation in the East Pacific and arriving days before the official start of hurricane season.

AccuWeather meteorologists were monitoring a disorganized area of low pressure a few hundred miles south of the Gulf of Tehuantepec much of last week over the anomalously warm water for this time of year. This low pressure then developed into a tropical depression on the morning of Sunday, May 9.

Additionally, when Andres formed on Sunday morning, local time, it became the earliest tropical storm on record to be named in the East Pacific Basin. Previously, the record was held by Tropical Storm Adrien, which was named in the afternoon of May 9 of 2017, according to the National Hurricane Center.

Since then, Andres lost enough wind strength to be downgraded to a tropical depression later in the day on Monday, before dissipating Tuesday morning. 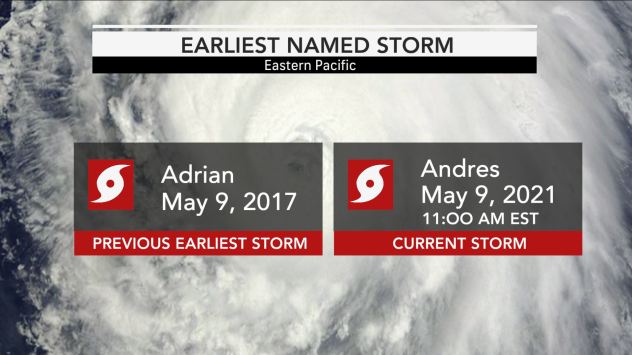 "Andres was located about 650 miles south-southeast of the southern tip of Baja California when it was named," said AccuWeather Meteorologist Alex DaSilva.

Two of the main environmental ingredients necessary for a tropical system to form are warm water and the absence of wind shear, or disruptive winds in the atmosphere. Typically, meteorologists consider 80 degrees Fahrenheit a critical temperature threshold for tropical development, or the level needed to sustain a tropical storm.

AccuWeather Senior Meteorologist Dave Houk explained last week that both of these factors will be present over the region through Monday.

The winds high up in the atmosphere are forecast to steer any cyclone that may develop to the west, which would direct the system away from Central America and Mexico. This wind pulled Andres into cooler waters, allowing it lose wind intensity late on Monday.

The convention of naming tropical storms dates back to 1979, but now the process consists of six lists of names, which are rotated through each calendar year. For the East Pacific lists, a name beginning with each letter of the alphabet except for Q is utilized. 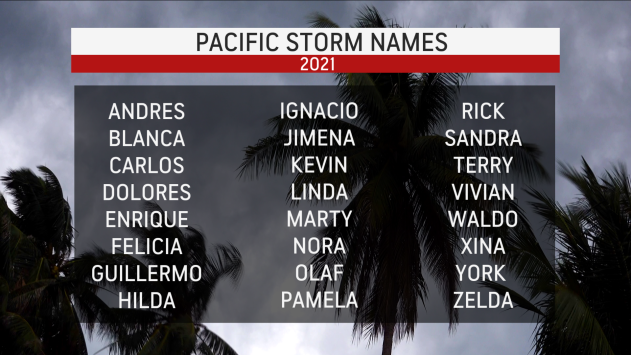 The list being used for the 2021 East Pacific season was last used in 2015. The 2015 East Pacific tropical season was particularly active, consisting of a record-high 31 depressions, as well as 26 named tropical storms and a record-tying 16 hurricanes. The season also produced a record of 11 major hurricanes, which still stands as the most one season has generated to this day.

The 2015 season's most intense storm was Hurricane Patricia which, at its peak, reached Category 5 strength with winds of 215 mph (345 km/h) and a central pressure of 25.75 inches mercury (872 millibars), becoming the strongest storm ever in the Western Hemisphere. The name was officially retired by the World Meteorological Organization at the end of the season.

The 'average' hurricane season has a new normal
Greek alphabet will no longer be used to name hurricanes
NHC probing whether to change start date of Atlantic hurricane season
‘Monster’ hurricanes keep getting even stronger, analysis shows

Conversely, last season, it took until the end of May for the first named storm to develop in the East Pacific Ocean Basin.

Amanda became the first tropical storm of the season on May 31, drifting northward while bringing heavy tropical downpours to parts of central America and southern Mexico. 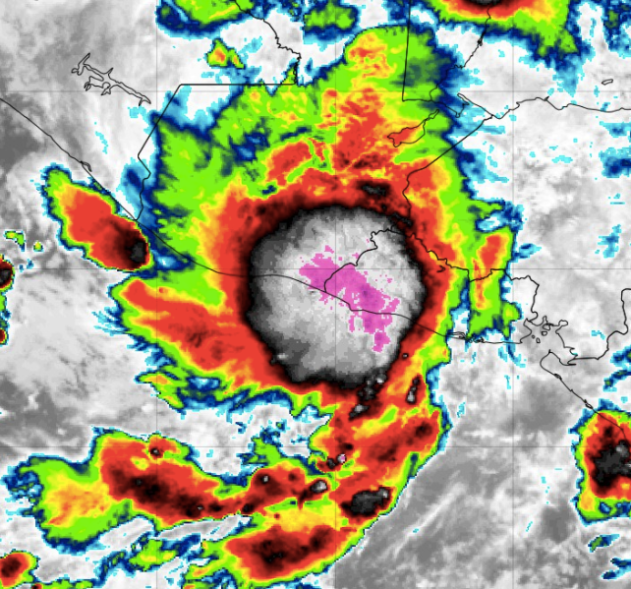 The above satellite image shows Tropical Storm Amanda at peak strength while it made landfall on May 31, 2020 in Guatemala. (CIRA/RAMMB)

While Amanda dissipated quite quickly over the mountainous terrain of the region, the lingering circulation from the storm formed Tropical Storm Cristobal in the Bay of Campeche just two days later on June 2. Cristobal went on to travel north through the Gulf of Mexico and made landfall in southeastern Louisiana on June 7.

Cristobal was the earliest third-named tropical storm to ever form in the Atlantic Ocean, setting one of many records from the historic 2020 hurricane season in the basin.