Marine conservationists embarked on a rescue mission as they investigated how the mammals may have ended up on shore.

Half of the pod, thought to be pilot whales, are believed to still be alive. The whales are stranded near Macquarie Harbor, according to the Sydney Morning Herald.

The Department of Natural Resources and Environment Tasmania said that the rescuers were headed to the coast with whale rescue gear and would work with the police and the Tasmania Parks and Wildlife Service Staff. 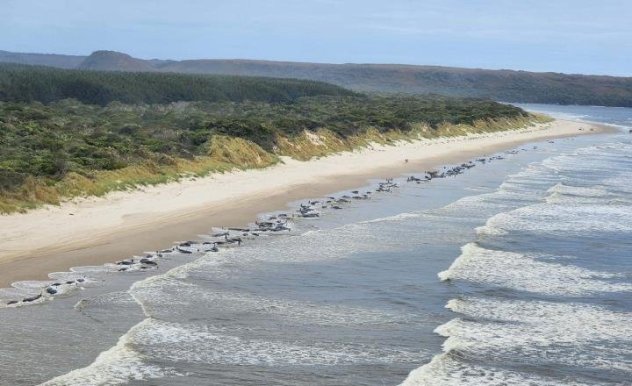 Nearly 230 whales were found stranded on the west coast of Tasmania on Wednesday. (Photo courtesy Department of Natural Resources and Environment Tasmania)

Wednesday's incident comes after a separate mass stranding in Northern Tasmania on Monday, where 14 young sperm whales were found dead on King Island.

Macquarie Harbor has experienced this before. In September 2020, nearly 500 pilot whales became stranded in the harbor. More than 380 of the whales ended up dying.

Wildlife scientist Vanessa Pirotta told the BBC the similarities between the stranding and the last one - same species, same location, same time of year -- are "unusual" and concerning.

The whales may have "misnavigated", followed a sick or disoriented leader, or been startled into shallower waters, she said.

Pirotta also suggested that climate change could have an impact as well, although the main reasons behind the strandings are still a mystery.