Following a round of mild weather, eastern regions will see a drop in temperatures early in the week

A taste of winter is expected in the Northeast as temperatures plummet and some areas receive their first snowflakes of the season.

After a stretch of generally mild weather last week, residents across the East may be wondering if December has come early as a blast of Arctic air infiltrates the region. A southward dip in the jet stream is ushering in chilly conditions to the Eastern states, accompanied by periods of wintry weather across the Great Lakes and Northeast.

Forecasters say that temperatures can drop 10-15 degrees Fahrenheit below normal through Tuesday across the Great Lakes and Ohio Valley, which will be a noticeable change from the above-average temperatures observed last week. 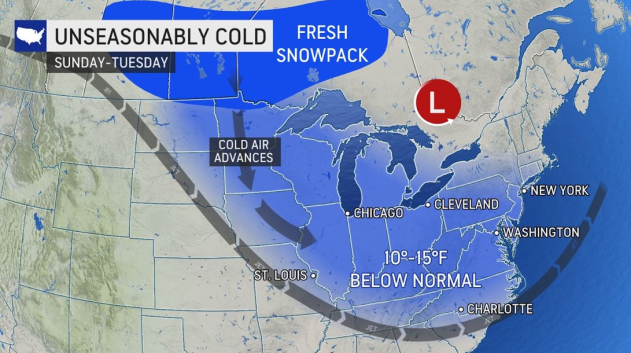 Last week, Cleveland recorded daily high temperatures in the mid-60s. Chicago even reached into the 70s on a few occasions.

Northern regions will not be the only ones experiencing this upcoming chill.

The cooler air will persist on Monday, as some locations across Tennessee, Alabama, Georgia, and the Carolinas will record high temperatures ranging in the 50s, falling between 5-10 degrees below normal.

In addition to this spell of lower temperatures, the Northeast is expected to receive a few bursts of wintry precipitation through Monday.

On Saturday night, snow showers lingered over portions of the Catskills and the Allegheny Mountains along with some lake-effect snow showers east of Lake Ontario, Lake Erie, and Lake Huron. Motorists were cautioned to stay weather aware and monitor any changing road conditions.

In addition, a few gusty thunderstorms rumbled through much of southeastern New England and New York City during the evening hours of Saturday, when lightning struck the One World Trade Center building at least three times. These storms also caused intense flooding in parts of Massachusetts. They then pushed offshore by late evening. 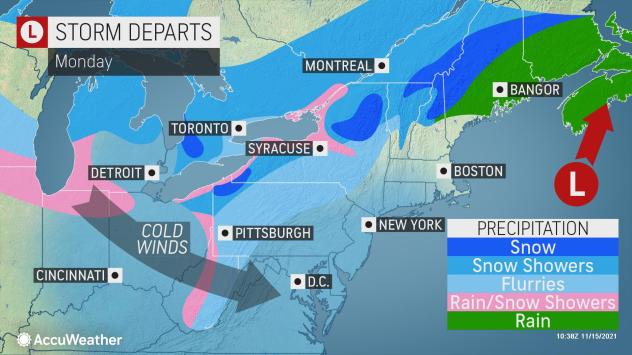 From Sunday to Sunday night, a separate shot of cold air that was being referred to as an Alberta clipper shifted southeastward from the Midwest and Great Lakes into the Ohio Valley and interior Northeast, bringing snow showers and a wintry mixture to the area once again.

New analysis shows the rainiest days are often getting rainier

Looking back at last November, a similar cold spell brought flurries and snow showers from the Midwest to the Northeast from the 16-18th. Cities such as Detroit and Cleveland recorded daily high temperatures in the upper 30s and lower 40s and captured just a trace of snowfall. State College, Pennsylvania, reported a high temperature of just 34 degrees in mid-November of last year.

AccuWeather Senior Meteorologist Dan Pydynowski stated, "It's not uncommon for cold shots of air to shift across the Great Lakes and interior Northeast around mid-November." 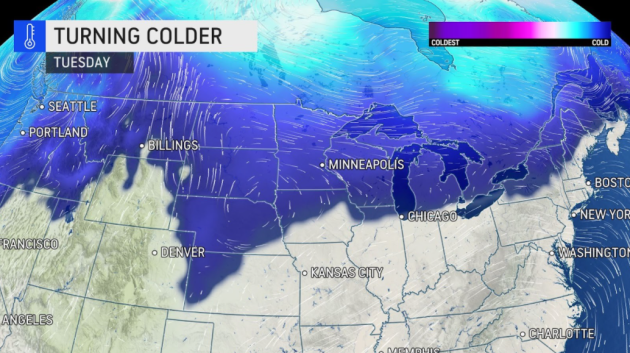 Heading into Tuesday, temperatures across the Southeast will begin to rebound, while regions farther north into Canada will still have temperatures on the low side. By Wednesday, most residents across the Northeast can anticipate a hint of warmth to return as daily high temperatures rise to a few degrees above normal. Some may note a temperature difference from midday Tuesday to midday Wednesday of roughly 10-15 degrees.

Cities such as Washington, D.C., Pittsburgh and Cleveland can expect high temperatures to reach into the 60s by Wednesday.