Over a foot of snow fell in the Ozark Mountain region, with accumulation also taking place in the Northeast. However, the Northeast's largest hub, New York City, avoided measurable snowfall yet again.

It’s been a mild winter so far in the Windy City, but snow returned in full force on Jan. 25.

Less than a week after a deadly winter storm brought heavy snowfall to the interior Northeast, the region was once again blanketed in precipitation, along with over a foot of snow in the Ozark Mountains and more snow across the Midwest.

The snowfall created many travel troubles for vehicles and airplanes alike, as well as massive power outages for several states. In the Midwest, multiple accidents shut down traffic Wednesday, including one accident on Interstate 475 west of Toledo, Ohio. At least one semi-trailer truck was seen off the road via a traffic camera, but it is unclear if there were any injuries.

At the Ohio-Michigan state line, southbound I-75 was mostly blocked in Lucas County, Ohio, after a semi jackknifed. More than 1,000 crews were on duty Wednesday to clear roads as snow moved through the northern portion of the state, according to the Ohio Department of Transportation.

Winter storm system moves across US

The rampant severe weather led to numerous flight delays and cancellations at major airports. At LaGuardia Airport in New York City, inclement weather caused some arriving flight delays during the afternoon hours, averaging 42 minutes. At Detroit Metropolitan Wayne County Airport, a ground stop was put into effect in the early afternoon due to snow on the runways.

According to FlightAware, there were 3,641 flight delays within, into or out of the United States as of Wednesday afternoon, including 648 at Chicago O’Hare International and 290 at the Detroit airport. Chicago Midway International Airport led the way in cancellations, with a total of 136 through the afternoon hours.

Farther south, snow was heavy in parts of northern Arkansas and southern Missouri, where the Ozark Mountains aided in enhancing snowfall totals. According to PowerOutage.us, more than 150,000 electric customers were without power in the two states Wednesday morning, including over 97% of all customers out in Missouri's Oregon and Howell counties.

The highest reported snowfall total between Tuesday and Wednesday afternoons in the Ozark region was in Logan, Arkansas, in Benton County, the home of retailer Walmart. Logan took in 16 inches of snow over the 24-hour period, with the second-highest total being 14.5 inches reported in Searcy, Arkansas. 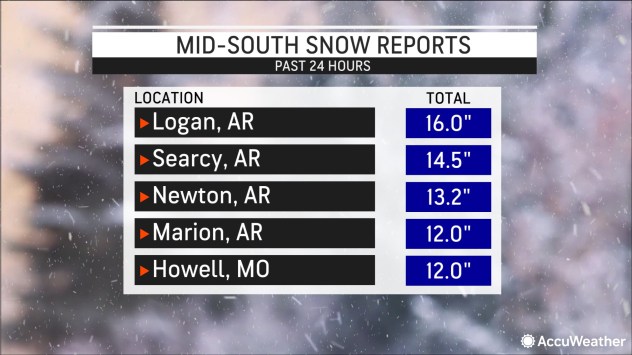 Snowfall totals in the south-central region as of late Wednesday night.

In the Northeast Wednesday, top snowfall totals were reported in West Virginia in the cities of Keyser (6.5 inches) and Hartmansville (6.3 inches). Other states that received snow included Maryland, with 5.8 inches accumulated in La Vale, and Pennsylvania, with 4.8 inches received in Hollidaysburg. 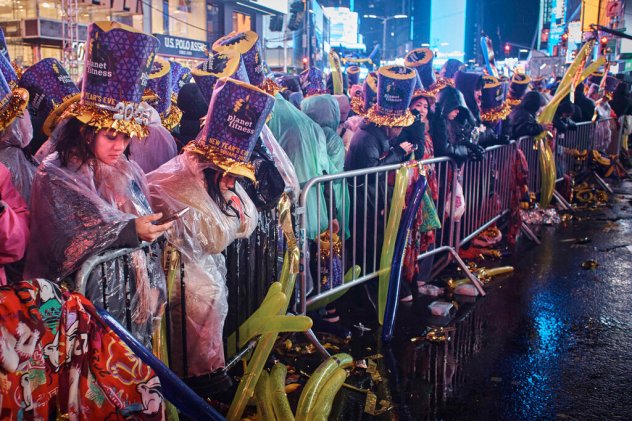 Revelers gather under the rain as they wait for the countdown during the New Year's Eve celebrations in Times Square, late Saturday, Dec. 31, 2022, in New York. The city avoided measurable snowfall once again on Wednesday, putting all-time snowless records in jeopardy. (AP Photo/Andres Kudacki)

The streak of consecutive days without measurable snow in New York City is now at 323 days, the second-longest streak on record behind a 332-day streak that ended on Dec. 15, 2020. Farther west in New York, thundersnow was observed near Tonawanda, New York, located about 10 miles north-northwest of Buffalo around 2:20 p.m. EST Wednesday. Thundersnow was also reported in southern Ontario, about 30 miles east of Detroit.