What does it mean when a Kona low is over Hawaii?

Residents and visitors to Hawaii may have heard the term Kona low or Kona storm — a storm that can bring drastic changes to the weather on the Hawaiian Islands, mainly during the winter months, and should always be taken seriously.

To break the term Kona low down to its most basic parts, the term "Kona" is a Hawaiian word that means leeward and describes winds with a southerly component. Hawaii's Big Island is also home to Kailua-Kona, a town on the western side of the island. Meanwhile, "low" refers to an area where barometric pressure is lower than normal, creating rising air and often times creating stormy weather.

But what makes a Kona low different from a regular low or storm? 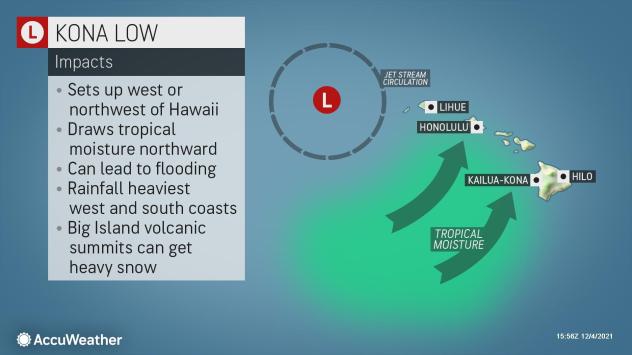 A Kona low produces moist south to southwest winds across the Hawaiian Island chain including Oahu, Molokai, Maui and the Big Island, which is quite a stark contrast from the prevailing east-northeast trade winds that occur most of the time.

Kona lows also have a tendency to tap into tropical moisture from the south that is transported north into the southern and western portions which can help to lead to torrential rainfall even in a major Hawaiian city like Honolulu.

Another characteristic of the southern and western portions of the Islands that make them susceptible to flooding is that the prevailing winds are not favorable for rainfall in the region majority of the year. As a result, there is less vegetation and shallower soil in these areas of Hawaii, further enhancing the flooding potential when heavy rains bear down on the region due to run off.

Landslides and mudslides are often a major concern during a Kona low event. Torrential rains can impact the western and southern portions of the islands, as the multitude of volcanoes that dot the Hawaiian state have harsh inclines and extreme variations in elevation.

"These storms typically approach Hawaii from the northwest and then push cooler or colder air across the islands," Smerbeck explained.

In some cases, heavy snow may even fall across the highest volcanic summits of the Big Island of Hawaii (Mauna Kea and Mauna Loa) where elevations reach near 14,000 feet. In some situations, blizzard warnings and winter weather advisories can be issued.

While the mercury drops during a Kona low weather pattern, gusty west to southwest winds and large waves are also a product of these powerful storms. Oftentimes, coastal flooding along south-facing beaches occurs and wave heights can be significant beyond the protection of the reefs. While surfers in the area may be tempted to take advantage of the large waves, dangerous rip currents are a major concern with Kona lows.

AccuWeather tropical meteorologists also noted that on a rare occasion where a Kona low occurs in the late summer to early autumn timeframe, the counterclockwise circulation around the storm may cause a tropical storm to either get very close to or be forced away from the islands. A Kona low could also evolve into a subtropical and tropical storm if conditions are favorable for tropical development in the region.

For more in weather news: