Elementary school students across Vermont were given the important job of naming the state's snowplows -- and they didn't disappoint. 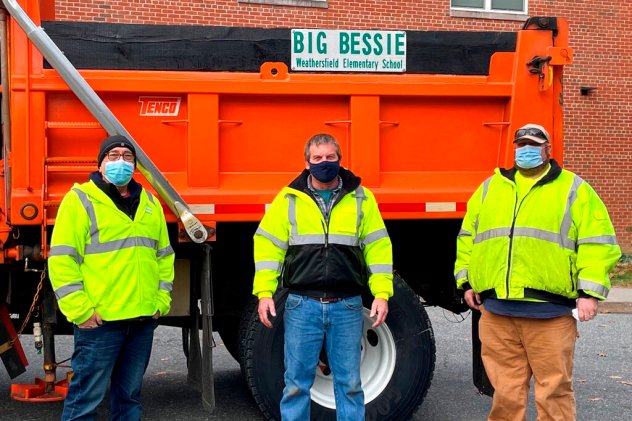 Vermont Agency of Transportation workers Joe Ruzzo, Ron Laplante and Seth Kimball, from left, post at the side of "Big Bessie," a snowplow truck, on Nov. 17, 2021, outside the Wethersfield Elementary School in Ascutney, Vermont. Vermont school students participated in the state transportation department's Name a Plow contest to come up with names for the snowplows serving their communities. The entries ranged from "creative and clever, to cute and silly," the agency said. (Principal Brian Martes/Wethersfield Elementary School photo via AP)

This winter, a Storm Trooper will be patrolling the streets of Vermont -- along with Darth Blader, Snowbegone Kenobi and Luke Snow Walker.

Elementary schools across the state partook in a naming contest during the fall for snowplows belonging to the Vermont Agency of Transportation (VTrans) -- and the participants went all out with their creativity. Joining the Star Wars-inspired brigade out on the streets are a few gems like The Ice Crusher, Snow Place Like Home, William Scrape-spheare, and, simply, Steve.

The Minnesota Department of Transportation (MnDOT) held a similar contest starting back during mid-December of 2020, though invited anyone across the state to submit ideas for a snowplow name. More than 22,00 ideas were sent in, which the MnDOT then narrowed down to 50 names and called upon the public to vote for their favorite. Among the top three winners were Plowy McPlowFace; Ope, Just Gonna Plow Right Past Ya and Duck Duck Orange Truck. Darth Blader also made an appearance in the top eight names. 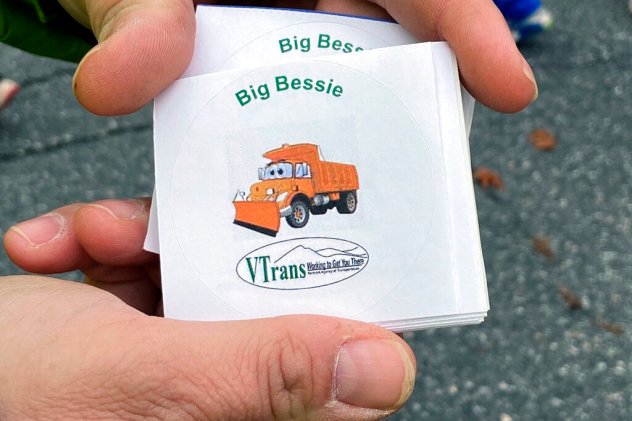 A sticker showing the snowplow "Big Bessie" is shown on Nov. 17, 2021, outside the Wethersfield Elementary School in Ascutney, Vermont. Vermont school students participated in the state transportation department's Name a Plow contest to come up with names for the snowplows serving their communities. The entries ranged from "creative and clever, to cute and silly," the agency said. (Joe Ruzzo/Vermont Agency of Transportation photo via AP)

"We thank everyone for their votes and participation in this fun contest, and through the process, becoming more aware of our snowplows, the tireless women and men who operate them and the work necessary to keep our roads safe," Commissioner Margaret Anderson Kelliher said back during March when the winning names were released.

Officials at VTrans had a similar goal in mind with the Name a Plow Program for Elementary Schools, in which they paired one of their 250 orange snowplows with a school. According to the list released by VTrans, 163 of the machines were given a name.

"Many of us saw the news coverage that went viral last year about the tradition in Scotland of naming their snowplows. While keeping Vermont's roads safe for winter travel is serious business, naming the snowplows sounded like fun," Transportation Secretary Joe Flynn said in a press release issued in October. "We hope that Vermonters will support this opportunity for children throughout our state to see the name they created on a snowplow that is maintaining Vermont's highways."

A handful of states across the nation are still hiring snowplow drivers ahead of the onset of winter, with states like Ohio, Pennsylvania, Michigan, Oregon, Missouri and Colorado looking to hire over 100 employees to fill the positions.

Secretary of Education Dan French added in the press release that the program "is a great way for students to learn about the important work that goes into making Vermont a wonderful place to live, work, and play in the winter months."