Temperature swings, fast-moving storms remain in the forecast for Northeast

Quick-hitting storms will continue to dart across the northern tier of the U.S. in the coming days and create brief lake-effect snow events and unleash strong wind gusts across parts of the Midwest and Northeast. However, AccuWeather meteorologists say a change in the weather pattern is on the horizon, one that will favor periods of more persistent cold air as the storm track shifts southward.

"The month of November brought big swings in temperature, but those rounds of chill and warmth lasted for several days at a time," AccuWeather Meteorologist Dean DeVore said. "During the past week, the warm and cold air continued to fight for dominance over the area, but the duration of the temperature flips became much shorter. These fast-paced temperature flips will continue into the first part of the new week."

During the atmospheric handoff from colder air to milder air, just enough moisture will surge in with the storm to bring showers rather than snow to most locations. The snow from this storm will be confined mainly to the northern tier of the Plains and Midwest.

Gusty showers swept through the Northeast on Sunday, bringing quick hitting downpours and winds that gusted over 50 mph in some spots. In New York City, half an inch of rain was observed, and similar totals were observed across much of the Northeast states.

As drier air pushes back in for Sunday, temperatures do not look as cold immediately behind the storm compared to those that the last couple of storms have delivered, according to DeVore.

Yet another fast-moving storm will push from the Central states into the East during the early and middle part of this week, and mild air will pay a brief visit during this time. Areas of rain and breezy conditions will spread from the Ohio Valley to the Northeast from Tuesday to Wednesday.

How much longer will temperatures keep flip-flopping? 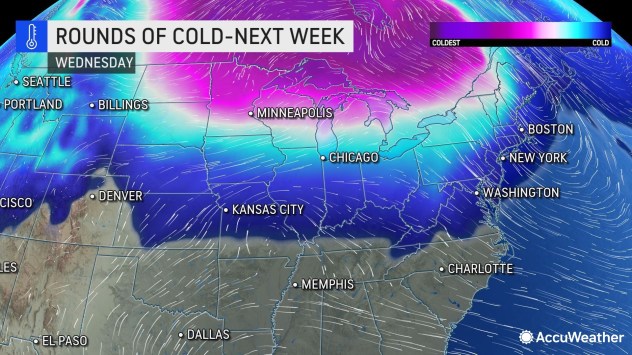 Much colder air that is forecast to build across Canada early this week has eyes on areas farther south in the central and eastern U.S. as the week progresses.

An upcoming pattern change later this week that will last through the middle of December may not only allow cold air to gain more of a foothold in the Midwest, Northeast and interior South, but a shift in the storm track could also create opportunities for snow much farther south.

"As storms continue to move in from the Western states, there may be one or more rounds of accumulating snow that set up from parts of the central Plains to the Midwest," AccuWeather Chief On-Air Meteorologist Bernie Rayno said. "One such storm may move along with a band of snow in the middle of the nation from Thursday to Friday."

"Depending on how much cold air hangs on in the vicinity of the storms, it is getting to be the time of the year to look for increasing chances of general accumulating snow for portions of the central and southern Appalachians, mid-Atlantic and southeastern New England regions," Rayno added. "The upcoming pattern fits the time of the year." 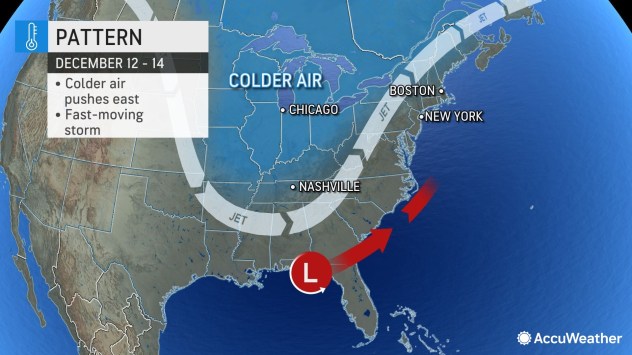 At the very least, storms that move along will attempt to bring snow farther south and closer to the coast than at any point so far this autumn. The storms may no longer just be rain producers for much of the Midwest and Northeast as well as parts of the interior South, AccuWeather forecasters say.