Two storms will drop southward along the Pacific coast into this weekend and bring heavy rain and mountain snow to a large part of California, AccuWeather meteorologists say.

The first storm already brought the first measurable snowfall of the season to Seattle on Tuesday with just under an inch falling into the afternoon hours. The storm, which focused on the Washington and northern Oregon Cascades on Wednesday, ended up dumping up to a few feet of snow over the high country in the region with difficult to dangerous travel conditions expected over the passes for a time as temperatures hovered in the teens and 20s F. 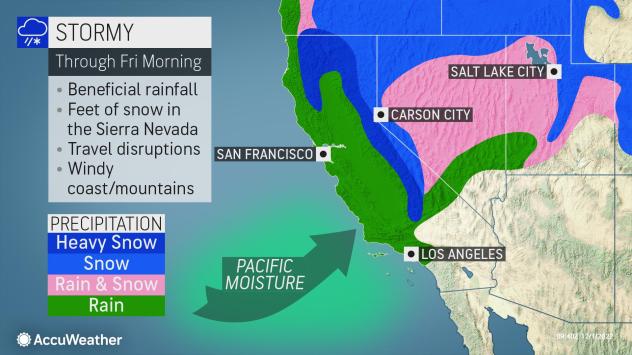 As the storm continued to pivot southward along the Pacific coast, travel conditions were deteriorating over the higher terrain along I-80 in the Sierra Nevada of California.

About 1 to 4 feet of snow will fall with substantial blowing and drifting likely, forecasters say. Roads may become impassable for a time.

As snow buried the northern and central Sierra Nevada, rain fell along the coast and much of the interior valleys of Northern California.

The Fresno, California, area and much of the San Joaquin Valley got a thorough soaking from the storm.

While the inches of rain and feet of mountain snow will put a big checkmark in the positive column for long-term drought, more rain and mountain snow will be needed throughout the winter season to make a major difference. Much of California and large portions of the western United States continue to experience moderate to exceptional drought conditions. 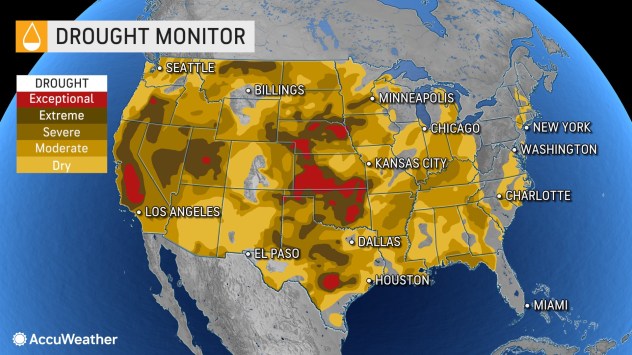 California's new water year began on Oct. 1, which is roughly the beginning of the rainy season. Since Oct. 1 through Nov. 30, 2022, rainfall has generally ranged from 30-60% of the average across the state. However, the Los Angeles area has received above-average rainfall with close to 2 inches falling in the downtown area, as opposed to a normal of 1.32 inches. The water year concludes at the end of September.

South of the San Gabriel Mountains, rainfall will progressively become more limited. Since the storm will weaken enough prior to turning inland over Southern California, the amount of rain and mountain snow should diminish to a few showers upon reaching the Los Angeles and San Diego areas.

"It is likely that much less than 0.50 of an inch of rain will fall on Los Angeles from the first storm, but enough is likely to occur to make for slick road conditions and a slow morning commute in some areas on Friday," AccuWeather Senior Meteorologist Heather Zehr said.

Snow is likely to remain above most road levels over the Grapevine north of Los Angeles, but some of the ridges and peaks in the region may pick up a couple of inches into Friday. A rain shower or two may survive the trip farther south to San Diego and over the mountains near the Palm Springs, California, area.

Another storm will hover near California coast this weekend

This weekend, a second storm will drop southward and may linger just off the coast of California.

"Some rain should pivot into the San Francisco area on Saturday," Zehr said. "More general rain may develop on Sunday across Northern and Central California and perhaps as far to the south as Southern California." 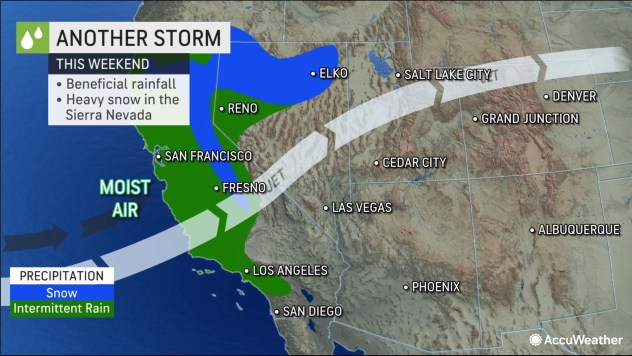 The extent and magnitude of the rain and mountain snow that the storm unfurls from Sunday to Monday are still questionable at this early stage, according to AccuWeather's team of forecasters. But, while the storm is not likely to bring an excessive amount of rain and mountain snow to Southern California, it can provide another boost in ground moisture, some runoff into area streams and reservoirs and more snow for the Sierra Nevada and across Northern California in general.

It is possible that parts of the Sierra Nevada pick up a fresh 1-3 feet of snow from the second storm during the first part of next week. At the very least, there will be some opportunities for rain and mountain snow over the upcoming seven days for the drought-stricken state.