Nor'easter blasting the eastern US with feet of snow

Areas closer to the coast will endure fierce winds and flooding. Power outages and travel disruptions will be likely following the storm.

With the official start of winter just days away, Mother Nature began doling out a full-blown monster of a winter storm. The storm began to take shape Wednesday morning, as AccuWeather meteorologists had predicted since last week, with snow, ice and rain stretching from the Ohio Valley all the way down to the Southeast. Heavy snow and whiteout conditions encompassed northern and central Pennsylvania through southern New York state and southeastern New England during Wednesday night. As AccuWeather Chief Broadcast Meteorologist Bernie Rayno put it, "All the ingredients” had come together to bring a major nor’easter to a huge swath of the eastern United States.

By early Thursday morning, many areas across central and northern Pennsylvania had picked up 1-2 feet of snowfall with flakes continuing to fly. Around Binghamton, New York, snow totals had already exceeded 2-3 feet. In New York City, more snow has fallen with this storm than all of last winter.

The storm is responsible for a deadly accident along a stretch of Interstate 80 in Pennsylvania. Thundersnow was reported in central portions of the state, an indicator of the potent nature of the storm.

The storm, however, is a fast-moving one, and although it’s been bringing snowfall rates of 2 to 4 inches per hour to parts of the region, that quick forward speed will prevent the system from turning into an all-out “snowmaggedon,” at least in the major Interstate 95 cities, AccuWeather forecasters said. But make no mistake, the team cautioned, this is a big storm bringing whiteout and blizzard conditions to some places as well as power outages where the storm hits the hardest. 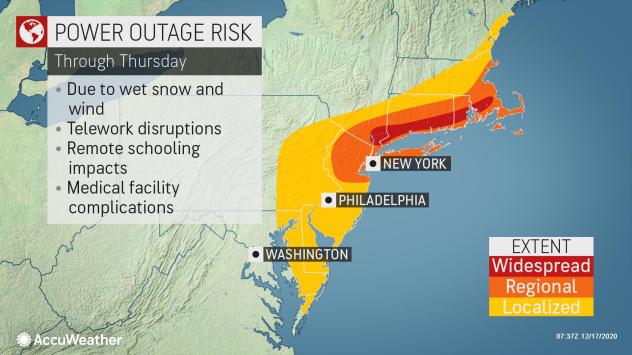 By Wednesday night, most of the power outages were centered on Virginia, where snow, freezing rain and sleet weighed down utility lines.

The National Weather Service issued winter storm watches and warnings on Tuesday across numerous states spanning from North Carolina to Maine ahead of the storm. More snow has fallen from this nor'easter than from all of the storms last winter combined in Washington, D.C., and Philadelphia thus far. 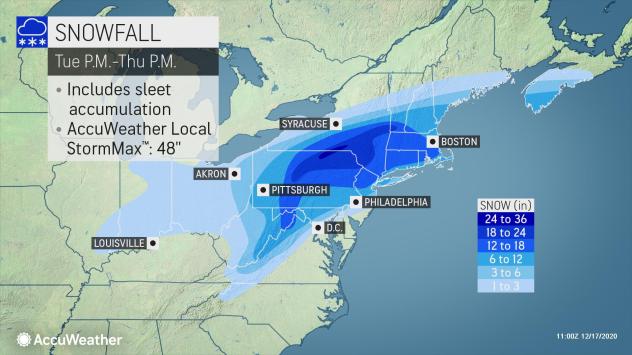 Snow will come down hard enough that thunder and lightning may accompany the precipitation in the hardest-hit areas as the storm continues through Thursday. The storm has the potential to unload a large swath of 1-2 feet of snow. Enough snow is anticipated to quickly overwhelm plowing operations, strand motorists and shut down travel from eastern West Virginia to parts of Massachusetts, Rhode Island and Connecticut.

It will be a major storm in New York City, where the snow is forecast to pile up to a depth of 10 to 15 inches. By midnight Thursday, 6.5 inches of snow and sleet had been reported in Central Park. If snow changes over to sleet and a bit of rain sooner than anticipated, then the storm total will end up under 10 inches. However, if little to no mixing occurs in the Big Apple, snowfall can top 15 inches. 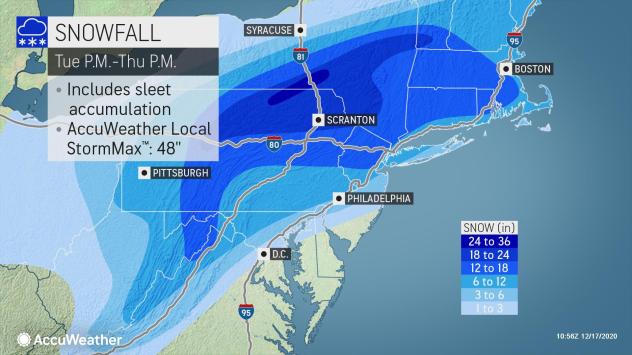 Providence, Rhode Island, and Boston are forecast to pick up around a foot of snow from the storm. Significant blowing and drifting snow will add to the dangers at the height of the storm from New York City to Boston, limiting visibility and blowing snow back onto roadways.

The combination of wind and snow, which is likely to be dry and powdery in nature north and west of New York City, in northern New Jersey, the Hudson Valley and western Connecticut will create true blizzard conditions and whiteouts.

AccuWeather users can follow along with storm projections by visiting WinterCast for Boston and New York City.

Farther inland across areas from central, northern and eastern Pennsylvania to northern New Jersey, southeastern New York state and southern and central New England, a storm of debilitating proportions and a general 12-18 inches of snow is predicted. The heaviest snow will bury areas from central, northern and eastern Pennsylvania, including along Interstate 80 to the Catskills and across part of the lower Hudson Valley and southern tier of New York state, with a total of 18-36 inches of snow forecast and an AccuWeather Local StormMax™ of 48 inches.

Through Thursday morning, the strongest winds will occur from the upper mid-Atlantic coast through southeastern New England with gusts frequenting 40-50 mph from the storm. An AccuWeather Local StormMax™ of 70 mph is forecast for southeastern Massachusetts, but wind gusts ranging from 30-40 mph will cause extensive blowing and drifting snow from eastern Pennsylvania to parts of central Massachusetts, southeastern New Hampshire and the southern tip of Maine. 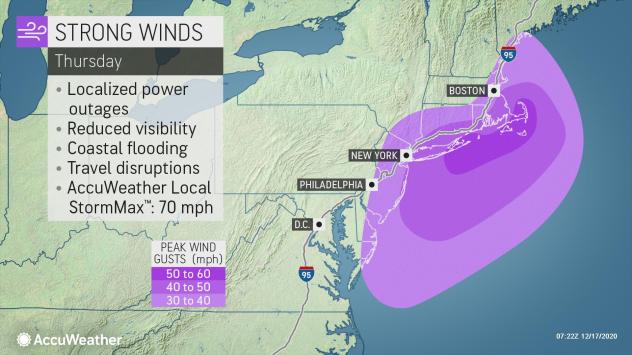 AccuWeather meteorologists and government officials are urging people not to travel during the storm due to the risk of becoming stuck and hindering snow removal crews.

"Motorists that become stranded and ride out the storm in their vehicles will be at risk for carbon monoxide poisoning should their exhaust system become covered in snow," according to AccuWeather Meteorologist Jake Sojda.

Shipping delays, school closings and power outages are anticipated from this blockbuster storm. Even where some students and people are working from home during the storm, power outages could throw a big wrench into that plan, especially near the coast where the snow will be wet and clinging in nature and strong winds are expected to accompany the storm.

Along the coast, a different hazard is expected along with the whipping winds. There is the likelihood of tidal flooding, but the fast movement of the storm also limit coastal flooding problems and keep impacts minor.

The wintry precipitation is forecast to end Thursday morning and midday in the mid-Atlantic and central Appalachians and finally taper off during Thursday afternoon and evening in New England. 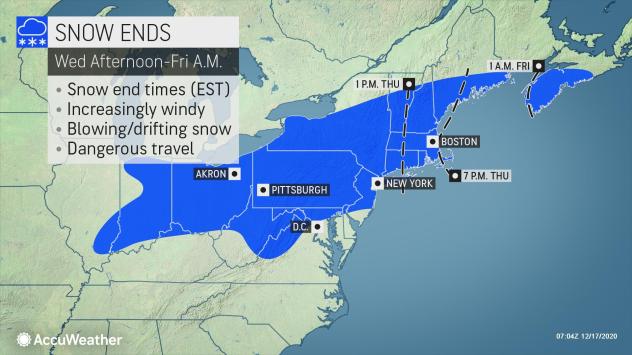 Everything you need to know about winter tires and top picks for safety
Snow blowers worth the investment this winter
Impending nor’easter could pack more snow for several cities than every storm last winter
Are snow days a thing of the past amid the pandemic?
LIVE: Winter storm beginning to take shape

Folks who have been dreaming of a white Christmas could end up getting their wish this holiday season, even though the storm is arriving just about a week before the holiday as the weather is likely to remain chilly enough long enough to allow the heaviest snow that falls to remain on the ground into Christmas Day.

In the days following the storm, a small amount of melting during the daylight hours will lead to runoff that is likely to freeze into sheets of ice during the evening hours. Motorists and pedestrians are urged to drive and tread with caution due to the potential for black ice. Road crews and home and business owners will need to regularly apply ice-melting compounds to make surfaces safe. 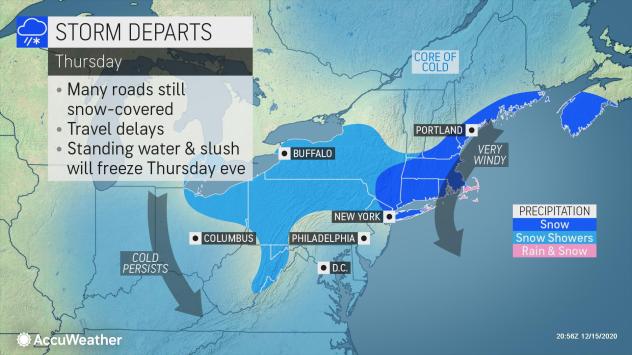 AccuWeather meteorologists have been tracking the potential for a disruptive snowstorm across the eastern U.S. since late last week.

AccuWeather’s Winter Weather Center​​​​​​​ has snowfall totals for the most impacted cities. Keep checking back on AccuWeather.com and stay tuned to the AccuWeather Network on DirecTV, Frontier and Verizon Fios.