Areas closer to the coast will endure fierce winds and flooding. Power outages and travel disruptions will be likely following the storm.

Widespread disruptions are sweeping across the northeastern United States as a potent snowstorm has unloaded more snow in one day in some places than every winter storm from last winter combined.

AccuWeather forecasters have been tracking the possibility for a blockbuster snowstorm since the middle of last week. And forecasters with the National Weather Service also began sounding the alarm about the storm. “A Nor'easter will affect the region bringing what will likely be the most impactful winter weather in several years,” the National Weather Service office in Mount Holly, New Jersey, said on Monday.

More than a foot of snow has already fallen across central and northern Pennsylvania as of Wednesday night. In southern New York state, including around the Binghamton area, snow totals have been in excess of 2 feet. Despite the heaviest snow missing the Interstate 95 corridor, it could still be a shock for residents in and around New York City, Philadelphia, Baltimore and Washington, D.C.

“The cities along the Northeast I-95 corridor have also been in a snow drought,” AccuWeather Senior Meteorologist Courtney Travis said. 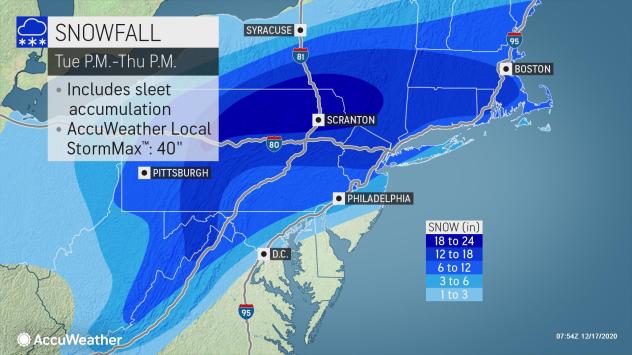 Last winter was one of the least-snowiest seasons on record for the mid-Atlantic, including in Philadelphia which measured just 0.3 of an inch of snow. This was the second-lowest winter snowfall total for the city since record-keeping began.

A similar story unfolded in Washington, D.C., with the nation’s capital receiving just 0.6 of an inch of snow throughout all of last winter, significantly lower than the 18 inches of snow that falls in a typical winter. Ronald Reagan Washington National Airport only recorded a trace of snowfall with this event, with most of the precipitation coming in the form of rain.

“Last winter, the pattern just never really set up in the right way to bring a snowstorm to the mid-Atlantic,” AccuWeather Meteorologist Jake Sojda said.

“For much of the winter, the storm track favored a more western trajectory, closer to the Ohio Valley,” Sojda explained. “This repeatedly caused storms to bring warm air into the Northeast and mid-Atlantic ahead of them, and mainly rain with every storm.” 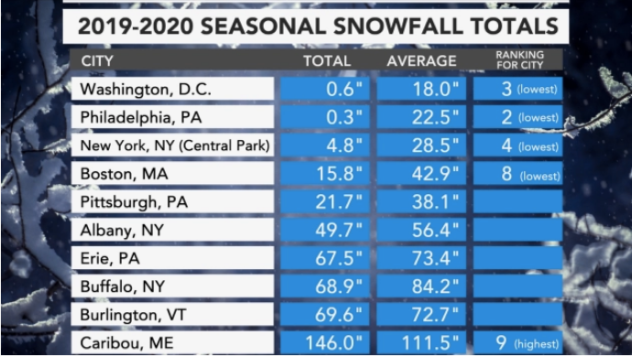 This week’s storm will be a shock to the system for people that have moved to the Northeast since the snow drought has started, as well as long-time residents that may have forgotten where they placed their snow shovels when they last used them two winters ago.

“The fact that a potentially historic snowstorm has arrived so early on this winter, right on the heels of such a snowless winter last year, adds to the contrast and apparent hyperbole of the storm,” Sojda said.

By December standards, the storm is projected to be one of the largest storms in recent memory.

Philadelphia sees snowfall of 4 inches to 8 inches from a single storm, on average, once every 4.33 years during the year's final month, and it's been a while since the city has picked up more than 6 inches from a single event in December. “The last time that Philadelphia received more than 6 inches of snow on a single day from a snowstorm in December was on Dec. 8, 2013,” Travis said.

By 7 p.m. EST Wednesday, 5.7 inches had been recorded at Philadelphia International Airport, with snow mixing with sleet and freezing rain by this point. 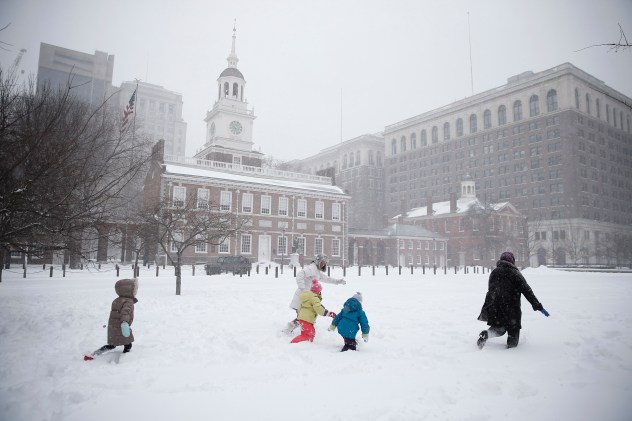 A family plays on the snow on Independence Mall, Saturday, Jan. 23, 2016, in Philadelphia. (AP Photo/Matt Slocum)

Farther up I-95, New York City saw a total of 4.8 inches of snow last season in Central Park, well below its 28.5-inch average. AccuWeather is forecasting 10 inches to 15 inches of snow to fall in the Big Apple from this storm, more than enough to eclipse last season's snow total in one fell swoop. By midnight Thursday, the city had easily eclipsed this mark as 6.5 inches of snow and sleet had been measured at Central Park, with snow continuing to come down.

On average, New York City gets a 6-inch to 10-inch snowfall during December every 5.4 years. Prior to this snowstorm, the last time New York City saw more than 6 inches of snow from a single storm was on Dec. 26-27, 2010, when about 20 inches fell.

Pick your winter: 3 ways to define the season with the least amount of sunshine
Everything you need to know about winter tires and top picks for safety
What exactly is a nor'easter?

This year could be the year that those dreaming of a white Christmas have their dreams come true due to the December snowstorm, especially in areas where snow is measured in feet. Early Thursday morning, forecasters raised the AccuWeather Local StormMax™ from 30 inches to 40 inches, due to the heavy snow band setting up across the southern tier of New York state.

In the immediate wake of the storm, snow that melts during the day will likely freeze at night and make some untreated surfaces icy. The conditions is likely to greatly raise the potential for slip and fall incidents and auto accidents in the days and nights following the snowfall.

Up to dozen missing as Italian island hit by destructive landslides