In addition to heavy snow, the storm will also pack a punch with strong winds.

After pummeling California with heavy rains and feet of snow, the same storm system moved east across the U.S. to deliver a blast of winter weather to the Midwest on Saturday and Sunday before moving on to pester the Northeast.

As Chicago’s second major winter storm in a week, the storm dumped around 8-12 inches of heavy, wet snow over the weekend. Conditions started to deteriorate across the Windy City around 2 p.m. CST on Saturday as the winter weather invaded the area from the south and continued to intensify.

Accidents were already ramping up by 9 p.m., local time, on Saturday across southwestern Ohio as snow began to accumulate, according to the National Weather Service. In the Cincinnati area, 1-2 inches of snow already begun to accumulate on roadways shortly after the storm moved into the area.

The snow is coming down in Chicago this evening. If you must drive, be careful and take your time. #CPDMediaCar pic.twitter.com/321MGOWirk

Glendale, Wisconsin, recorded the most snow in the region, with 13 inches piling up over the weekend. 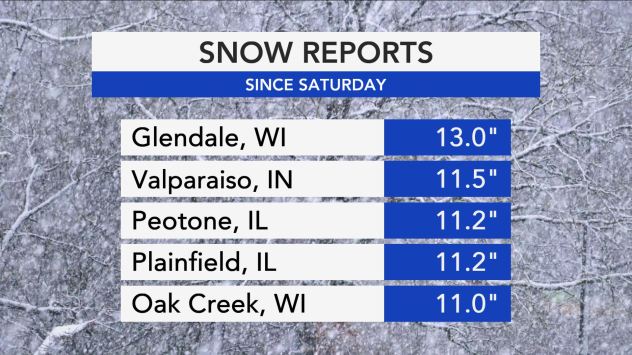 The snow didn't spare roadways or runways, which led to countless travel disruptions and delays. Midway Airport recorded 11 inches of snowfall by Sunday evening, according to the National Weather Service.

Across the Northeast, flight cancelations and delays began to roll in for Monday. John F. Kennedy International Airport in New York canceled over 150 flights from the airport that were scheduled for Monday, according to FlightAware.com. The cancelations made up 75% of all flights the airport had scheduled for Monday. LaGuardia Airport, also located in New York, canceled 86% of all flights originating from the airport, equating to over 100 flights.

Newark Liberty International Airport in New Jersey has the second highest number of cancelations for Monday at 146, which equated to 68% of all flights departing from the airport for the day.

Chicago officials announced 287 snowplows were deployed across the city on Saturday afternoon to stay ahead of the winter storm. Statewide, IDOT has more than 1,800 trucks and equipment available, however, where snowfall rates reach or exceed 1 inch per hour, snow removal crews had a difficult time keeping roads clear of snow and effectively safe for travel.

"Our crews are still out in full force, which is more than 130 trucks out there," INDOT spokesman Hunter Petroviak said in a social media update early on Sunday morning. "Road conditions aren't great right now. That's because we had a lot of snowfall coming down at a heavy, heavy rate, and so those trucks, as soon as they plow, more snow comes down on the roads."

As the winter storm's reach expanded farther east at the end of the weekend, areas in North Carolina, including Greensboro and Raleigh, received a rare dose of a wintry mix of freezing rain, sleet and snow on Sunday.

Troopers across the state responded to more than 34 traffic crashes by Sunday morning. No injuries were reported while officials reported most of the wrecks involved damage to vehicles. 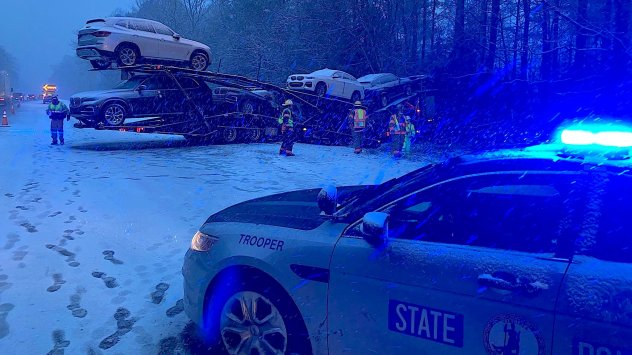 Four Virginia firefighters were taken to the hospital for minor injuries after a Henrico County fire truck overturned on a call Sunday morning due to snowy road conditions. Officials said the truck spun on the road, traveled off the paved roadway and overturned, but no other vehicles were involved in the accident.

Slippery road conditions caused @HenricoFire Engine 305, from Lakeside, to spin & overturn on Woodman Rd while responding to a service call. The firefighters exited & were taken to hospitals with non-life threatening injuries. Woodman is closed at Spider Dr. pic.twitter.com/CavcvsPCvL

As the rest of the Northeast prepares for the snowstorm, Maryland Gov. Larry Hogan also asked for travelers to give enough space to road workers for them to clear the roads safely. Hogan said the road crews will be working 24 hours a day until they are cleared and also called on people to avoid unnecessary travel amid the storm.

Ahead of the first flakes in New York City, the school district announced all buildings will be closed on Monday, therefore classes will be held remotely. After-school programs, adult education, food distribution sites and other programs will be canceled as well. The Big Apple has not announced the status for schools on Tuesday, CBS New York reported.

According to AccuWeather meteorologists, as the storm that swept through the Midwest weakens over the Ohio Valley and a new storm strengthens along the mid-Atlantic coast, snow and strong winds will whip across the Northeast into the middle of the week.

How to stop glasses from fogging up while wearing a mask in winter
'Dangerous' winter storm creates hazardous travel in Arizona
Deadly tornado blasts Alabama town, leaves at least 1 dead and dozens injured