Extreme cold sends temperatures to 54 below zero in Siberia

Extremely cold air sent temperatures well below zero on Wednesday in Siberia, resulting in the coldest weather of the season thus far in a region known for being home to some of the harshest weather on Earth.

The frigid weather also reached portions of the Middle East and led to accumulating snow as far south as the mountainous region of northern Iraq.

"A persistent and slow-moving trough near the Caspian Sea has allowed some cold air in Russia to push into northern Iran and Iraq," explained AccuWeather Lead International Forecaster Jason Nicholls.

A trough is a dip in the jet stream, which is a band of strong winds 4-8 miles up in the atmosphere that separates cold air from warmer air. That dip led to a direct discharge of air from the Arctic into the central and eastern Siberian regions of Russia. 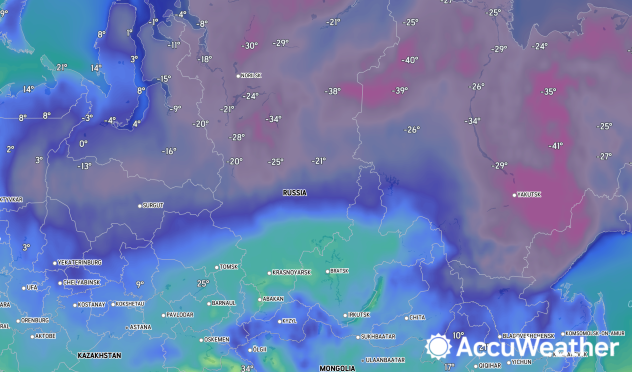 A sampling of temperatures in Russia and nearby Asian nations, as of late Wednesday local time.

On Wednesday morning, Segyan-Kyukl, a remote town in northeastern Russia with a population of 796 people, recorded a low temperature of 53.5 degrees Fahrenheit below zero (47.5 degrees Celsius below zero). By late afternoon Wednesday, local time, temperatures in the region had only rebounded to hover in the 20 to 40-degree F below zero range (30 to 40 C below zero).

On Thursday morning, the mercury in Segyan-Kyukl was even lower, as the temperature bottomed out at a bone-chilling 54 degrees Fahrenheit below zero (47.8 degrees Celsius below zero).

While extreme, these shots of extremely cold air flowing into Siberia are not unusual for this time of year. In fact, this recent cold spell is coming on the heels of an unusually warm start to November.

"The areas of eastern Siberia currently experiencing the coldest weather of the season on Wednesday have been running 6 to 11 degrees Fahrenheit above normal for the month of November," added Nicholls.

In the larger population centers of southern Siberia, the cold is not as extreme, but it is still noticeable relative to the average for November. In Omsk, high temperatures will only be in the single digits and teens Fahrenheit (15 degrees below zero to 5 degrees Celsius) for the next week plus. This is a stark change from the first half of the month when temperatures averaged 12 degrees Fahrenheit above average, which is in the middle to upper 20s degrees Fahrenheit this time of year.

"Parts of the Middle East will remain cool over the next couple of days, then it will turn warmer this weekend," said Nicholls. He added that although a slight warmup is also forecast for eastern Siberia through the weekend, Siberians will have to brace for more extreme cold next week.

'That was scary': Teen pilot on epic journey slowed down by weather

EU now has enough natural gas to get through winter