Residents of Madrid are slowly shoveling out of Spain’s worst snowstorm in decades after rescuers had to free 2,500 drivers and three people died.

The region often referred to as the "Spanish Siberia" lived up to its nickname this week during and after the passage of Storm Filomena. After the blockbuster snowstorm slammed Spain late last week, frigid air produced one of Spain's coldest mornings in at least the last 20 years.

The temperature dropped to minus 13.4 degrees Fahrenheit (minus 25.2 degrees Celsius) in Molina de Aragón, which is situated in the mountains about 120 miles east of the capital city of Madrid, on Tuesday morning, local time. That temperature is the lowest for the month of January in the city since 1981.

Nearby, Teruel and Calamocha also dropped to minus 5 F (minus 21.0 C) and minus 6 F (minus 21.1 C) on Tuesday morning, respectively. Both numbers broke the record low for any month of the year for the cities. 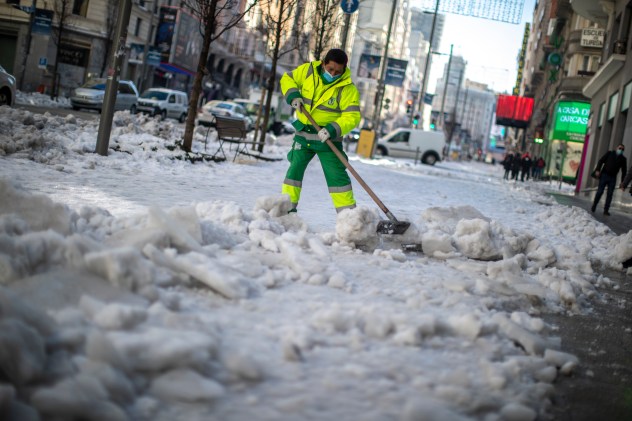 A staff worker clears the snow at the Gran Via Avenue in Madrid, Spain, Wednesday, Jan. 13, 2021. Much of Spain is struggling to return to normality three days after a 30-hour-long record snowfall that was then hardened by record-low temperatures, turning streets and roads into dangerous ice sheets in areas not used to extreme winters. (AP Photo/Manu Fernandez)

The Spanish Meteorological Agency (AEMet) calls these three northeastern cities the "cold triangle" as they often are the coldest locations in the country. Molina de Aragón typically reports low temperatures of 25.7 F (minus 3.5 C) during the month of January.

Even outside of this region where the harshest cold was felt, low temperatures plummeted. In Madrid, Tuesday morning's temperature struggled to reach 7.9 F (minus 13.4 C) at the airport, also a new record for the month since 1981.

The brutal cold comes days after the winter storm dumped around 15 inches (38 cm) in Madrid, the city's biggest snowfall since 1971.

At least seven people have died across the country due to the cold, according to the BBC.

For comparison's sake, the normal low temperature for the month of January in Novosibirsk, Siberia's largest city, is -4.2 degrees F (-20.1 degrees C).

But what causes such frigid temperatures to occur across a more temperate climate such as Spain's?

In addition to an already cold air mass situated over the Iberian Peninsula, the AEMet explained that any snow that melts during the day will quickly freeze again during the overnight hours. This layer of ice will reflect a large portion of the sun's rays back into the atmosphere limiting how much the temperature can climb during the day.

"Temperatures already starting at a lower point during the day drop like a rock during the overnight hours when skies are clear and winds are calm," added AccuWeather Senior Meteorologist Tyler Roys.

This combination of factors has led to fierce cold and more winter woes across much of the country during the early half of the week. Hospitals already overwhelmed with outbreak of coronavirus cases in Spain, one of the hardest-hit countries in Europe, and recovering after nurses and doctors were forced to work long hours and walk to work in the weekend's snow, have seen an increase in emergency calls.

One woman had to be rescued from a mountain path in Hervás, western Spain, after she injured her ankle slipping on the ice. A man in urgent need of insulin was spotted walking on the snow with crutches and rescued by helicopter, according to the BBC.

Spain's El País, a local daily newspaper, said the danger posed by icy road conditions has prompted what it described as "a titanic effort, something like a dystopian reality" as 1,300 snow-clearing vehicles continue to work to keep the roads free.

The newspaper reported that the damage from Storm Filomena is expected to cost hundreds of millions of euros. At least 150,000 trees in the Madrid area still need to be checked for damaged tree branches that could fall.

As of Tuesday, train services were still disrupted due to icy conditions in the Madrid area. While flights have resumed at the airport, there are still delays due to the wintry weather and trying to catch up after the cancelations from Filomena.

Frigid temperatures are one reason interior, northeastern Spain has been dubbed Spanish Siberia. Similar to the harsh region of central Russia, Molina de Aragón and Teruel are becoming Europe’s largest desert in terms of population.