Heavy snow feel around the coast of the Sea of Japan due to winter pressure distribution.

A potent winter storm pounded the west coast of central Japan from late last week into the weekend and buried some areas with more than 3 feet of snow (about 1 meter). Officials said at least 10 deaths were being blamed on the storm, which also wreaked havoc on travel by stranding 1,500 vehicles on a major highway.

The heaviest snow fell along the west-central coast of Japan across the prefectures of Niigata and Toyama. This region is no stranger to heavy snowfall, especially in the mountains just inland from the coast. However, unusually cold air moving across the region allowed heavy snow to fall down to sea level and in areas that usually do not get this heavy of snow.

Stranded - Vehicles are stranded in the snow on the Hokuriku Expressway in Fukui Prefecture on Sunday. Heavy snowfall continued across wide areas of the country via @JapanToday #Japan #Fukui” https://t.co/RstuwnGpDz pic.twitter.com/I8ESG5HUtt

The snow depth in the city of Toyama surpassed about 3.3 feet (1 meter) for the first time in 35 years, according to NHK, the Japanese Broadcasting Corporation.

The snow depth is a measurement of the snow on the ground through the winter season so far and is not a direct result of this storm system.

Even heavier snow fell farther to the north in Takada where an astounding snow depth of 8.2 feet (249 cm) was reported, according to the Japanese Meteorological Agency. The measurement was taken near sea level which makes the observation rather unusual. Typically, snow that deep is typically reserved for the nearby mountainous areas.

Snow depths in excess of about 10 feet (3 meters) are typically reported across some of the mountainous terrain of western Japan and have led to great ski conditions. 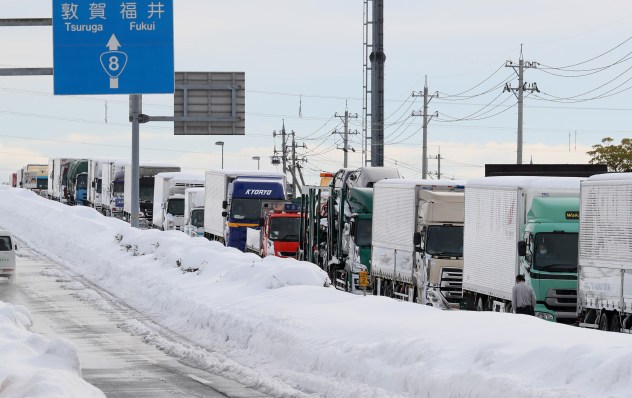 Fukui City was hit by heavy snow in Fukui Prefecture, a district along the Sea of Japan, on January 11, 2021. Dozens of vehicles were stuck in the snow, and Japan Self Defense Force officials removed the snow from the street. (The Yomiuri Shimbun via Reuters)

All of this heavy snow led to significant disruptions across the region late last week and through the weekend. Local media reported 10 fatalities resulting from the storm, several of which involved people being buried during snow removal work.

During the worst of the snow, about 1,500 vehicles were stranded on the Hokuriku Expressway in Fukui Perfection. The road is a toll road that runs along the west coast of central Japan. As of Monday evening, local time, all of the cars had been cleared, according to Kyodo News. This comes after 1,000 vehicles were stranded on a highway in Niigata after heavy snow in December. 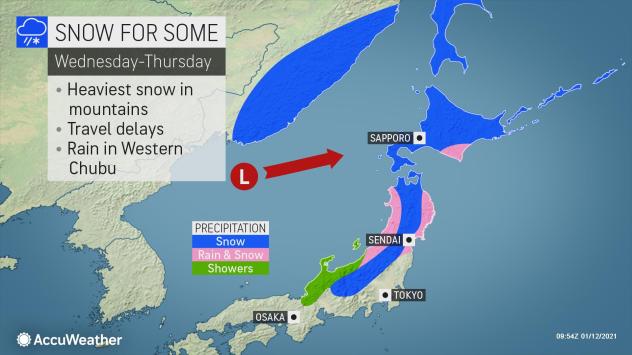 AccuWeather meteorologists continue to track the threat of more snow across the region through the course of the week, but the snow during the next few days is expected to pale in comparison to the snow that was seen late last week and into the weekend.

Through Thursday, a storm can bring rain and snow to northern Honshu and Hokkaido.

Accumulating snow is expected to be confined to Hokkaido and across the mountains of northern Honshu. Many of the lower elevations in Niigata and Toyama that were recently hit with heavy snow are expected to have rain showers or a mixture of rain and snow showers from this storm.

Milder air this week should allow snow to start melting in coastal areas. As such, residents will want to remain vigilant for snow and ice that could fall from buildings.

However, a surge of colder air after to storm could bring another round of sea-effect snow showers to coastal areas by the weekend.