'March Miracle:' The gift that keeps on giving for parts of the West Coast

Even though March 19 marks the beginning of spring, this dog is enjoying winter's last hurrah in Evans, Colorado, on March 19, trying to catch the falling snow.

A new series of storms taking aim at California will not pack the punch of the mega storm being called a 'March Miracle' from early last week in terms of Sierra Nevada snowfall, but it is expected to provide more beneficial rain and mountain snow to the region.

Aside from potentially slowing travel and possibly shutting down Donner Pass in California early week, few problems are anticipated with the new storm series. 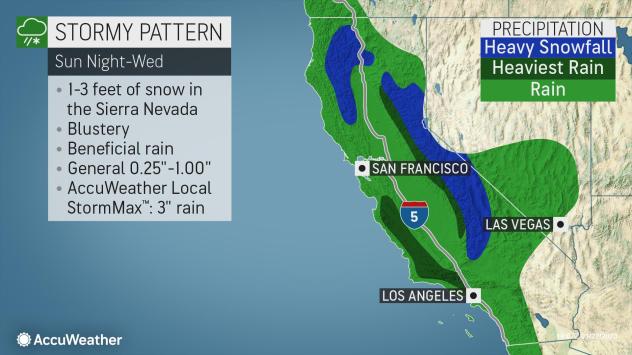 "The long-term benefits from the upcoming storms are likely to outweigh the risks of isolated flash flooding and mudslides, most of the upcoming rainstorms deliver," AccuWeather Meteorologist Brett Anderson said.

Rainfall since the official start of California's rain year, which officially begins on July 1, has been lean to say the least over much of the state. (The wet season in California typically begins in early October.)

"There is the potential for this storm series to bring rainfall on par with that of the storm around the middle of the month, to the central and northern parts of California," Anderson stated. 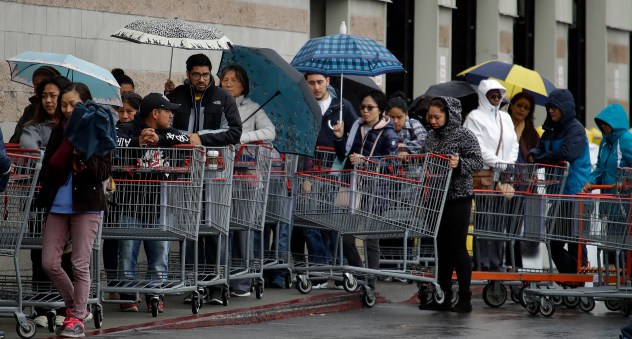 Costco customers wait in the rain to enter the store on Saturday, March 14, 2020, in San Leandro, Calif. Efforts to stop the spread of the coronavirus in California are affecting virtually every facet of life in the Golden State in ways big and small — and in some cases, surreal. (AP Photo/Ben Margot)

AccuWeather meteorologists anticipate a general 0.25 of an inch to 1 inch of rain from the storm series set to span Sunday night to Wednesday. An AccuWeather Local StormMax™ of 3 inches is anticipated along the west-facing lower slopes of the central Coast Ranges and Sierra Nevada.

Meanwhile, rain in much of coastal Southern California has been more robust from the recent storm siege and also in the long-term with rainfall close to average since July 1.

Southern California typically receives an order of magnitude less of rain per year than low elevations farther north across the state, including around the Interstate 80-corridor. However, rainfall from July 1 to March 20 around Los Angeles has been 9.51 inches compared to an average of 13.11 inches, or about 77 percent of normal.

Rainfall is actually above average for the rain year in some areas such as Riverside, San Diego and Palm Springs, California.

Riverside has received 9.54 inches of rain, compared to an average of 8.97 inches through March 20 with San Diego at 107% of average and Palm Springs at 104% of average.

This particular storm series is likely to bring very little to no rainfall to the California deserts. However, some showers may develop over parts of southern Nevada and portions of Arizona. 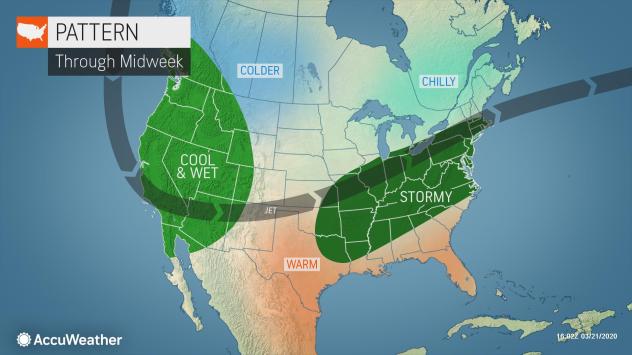 Snowfall from the mid-March storm madness has been phenomenal over the Sierra Nevada with some locations around the Lake Tahoe, California, area receiving more than 100 inches of snow.

"Snowfall with this storm will probably be on the order of 1 to 3 feet over the high country of the Sierra Nevada with perhaps the heaviest amounts centered around the Lake Tahoe area," Anderson said.

The rain and especially the high mountain snow will go a long way toward keeping reservoirs filled through the upcoming dry season.

The precipitation should also prevent an early and severe start of the wildfire season. However, ample rain during the winter and early spring tends to boost the growth of brush, which later dries out and become fuel for wildfires.

Typically, rain and mountain snow tail off substantially during April and May with little to no precipitation from June through September and part of October.

Even though wildfires can occur year-round, it is during the latter part of the dry season when large wildfires are most common.

"Looking ahead, another storm system may attempt to bring some rain and mountain snow toward the end of March," AccuWeather Meteorologist Rob Miller said.

The storm track tends to retreat northward along the Pacific coast during the spring, and it appears as though that will be the case this spring.

"After Wednesday, March 25, much of the precipitation will be north of San Francisco and the Sacramento Valley," Paul Pastelok, AccuWeather lead long-range meteorologist, said.

"However, much of the Sierra Nevada, especially central and northern areas, will continue to try to catch up to seasonal average snowfall and could end up fairly close to that average by the time the snow season ends," he said. 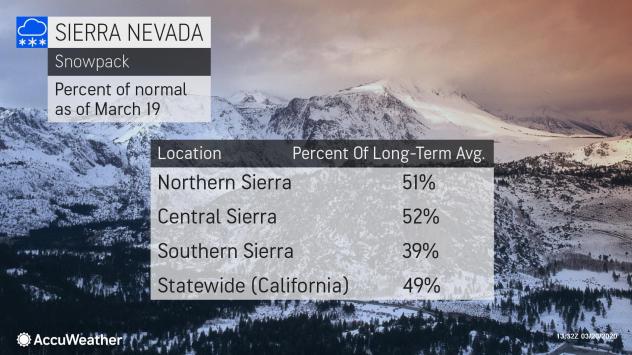 The high country of the central and northern Sierra Nevada receives an average of 400 to 500 inches of snow per year.

In the meantime, before the next series of storms arrives early next week, the weather this weekend should provide some sunshine to most areas, offering an opportunity for people to step out for some fresh air during the COVID-19 shelter-in-place. Studies have shown that UV exposure may inhibit the spread of the coronavirus. Experts urge people to continue following social distancing practices and other Centers for Disease Control and Prevention guidelines for staying safe amid the pandemic, even when outdoors.