Researchers studied 100 different Chinese cities that had more than 40 cases of COVID-19 from Jan. 21 to 23.

A team of researchers unveiled the results of a new study last week that looked at how temperature and humidity may affect the transmission of COVID-19, the illness caused by the new coronavirus.

The study is the latest in a limited but growing body of research, not all of which has been peer-reviewed, that examines the effect of weather on the spread of the SARS-Cov-2 virus, which causes the COVID-19 illness. 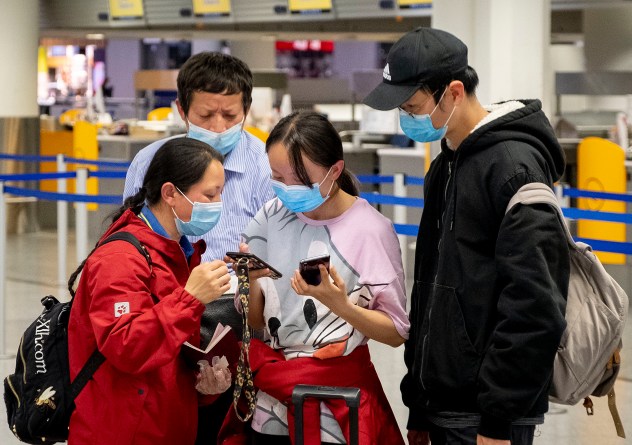 The researchers studied 100 different Chinese cities that each had more than 40 cases of COVID-19 from Jan. 21 to 23. According to AccuWeather Senior Weather Editor and Meteorologist Jesse Ferrell, the decision to study transmission on those dates was critical because that time period was before China intervened on Jan. 24 to stop the spread of the virus. Analyzing that timeframe allowed researchers to observe the natural spread of the virus before public health measures, which have since helped reduce the spread drastically in China, where implemented.

That step was one of several sound methods taken by authors Jingyuan Wang, Kai Feng, Weifeng Lv of Beihang University, and Ke Tang from Tsinghua University, according to Ferrell. He also commended the authors’ accounting for GDP per capita, which normalized the differences in health care facilities, and the normalizations for population density.

The paper showed that the direct impacts of air temperatures and humidity levels could be seen plainly in the severity of outbreaks during the earlier stages of the virus spread.

“In the early dates of the outbreaks, countries with relatively lower air temperature and lower humidity (e.g. Korea, Japan and Iran) saw severe outbreaks than warmer and more humid countries (e.g. Singapore, Malaysia and Thailand) do," the researchers wrote.

"Considering the natural log of the average number of cases per day from February 8 to 29 as a rough measure of the severity of the COVID-19 outbreaks," the researchers continued, "we show that the severity is negatively related to temperature and relative humidity using 14 countries with more than 20 new cases during this period."

Using the value R to represent the transmission, the paper also found that cities in northern China, where temperatures and relative humidity were lower, had larger transmission values than cities along the country's southeast coast. 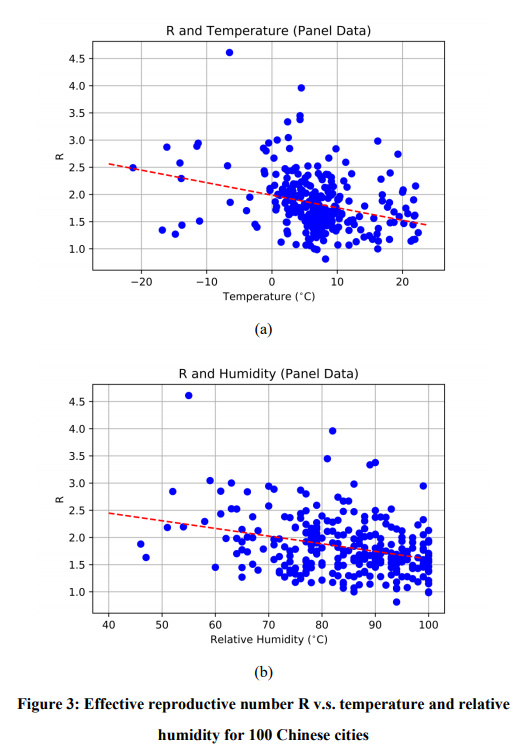 The scientists' findings align with what some experts have suspected about weather's impact, including Hong Kong University pathology professor John Nicholls, who told AccuWeather that research on a lab-grown copy of SARS-CoV-2, "in cold environments, there is longer virus survival than warm ones."

Other infectious disease experts have voiced skepticism that warmer weather will help curb the spread of COVID-19. Marc Lipsitch, a professor of epidemiology at Harvard’s T.H. Chan School of Public Health, said earlier this month that warm weather will "probably not" slow down the spread, at least not significantly.

When contacted by AccuWeather this week, Lipsitch said in an email that he had nothing to add to his earlier analysis.

In applying the paper's findings to the forecast temperatures and humidity, the authors concluded that the arrival of summer and rainy seasons in the Northern Hemisphere can "effectively reduce the transmission of COVID-19," while the risk for the continued spread of the illness will remain in some countries in the Southern Hemisphere.

The authors even added that normal summer temperatures and relative humidity in Tokyo suggest that the transmission would be significantly reduced in time for the 2020 Summer Olympics, currently scheduled to be kick off on July 24. According to their findings, by July, Tokyo's "estimated R value decreases from 1.914 to 0.992, a 48% drop!" The International Olympic Committee, even as the crisis has escalated in recent days, remained steadfast this week that the games will go on as planned this summer. 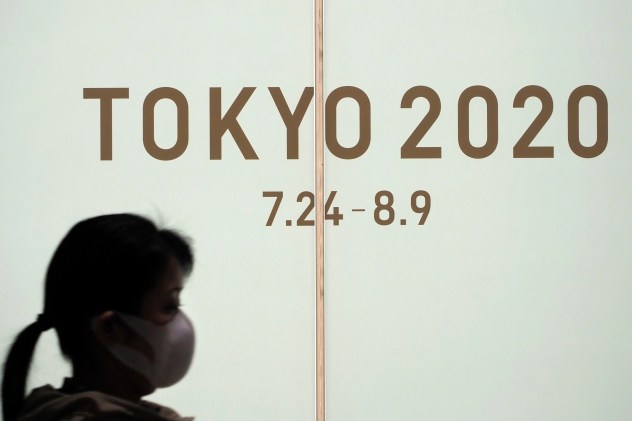 Some experts are also pointing to the increased amount of UV rays from the sun the Northern Hemisphere will be subject to this time of year as a factor that could slow the virus.

"The sun angle changes significantly from the equinox to the solstice," AccuWeather meteorologist and Astronomy blogger Dave Samuhel explained. "That means a significant additional amount of solar radiation, or insolation, reaches the ground."

UV light has been proven to kill other strains from the coronavirus family, like SARS and MERS, but there isn't research yet showing the same is true for SARS-CoV-2.

Ferrell pointed out one key weakness in the study, which is the authors used temperature and relative humidity from 2019. Typically, meteorologists will use a broader data range, such as the 30-year normals. But Ferrell said in this case, a long-range weather forecast could be even more helpful than historical data. 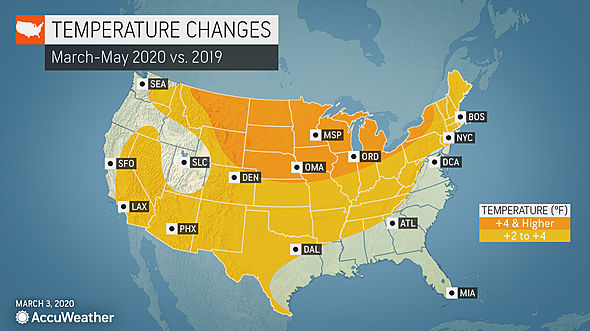 Temperatures across much of the continental U.S. from March to May will be higher in 2020, AccuWeather meteorologists predict.

Projected temperature increases over the next few months are expected to align favorably for U.S. residents if the findings of the published paper prove true. With much of the U.S. forecast to see higher-than-normal temperatures in March and April, according to AccuWeather meteorologists, there is a chance that the virus could eventually "burn itself out," as Nicholls first suggested during a private conference call in early February.

"Although it will also, of course, depend on other factors like each country's place on 'the curve' of cases and the success of their response, Ferrell said, adding that an outbreak "could also re-emerge in the fall, as past epidemics have."

"The good news would seem to be: At least the weather is not working against us for a few months," Ferrell said.

If such temperature increases do occur, the paper's R value findings suggest that the U.S. will see a far lower transmission rate by the summer than the country is currently seeing in March. Early in March, the number of U.S. confirmed cases tallied in the dozens. By March 18, thanks to a notable increase in testing, that number had soared past 7,300. 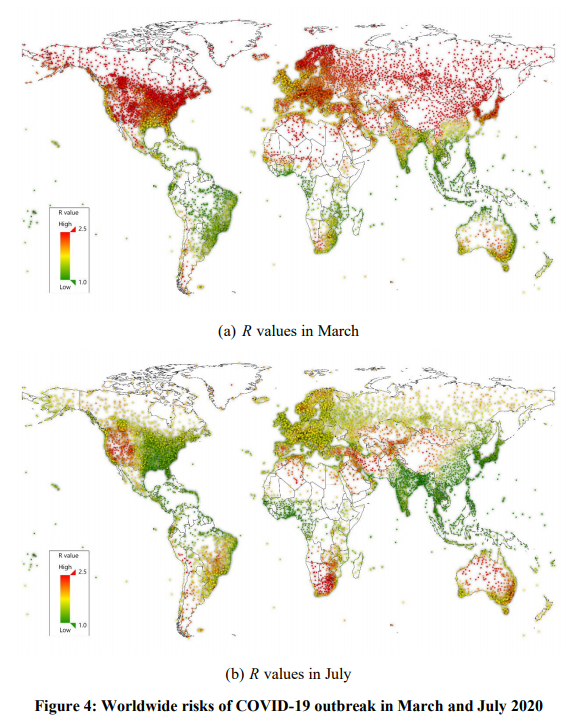 However, as the papers' authors, Nicholls, Ferrell, and a host of other health experts have noted, there are many factors that could influence the transmission of COVID-19, including public health policies, like social distancing, that have been enforced and the population's ability to carry those methods out. Even the virus' propensity for surviving on surfaces could be a complicating factor.

While the weather may not be the ultimate factor in how devastating the pandemic becomes, researchers may now have a new tool to use in piecing together the puzzle.

"The transmission of viruses can be affected by a number of factors, including climate conditions (such as temperature and humidity), population density and medical care quality," the researchers said. "Therefore, understanding the relationship between weather and the transmission of COVID-19 is key to forecast the intensity and end time of this epidemic." How an astrophotographer captures incredible space images from his bac...