Some experts skeptical that warm weather will slow COVID-19 outbreak

As the coronavirus pandemic affects almost every aspect of daily life, many wonder if warm weather will inhibit the spread of the virus. AccuWeather founder and CEO Dr. Joel Myers shares his insights.

As health officials around the world continue to learn more about the ongoing spread of COVID-19, one of the most pressing questions centers on the role of warmer weather, and whether or not it can subdue the spread of the outbreak, which the World Health Organization (WHO) declared a pandemic on Wednesday.

Many, including President Donald Trump, have posited that warmer weather will eventually get the best of the new coronavirus. However, some infectious disease experts, including a top epidemiologist at Harvard University and the director of the Center for Infectious Disease Research and Policy in Minneapolis, are cautioning that unlike cases of seasonal flu, which tend to decline in the spring and summer months, COVID-19, and SARS-CoV-2, the virus that causes it, will not behave in the same manner. 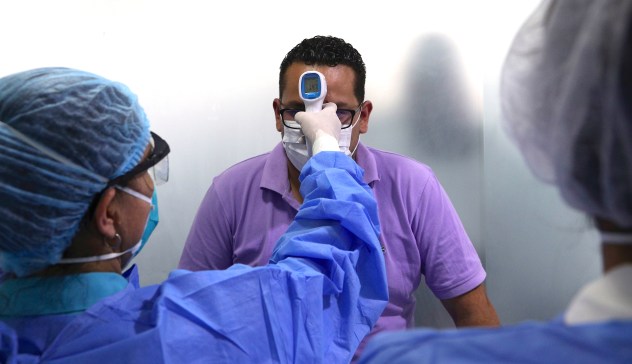 A man wearing a mask as a precautionary measure against the spread of the new coronavirus gets his temperature taken at a small medical center that specializes in respiratory illnesses in Lima, Peru, Wednesday, March 11, 2020. (AP Photo/Martin Mejia)

Marc Lipsitch, professor of epidemiology at Harvard’s T.H. Chan School of Public Health, recently posted an analysis in which he said that warmer weather will "probably not" significantly suppress the spread of the disease.

Michael Osterholm, the director of Infectious Disease Research and Policy (CIDRAP) and Regents Professor, the McKnight Presidential Endowed Chair in Public Health, cautioned that the world is only in the beginning stages of the outbreak, and said, "This is a coronavirus winter."

Lipsitch examined four factors regarding seasonality and transmission of the virus, officially known as SARS-CoV-2, in temperate regions.

One of the factors Lipsitch looked at is the environment, which includes the role of humidity and its ability to slow the spread of COVID-19. Humidity is a known factor in the spread of other respiratory illnesses like influenza, which thrives in cold, dry air.

“To my knowledge [there] are no specific studies of the role of humidity for coronaviruses or other respiratory viruses besides flu,” Lipsitch wrote.

Lipsitch and a group of fellow researchers published a paper with new medical research in mid-February that has not yet been peer-reviewed, but looked at the effect humidity has on the virus.

In the paper, the researchers suggested transmission is possible in many different climates and they cited Singapore as an apt example. Singapore sits near the equator and as of March 11 had reported more than 170 confirmed cases.

"This is one piece of evidence, but as my colleague Dr. Eli Perencevich has pointed out, there are many differences between Singapore in February and a temperate zone in summer -- different day length, ultraviolet radiation, and other factors that may be important for coronavirus – we simply don’t know," Lipsitch wrote in his analysis.

The authors of the paper concluded that "weather alone (i.e., increase of temperature and humidity as spring and summer months arrive
in the North Hemisphere) will not necessarily lead to declines in case counts without the implementation of extensive public health interventions." They cautioned that further research on weather's impact on the virus is necessary.

Lipsitch declined to comment further when reached by AccuWeather.

Human behavior is another factor researchers have addressed. During the winter, people spend more time indoors with less ventilation and personal space than when they venture outdoors in the spring and summer. Lipsitch points out that schools “are a site of much infectious disease transmission.” The 2009 flu pandemic declined in the summer but ramped back up in September, he noted.

The impact of school years or college semesters on SARS-CoV-2 is uncertain at this point.

Few children have been diagnosed with COVID-19, Lipsitch noted. "This may mean they do not get easily infected and don’t do much transmitting," he wrote. "Or it may mean only that they don’t get severe symptoms when they are infected, and transmit nonetheless. Or something in between. Understanding this is key if we want to know whether school closures can help control COVID-19 spread, as well as to anticipate how much summer vacation may help reduce spread."

Lipsitch also debunked what he characterized as several myths surrounding other forms of coronavirus, including the notion that the 2003 SARS outbreak was contained thanks to warmer weather.

“[SARS] was killed by extremely intense public health interventions in mainland Chinese cities, Hong Kong, Vietnam, Thailand, Canada and elsewhere,” Lipsitch wrote. “These involved isolating cases, quarantining their contacts, a measure of 'social distancing,' and other intensive efforts. These worked well for SARS because those who were most infectious were also quite ill in a distinctive way — the sick cases were the transmitters, so isolating the sick curbed transmission.”

Another myth Lipsitch addressed was that since “common cold” coronaviruses are seasonal and decline in the summer, the same will be true for SARS-CoV-2. According to Lipsitch, viruses that are newly introduced to the populations behave differently from those that have been around the general public for a long time.

Since the outbreak first emerged in Wuhan, Hubei Province, China, in late 2019, more than 120,000 cases have been reported worldwide and the global death toll has surpassed 4,300.

Osterholm compared the effort to stop the spread of the COVID-19 outbreak to “trying to stop the wind.”

Osterholm sat down with Joe Rogan, host of The Joe Rogan Experience podcast this week, and, similar to Lipsitch, said that stopping the spread of the virus will likely have more to do with good public health policies and practices and less to do with to warmer weather. He also cited the behavior of SARS as an example that weather won't be a factor in reducing the threat.

During the SARS outbreak, many people didn’t become really infectious until day five or six of their illness and by then many victims had succumbed to the sickness, Osterholm told Rogan.

“Then public health officials were able to identify cases and patients' contacts quickly and, so, if they had symptoms, brought them in, put them in these isolation rooms so they wouldn’t infect anybody else, and it took until June to bring that under control," Osterholm said. "That had nothing to do with the seasons,” he added.

Middle East Respiratory Syndrome (MERS), another type of coronavirus, is spread from animals to people in temperatures as high as 110 degrees Fahrenheit in the Arabian Peninsula, Osterholm pointed out as a reason to not bank on warmer weather suppressing the virus.

“There’s no evidence it’s seasonal there,” he said.

The recent analysis from Lipsitch and Osterholm contradicts earlier remarks made in private by another expert, Hong Kong University pathology professor John Nicholls. In early February Nicholls delivered his analysis in a private call with analysts at a Hong Kong investment firm. At the time, Nicholls told the analysts he expected the threat to wind down by around May and cited 86 degrees Fahrenheit as the temperature at which the virus would "burn itself out."

Those remarks leaked on social media and, when contacted by AccuWeather, Nicholls did not deny having made them, but said the comments were meant to be private. Days later, he still didn't back off the remarks, but told AccuWeather he didn't want to contradict a CDC official who said she was hopeful that the threat from the new coronavirus would go down "as the weather warms up."

Osterholm struck a sobering tone when discussing health and government officials' response to the spread of COVID-19 as the outbreak has intensified in the U.S.

“I keep telling people we’re handling this like it’s a corona[virus] blizzard – ya know, two or three days [of disruption] and we’re back to normal,” Osterholm said. “This is a coronavirus winter," he said, adding that the outbreak could last "six months or more."

Osterholm also likened the messaging from health and government officials to the public to how meteorologists conduct hurricane forecasting.

“Every time I hear people say the risk is low right now, it reminds me of what would happen if there was this huge low-pressure system” off the Gulf Coast, Osterhold told Rogan. “And there was 90-degree water between that system and the beach, and there was no wind shear in the Northern Hemisphere that’s likely going to knock it off. But we tell the people standing on the beach that we have low risk of anything when we know that five days from now, it’s coming.”

“We’re going to be in some hurt for the next few months and we have got to get better prepared.” he said. “This is going to be challenging, but we are going to get through it.”