A large waterspout was seen churning off the coast of Naxos, Greece, on Oct. 21, as storms swept through the region.

The wait is over. AccuWeather’s annual winter forecast for Europe is here, and the upcoming season is expected to be much different than last winter in more ways than one.

Countries all across Europe are experiencing a new wave of the coronavirus, prompting new restrictions that will go into effect just weeks away from the start of winter. Skiers, in particular, are keeping a close eye on travel restrictions and new rules at resorts as they look to enjoy some time on the slopes with the prospects of snow perhaps being a second thought.

Far away from the snow-covered mountains, restaurant owners from Moscow to Madrid are hoping to keep outdoor seating areas open as long as the weather permits. 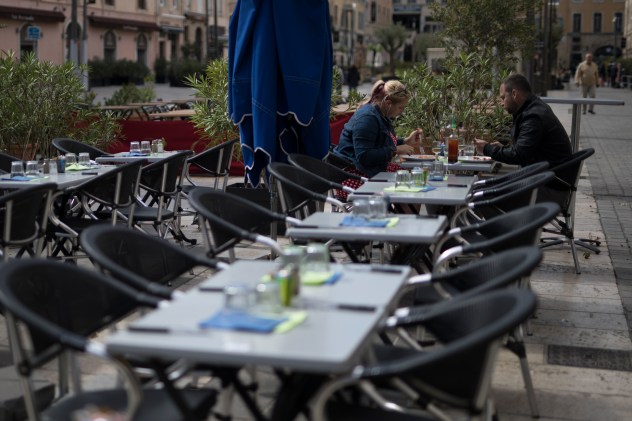 As the seasons transition from autumn to winter, the primary storm track across Europe is forecast to shift south with many storms moving over southern Europe and the Mediterranean Sea.

“I think compared to what we’ve seen other years in Spain, Portugal and southern France, it’s going to be a lot stormier,” Reppert said.

Some of the major cities in Europe that could experience stormier conditions this winter because of this pattern include Lisbon, Portugal; Madrid and Barcelona in Spain; and Nice, France; along with Rome, Athens and Bucharest, Romania.

“Having a southern storm track at times throughout the winter months will be beneficial for Spain and Portugal as the winter months make up their wet season and help to replenish the reservoirs for the rest of the year,” Roys said.

"This rain over Spain and Portugal should help winter crops such as olives," Reppert added. The growing season for some varieties lasts through March.

However, the active storm track will endanger lives and property across the region.

“When you get the southern Europe track, it’s not necessarily fast-moving storms," that typically develop, Roys said. The storms that develop under this pattern, he added, can "take their sweet old time to move from Spain to Italy to the Balkans to Turkey or to Ukraine,” and they can be more damaging. "It isn’t the fast-moves that we typically see to the north.”

The slow progression of these storms will result in a heightened risk of flooding, especially in northern Italy and into the western Balkans.

Flooding already became an issue for part of southern Europe during autumn when Storm Alex tracked over the region, causing major flooding and mudslides. At least two people died due to the severe weather conditions, according to CNN. 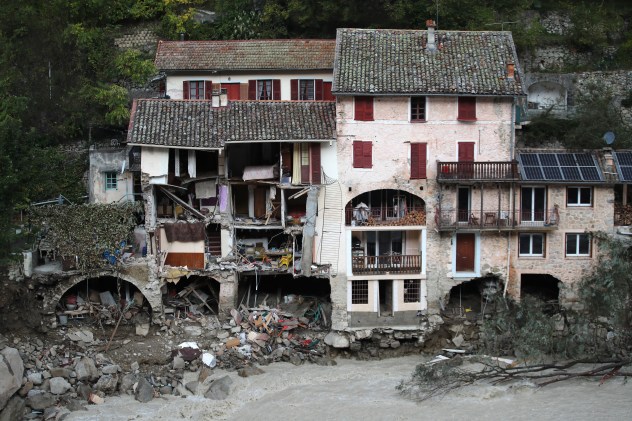 Despite the projection of a stormy winter for southern Europe, it may not translate to good news for snow lovers across the region.

“The one thing that I will say is that the Alps might be hurting for snow this year,” Roys said. “Especially on the Italian side of the Alps.”

The winter does have the chance to start off on the snowy side in December, but the prospects for snow are anticipated to diminish in January and February.

A few ski resorts across the region have already opened slopes due to autumn snow, but the poor conditions in the forecast for the middle of this winter could hurt resorts that are already dealing with complications surrounding the coronavirus pandemic.

International travel will be complicated this year with some countries requiring an extended quarantine upon arrival before heading out to the slopes, PlanetSKI, a website that covers skiing and winter life in the Alps, reported. Each individual ski resort may also have different guidelines. This could have financial consequences for resorts in the Alps that typically see visitors flocking from all around the world to hit the slopes. 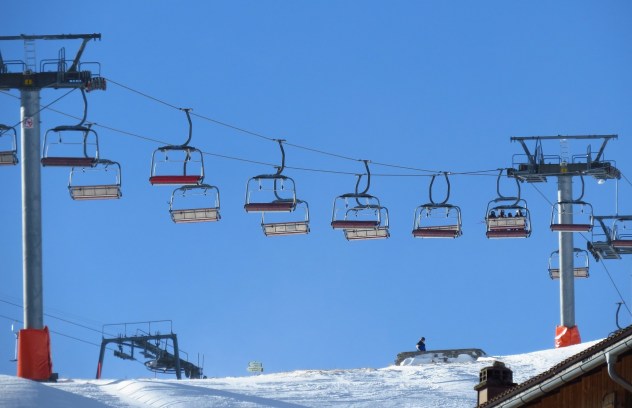 The predominately southern storm track across Europe this winter will also increase the number of Bora wind events in Croatia, that could ultimately be to the benefit of ski resorts in Italy outside of the Alps.

“These Bora winds are known to reach hurricane force and are winds that will come off the Dinaric Alps into eastern Italy,” Roys said. Precipitation could be enhanced in eastern Italy due to air rising over the mountains and coming off the sea.

While the Italian Alps may end up with below-normal snowfall, Bora winds could cause snow to pile up in the mountains of Italy near the Adriatic Sea. This includes some ski resorts such as Monte Piselli, Bolognola and Risalita sciistica Carpegna.

Signs of winter have already arrived in parts of Europe with the second named windstorm of the season hitting in mid-October. However, the jump start on the windstorm season is not indicative of what’s to come.

Last winter, the region saw an unusually high number of windstorms, which pummeled the Atlantic coasts with hard-hitting waves and hurricane-force winds. However, a repeat is not in the cards for this winter. 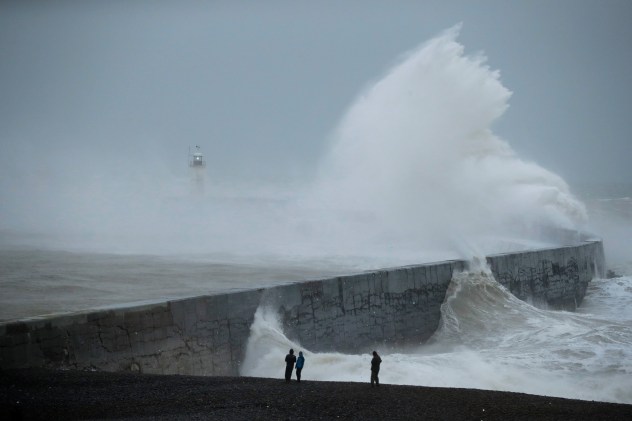 Waves crash over the harbour wall by a lighthouse as Storm Ciara hits Newhaven, on the south coast of England, Sunday, Feb. 9, 2020. (AP Photo/Matt Dunham)

“Even though it’s already had a semihot start with several named storms, we are looking at a less active year than last year,” Roys said.

January through early February will be the most active time of the winter in terms of windstorms, but storms during other parts of the winter cannot be completely ruled out. 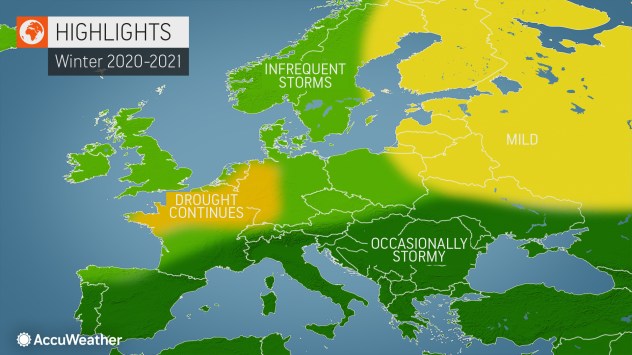 Infrequent storms across northern Europe will lead to some dryness concerns heading into the winter months.

“Northern France into Germany, especially western Germany, have been experiencing drought, so the dry conditions we are expecting this winter will not help at all. In terms of replenishing reservoirs, getting rivers back to normal levels, this is the time to do that, and that’s not going to happen,” Roys said.

Farmers across the region that grow winter wheat may encounter issues later in the season due to the dryness.

Even though drought conditions may become worse, the drier-than-normal conditions could benefit restaurants and outdoor markets across the region that are hoping to utilize outdoor areas well into the winter to keep their businesses afloat during the pandemic.

"The Christmas Markets in Germany could be quite busy with the lack of storminess and some mild weather for this time of year," Reppert said, referring to the extravagant outdoor events that begin popping up in late November across the country.

Some patrons may brave the cold to shop or to enjoy a drink to help local businesses, but any windstorm that might develop could potentially shut down outdoor areas for several days.

Last winter was one of the warmest on record for eastern Europe with very few Arctic intrusions and snowstorms to speak of. Moscow in particular averaged 8 C (14.4 F) above normal from December through February.

This winter is not anticipated to be the same as last year, but it won’t be too far off either.

“In Moscow, it’s going to be closer to normal,” Reppert said. “Even if it’s an above-normal year, it’s going to feel a lot different than it did last year.”

The same can be said for much of the region, including Finland, Estonia, Latvia, Lithuania, Belarus, and into parts of Ukraine.

The season as a whole may average slightly higher-than-normal temperatures, but one big difference from last year is that the region will see periodic cold spells, and along with the cold air intrusions, opportunities for snow are expected to arrive.

“Even if we are calling for a warmer winter across many locations there, [there will be an] increased threat for winter storms,” Roys said.

Apart from the intermittent cold snaps, the season is going to be beneficial for outdoor dining for restaurants all across the region.

“Given the mild weather that will be beneficial to the point where the portable heaters may not be needed because the temperature will end up being 10 C or 15 C (50 F to 60 F) in places like Kiev, Ukraine,” he added.

The milder weather in Finland may also be favorable for stargazers as the long winter nights will not be quite as frigid. 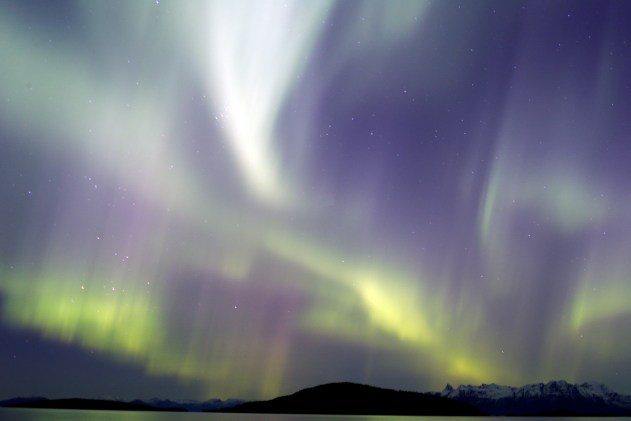 The aurora borealis, or northern lights, are seen over the Norwegian town of Harstad, Wednesday, Oct. 7, 2015. (AP Photo/Gregorio Borgia)

Solar activity will be increasing as the sun transitions from a period of low activity, known as the solar minimum, to a period of high activity, known as the solar maximum. The sun is still several years away from the height of the upcoming solar maximum, but there has already been a noticeable uptick in activity that has set off some impressive displays of the aurora borealis.

The northern lights that dance across the sky this winter could be the best seen in years across the high latitudes, with perhaps one or two chances to see the aurora in part of the British Isles and far northern Europe.