Frigid air will set the stage for a wintry storm to bring heavy snow to the mountains and passes to start the week in Washington and Oregon, and there is even the potential for some snowflakes to fall close to sea level around Seattle and Portland this week as even colder air pours in across much of the West, AccuWeather meteorologists say.

The stormy weather will follow a spell of benign weather conditions that featured areas of sunshine, mild air and light winds over the Northwest from Thanksgiving Day. Typical highs during the last several days of November range from the mid-30s F in the Washington passes to near 40 in eastern Washington and Oregon to the low 50s at sea level along the Northwest coast.

"Mild air has been very difficult to come by so far this month across the Northwest, with many interior locales averaging between 8 and 12 degrees below average through the first three weeks of November," AccuWeather Long-Range Meteorologist Brandon Buckingham said. Temperatures have averaged 3-6 degrees below normal during the first three weeks of November along the Interstate 5 corridor of Washington and Oregon. 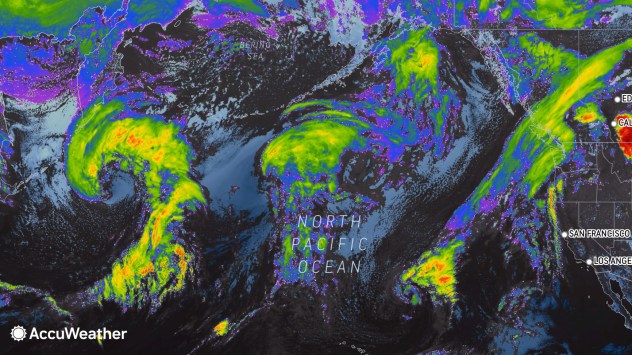 This image of the northern Pacific Ocean was captured on Friday, Nov. 25, 2022. (AccuWeather Enhanced RealVue™ satellite)

Beginning this past weekend, a stormy pattern emerged across much of the Northwest. After a cold front swung through on Friday and brought the first round of rain and snow, storm systems over the weekend brought heavier precipitation, leading to impactful snowfall in many mountain passes across Oregon and Washington.

Travel over Snoqualmie and Stevens passes became difficult by Sunday with the risk of the passes closing for a time due to rapidly accumulating snow and slippery driving conditions. Crews were still working to keep roads clear of snow and ice as unsettled weather remained in the area.

"Progressing into early this week, many locations along and west of the Colorado Front Range will feel the effects of this storm," Buckingham said. Precipitation types will range from a mixture of low elevation rain and mountain snow in northern California and the Southwest to mostly snow across the Great Basin and Rockies. 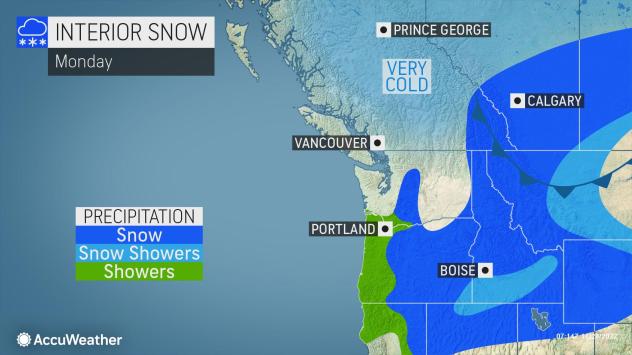 Cold Canadian air will likely be forced southward over much of the western U.S. to close out the month of November, and it will stick around into early December. Temperatures during this time will average 8-15 degrees below average, Buckingham said. During much of this week, high temperatures in Seattle will range from the mid-30s to near 40. However, temperatures may struggle to reach the freezing mark in the Emerald City on Thursday.

The combination of cold air and lingering moisture can lead to rain and wet snow showers along the I-5 corridor of Washington and northern Oregon from this upcoming Monday to Tuesday.

The second storm is forecast to drop southward along the Pacific coast from the middle to latter stages of the week.

A typical storm track in the Northwest during this time of year is usually accompanied by milder air. However, with the air being so cold and extensive, snow levels may be rather low in the Northwest. A wintry mix is possible at the onset of the storm on Wednesday even near sea level, prior to transitioning to rain. Accumulating snow cannot be ruled out over the hilltops in the I-5 corridor this far in advance, according to AccuWeather meteorologists.

It is possible that this second storm may push rain and mountain snow all the way to Southern California during early December. 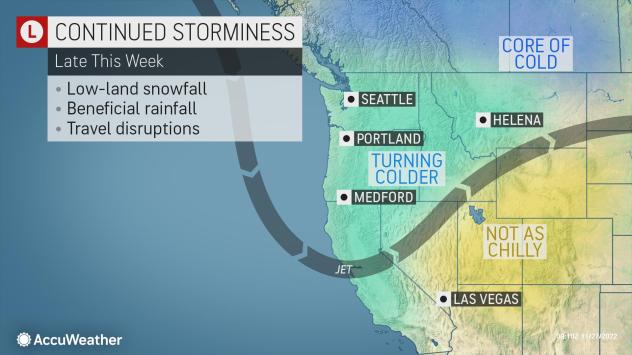 "While the persistent chill and upcoming much colder conditions may not be appreciated by residents due to the high energy demand for heating, ski resort operators in much of the West will relish in the fact that they will be able to continue to add to the snowpack amid subfreezing temperatures," Buckingham said.

AccuWeather's team of long-range meteorologists predicted a fruitful and early start to the ski season in the Cascades and Rockies when it released its winter forecast in September.