Wildfires burned millions of acres of land across the western United States over the past several months, leaving many areas at risk of flooding and mudslides during winter.

As of Nov. 6, wildfires have burned over 8.8 million acres across the United States, more than 2 million acres above normal, according to the National Interagency Fire Center.

Some of the most devastating fires scorched Northern California in early October, leaving behind large burn scars, or areas of scorched earth with little vegetation remaining.

Areas in and surrounding these burn scars will be at a higher risk for flooding over the coming months as winter storms bring heavy rain to the region. 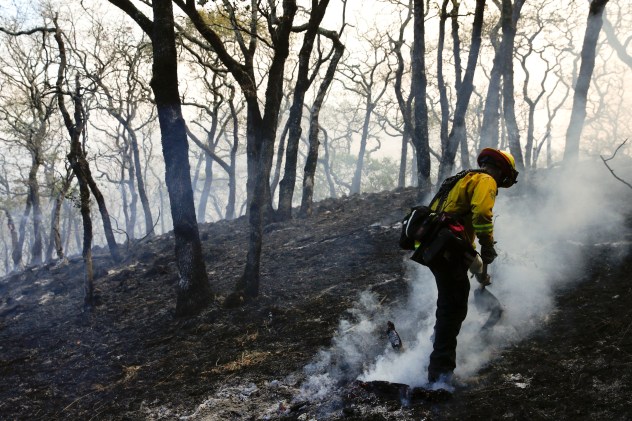 A firefighter mops up the area scorched by a wildfire Saturday, Oct. 14, 2017, in Santa Rosa, Calif. Fire crews made progress this week in their efforts to contain the massive wildfires in California wine country, but officials say strong winds are putting their work to the test. (AP Photo/Jae C. Hong)

California’s wet season runs from October through March due to the southern shift in the jet stream during the winter months. The jet stream is a fast river of air high in the atmosphere, around the altitude that jets fly, that is essentially the highway that storm systems travel on.

This shift in the jet stream causes storms to track over California, delivering much of the state's yearly dose of rain and snow in just a few months.

“Any time there has been major fires that burned large expanses of an area, heavy winter storms bring an increase in flooding, mudslides and debris flows in, and near, the burn scars,” AccuWeather Senior Meteorologist Ken Clark said.

With little vegetation remaining in the burn scars, most of the rain runs off the charred ground rather than being absorbed into the soil. As the water flows downhill, it can turn in a debris flow as it collects ash, dirt, rocks and trees in its path.

Depending on the severity of the fire, it can take years for burn scars to heal as plants grow back slowly, resulting in a heightened risk of flooding for multiple wet seasons. 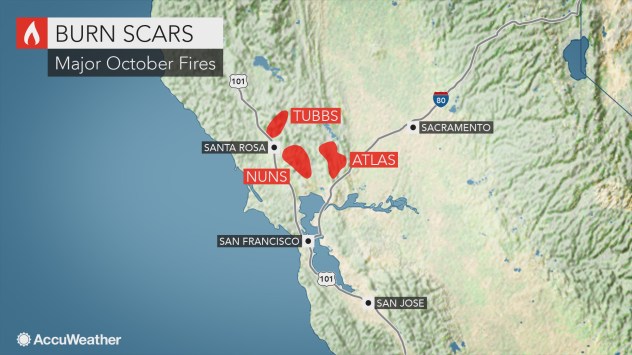 Santa Rosa, Sanoma, Kenwood, Calistoga and Napa are among the California communities that have been devastated by wildfires in 2017, and these areas will be at greatest risk for flooding during the upcoming winter storms.

The Tubbs, Nuns and Atlas fires burned over 140,000 acres around these areas, destroying thousands of structures and leading to dozens of fatalities. In some cases, the fires consumed entire neighborhoods.

“The big thing is people that live near these burn scars will have to be more prepared than usual for potential flooding, mudslides and debris flows,” Clark said.

The period to watch for an uptick in winter storms will be from mid-November into early December, according to AccuWeather Lead Long-Range Meteorologist Paul Pastelok.

Overall, this winter is not expected to be as wet as last winter for California due to the development of La Niña, or cool waters in the equatorial Pacific Ocean that influence global weather patterns.

"A weak La Niña is setting in and typically the wettest and snowiest path is farther north into the Northwest and southwestern Canada," Pastelok said.

When storms do track farther south into California, the heaviest rain will focus on northern and central parts of the state with heavy snow over the mountains.

Preparing for the costliest weather disaster in the US: How to stay safe before, during and after a flood
Evacuation checklist: How to get your family out safely in the face of an imminent disaster
Powerful storm to slam northwestern US with rain, wind and mountain snow

Not only will people living across the region need to be on alert for the flooding these storms bring, but also those traveling through the area.

Flooding associated with the major burn scars around Napa and Santa Rosa, California, may impact portions of Routes 12, 101, 121 and 128, as well as many other smaller roads that traverse through the burn scars.

People that live in flood-prone areas should prepare before the rain starts to fall so they can act fast in the event of a flash flood.

A key way to prepare for a flood is to put together an emergency kit in advance in case evacuations are necessary. These kits should have at least one gallon of water per person for at least a couple of days, money, important documents, a first aid kit, a weather radio and a week's supply of medication.

If a flash flood warning is issued, it is important to seek higher ground immediately and to heed all evacuations issued by officials.

At least 6 dead in Texas as ice slicks roads