The photos reveal crumbled structures and old roads of a mid-19th century town that had been underwater for decades — and the ruins tell a tale of settlers that struggled across the vast prairies of the United States in search of a new way of life in the West. 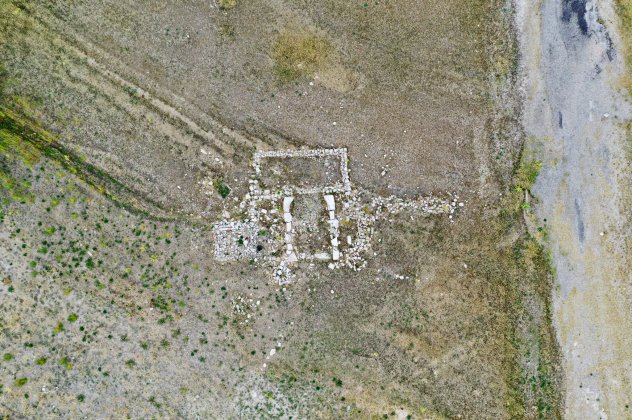 Ghostly images of a forgotten Utah town that had surfaced from underwater after a dry summer and increasing drought have brought about several interesting discoveries in areas usually covered by water.

Water at the Rockport Reservoir, located about 45 miles east of Salt Lake City, is about a quarter of its total capacity, and the foundations of an old town that once existed there have emerged. Eerie images posted to Twitter by drone test pilot Devon Dewey show old roads and crumbling rock structures that were once the pinnacle of hope for hard-working pioneers struggling to survive in the isolated landscape.

The Utah Department of Natural Resources (DNR) says water levels at many Utah state parks are experiencing extreme lows and lists Rockport as currently at 26% capacity. Park officials closed the main boat ramp this summer because of the low levels.

"Rockport Reservoir is so low right now that many of the foundations of the old town are now visible. The town was flooded back in the 1950s to create the reservoir," Dewey said.

The reservoir was created by flooding a small town called Rockport. The town's history is a fascinating look at life and culture on the American frontier in the mid-19th century. The first European settlers came to the area in 1860 and named their settlement Crandall before renaming it Enoch City the next year. According to the DNR, freezing winter temperatures and deep snow made life difficult, but the roughly 200 pioneers who lived there were determined to stay.

When the outbreak of the Black Hawk War in 1866 caused widespread fear of Ute attacks, the colony was completely evacuated to nearby Wanship. According to scholars, the Ute Native Americans were one of the poorest tribes in America. As Mormon settlers poured into the region they came into conflict with the Utes who were already struggling to survive on the rugged land. As tensions between settlers and Native Americans increased, residents built an 8-foot-tall, 2-foot-thick rock wall around the entire settlement for defense and changed the town's name to Rock Fort. After the war, the wall was taken down, and the town was renamed to Rockport.

For many years, the population of Rockport remained over 100, with the most people, 147, recorded living there in 1900. Dozens of families still lived there in the 1950s and protested when the government decided to construct the Wanship Dam and purchased the entire valley. The lake that the dam created, Rockport Reservoir, flooded over the entire town except for its little cemetery which sits on a ridge above the lake.

By 1957, everything was submerged by the 156-foot-tall, 2,010-foot-wide dam. The Bureau of Reclamation still owns the reservoir but contracted Utah State Parks to manage it, leading to the creation of Rockport State Park in 1966.

"It was really interesting to be standing at an overlook for the reservoir and to see faint traces of foundations of old homes and a road all below where the water would normally be," Dewey said to KSL.com.

"The whole area is pretty flat and uniform, so even though the foundations are old and mostly gone, you can still see them clearly if you know where to look," he said. "Using a drone to get a higher perspective helped to see where structures once stood over 70 years ago."

The ruins stand as crumbling, scattered reminders of the hardworking men, women and children who struggled across the vast prairies of the United States in search of a new way of life in the West -- people who waged war with the often unforgiving elements to raise their families in the wilds of the brand new state of Utah nearly 150 years ago.

According to state historians, before flooding the town, the government removed some of the buildings to preserve them for history. One of them, the Rockport School House, was moved to 'Pioneer Village' at nearby Lagoon Amusement Park. As a local blogger notes with a photo of the relocated schoolhouse, "meant to be a 'living museum,' Pioneer Village is intended to make the history of Utah come alive."