The Climate Science Special Report (CSSR) was publicly released on Nov. 3 by the U.S. Global Change Research Program (USGCRP). The report is a stand-alone report on the science relating to climate change and its physical impacts, with a focus on the United States.

The report was unveiled by 13 federal agencies and was approved for release by the White House.

The report stated that global average temperatures have increased by about 1.8 degrees Fahrenheit over the last 115 years, making this period the warmest in the history of modern civilization. Human activities are the dominant cause of this global temperature rise, the report concluded, adding that there is no convincing alternative explanation supported by the observational evidence.

The report addressed the role of human-caused climate change in extreme hurricanes, which has been a controversial topic due to this season's destructive storms.

"Human activities have contributed substantially to observed ocean–atmosphere variability in the Atlantic Ocean, and these changes have contributed to the observed upward trend in North Atlantic hurricane activity since the 1970s," the report reads, noting that there is medium confidence around this finding. 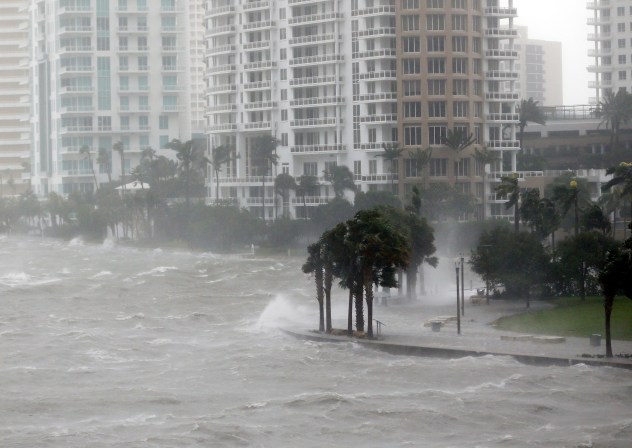 Waves crash over a seawall at the mouth of the Miami River from Biscayne Bay, Fla., as Hurricane Irma passes by, Sunday, Sept. 10, 2017, in Miami. (AP Photo/Wilfredo Lee)

There is disagreement about the relative magnitude of human influences in North Atlantic hurricane activity. However, there is broad agreement that human factors have had an impact on the observed oceanic and atmospheric variability in the North Atlantic, the report stated.

The report expects there to be continued active research on the topic in the future.

There are numerous physical processes that explain the linkages between climate change and hurricanes, according to a Scientific American article written by climate experts.

"The seemingly modest 1 foot of sea level rise off the New York City and New Jersey coast made a Sandy-like storm surge of 14 feet far more likely, and led to 25 additional square miles of flooding and several billion extra dollars of damage," the article reads.

The science is also fairly conclusive on the increasing intensity of storms, with roughly eight meters per second increase in wind speed per degree Celsius of warming, according to the article.

Unusually warm sea-surface temperatures contributed to the flooding power of both Hurricane Harvey in 2017 and Hurricane Irene in 2011, according to the article.

Both the government report and article agreed that continued research is necessary in understanding the impacts of the changing climate on hurricanes.