While Karen will change course over the Atlantic in the coming days, Lorenzo will remain a powerful hurricane well over the open Atlantic.

In addition to Hurricane Lorenzo, AccuWeather meteorologists are monitoring a broad area from Central America to southeastern Mexico and adjacent waters for signs of tropical trouble.

"While there are no immediate threats in this area, cluster of showers and thunderstorms can produce areas of heavy rain and gusty winds in this region," according to AccuWeather Hurricane Expert Dan Kottlowski.

"Residents and visitors in these areas should be prepared for incidents of flash flooding and mudslides," he added.

The western Caribbean to the western Gulf of Mexico are on the watch list for potential gradual tropical development over the next couple of weeks.

"A large counterclockwise wind pattern is beginning develop over Central America and may last for a couple of weeks," Kottlowski said.

A broad circulation such as this is referred to as a gyre by meteorologists, and such a pattern could create a conducive environment for additional tropical systems to form. 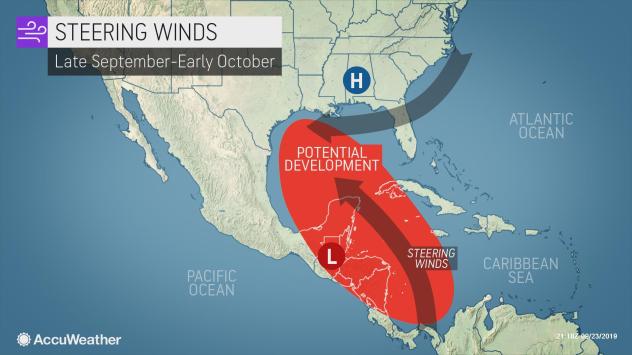 "This gyre can sometimes help to spin up one or multiple tropical depressions or storms either in the East Pacific, western Caribbean or western Gulf of Mexico," Kottlowski said.

While proximity to land with any feature that spins up would likely not last very long or get strong very quickly, the closeness to land may give little advance warning of deteriorating weather and sea conditions.

A general uptick in showers and thunderstorms is expected to continue over Central America and central, eastern and southern Mexico in the coming days as the gyre and smaller disturbances materialize.

The gyre, when combined with the circulation around high pressure over the southeastern U.S., can also pump moisture into South Texas in the coming days.

Depending on exactly where the plume of moisture sets up, the pattern could evolve from beneficial rain in some areas to too much rain and flooding in others, even in lieu of any tropical depression or storm.

Meanwhile, Karen, south of Bermuda, was downgraded to a tropical depression on Friday and is forecast to break up prior to posing any threat to the Bahamas, Cuba or Florida.