A deep-water marine archeologist described it as his “all-time favorite shipwreck” that has become “a window of the past,” and the items up for bid offer insights into a largely forgotten moment in American history. 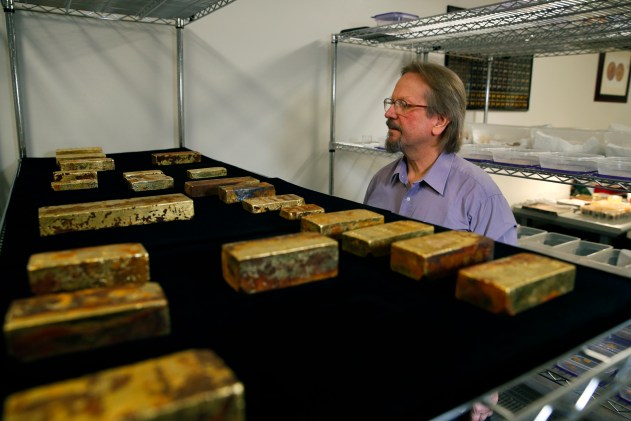 Chief scientist Bob Evans looks at gold bars recovered from the S.S. Central America steamship that went down in a hurricane in 1857 in a laboratory on Jan. 23, 2018, in Santa Ana, California. Riches entombed in the wreckage of the pre-Civil War steamship for more than a century will begin to hit the auction block for the first time Dec. 3, 2022, when more than 300 Gold Rush-era artifacts are offered for public sale in Reno, Nevada. (AP Photo/Jae C. Hong, File)

Back in 1857, well before the National Hurricane Center was founded, a ship with tons of gold sank off the coast of South Carolina. Hundreds of years after its recovery, the treasured items are getting auctioned off at their highest historical, and economic, value to date.

The S.S. Central America, also known as the “Ship of Gold,” sank on Sept. 12, 1857, after it encountered Hurricane Two of the 1857 Atlantic hurricane season on its journey from Panama to New York City.

Most of the 578 passengers aboard had traveled from San Francisco on another ship and taken a train across the Isthmus of Panama to get on the S.S. Central America for their final destination.

The mix of San Francisco’s gold-field workers to high-society members, however, was accompanied by tons of California Gold Rush coins, ingots and gold dust from the Northern California area, CBS News reported earlier this year.

Only 153 people were rescued from the shipwreck, while 425 lives were lost. Their possessions, many of which were sealed in safes and passenger trunks, remained under the Atlantic Ocean for more than a century. Last August was the first time these remarkable findings were exhibited by Holabird Western Americana Collections in Reno, Nevada, with the intention of auctioning them later this year. 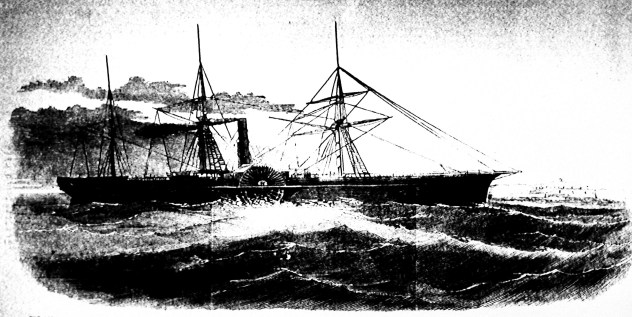 FILE - This undated drawing made available by the Library of Congress shows the U.S. Mail ship S.S. Central America, which sank after sailing into a hurricane in September 1857 in one of the worst maritime disasters in American history. Riches entombed in the wreckage of the pre-Civil War steamship for more than a century will begin to hit the auction block for the first time Dec. 3, 2022, when more than 300 Gold Rush-era artifacts are offered for public sale in Reno, Nev. (Library of Congress via AP, File)

Saturday, Dec. 3, is the day LiveAuctioneers.com will begin the live bidding for the “SS Central America Artifacts Auction.” Starting at 1 p.m. EST, the items might get a new home.

"This was a largely forgotten moment in American history because a few short years after that, the Civil War broke out,” Bob Evans, a scientist who was on each of the recovery missions, told CBS News in 2018.

Some of the most extraordinary artifacts auctioned include the lid to the oldest known Wells Fargo treasure shipping box, a daguerreotype metal plate photograph of an unidentified young woman who has been nicknamed “Mona Lisa of the Deep,” and a pair of men’s work pants with a five-button fly that suggests they could have been part of the early Levi Strauss business. 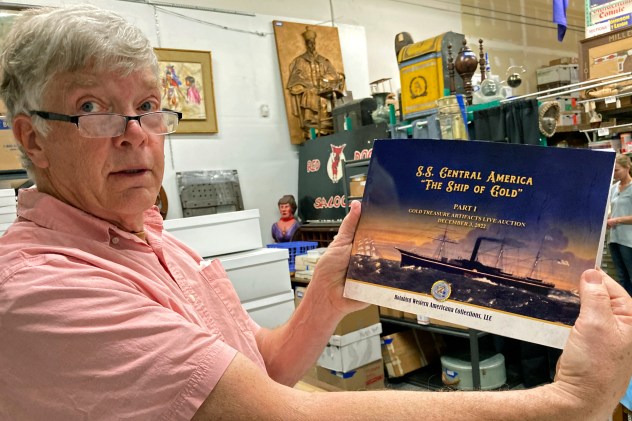 Fred Holabird, president of Holabird Western Americana Collections, poses with a catalog of Gold Rush-era collectibles recovered from the 1857 shipwreck of the S.S. Central America in a storage room at his office in Reno, Nev., on Friday, Nov. 25, 2022. Items from the shipwreck will be offered for public sale at the first of two public auctions on Dec. 3 in Reno. (AP Photo/Scott Sonner)

These are the first items to be auctioned from the ship’s treasure, but tens of millions of dollars worth of gold have been sold since its rescue, The Associated Press reported.

Fred Holabird, president of Holabird Western Americana Collections in Reno, said the ship’s purser keys to the “Ship’s Locker,” now known as the “Gold Room,” are also part of the auction. Holabird said they believe these were the only access to the room with the gold treasure cargo.

Along with many other items such as luggage tags, clothing and smaller gold-containing items, bidders could be taking home a key piece of history. Deep-water marine archeologist Neil Dobsen told the AP the S.S. Central America was his “all-time favorite shipwreck” as it has become “a window of the past.”