Russian police say a man was cleaning ice from his windshield in Vladivostok amid ice storms that left 150,000 people without water when a block came crashing down from the side of a building.

A strengthening storm system in the Ohio Valley will spread a chilly rain and accumulating snow northeastward through Monday as it moves through the Northeast and into Atlantic Canada.

Rain slowly spread across the Ohio Valley Saturday afternoon as the budding storm system began to take shape. As the storm continued to strengthen later Saturday, precipitation continued to expand northeastward, meeting colder air in place across the Great Lakes and interior Northeast. Precipitation will continue moving through the Northeast, New England and southeastern Canada into Monday.

"As the rain advanced northeastward and met colder air in place across the region, it changed over to any icy mix or all snow for some first thing Sunday morning," explained AccuWeather Meteorologist Niki LoBiondo.

A slippery mix of freezing rain and drizzle mixed with some sleet and snowflakes developed first thing Sunday morning from northeastern Ohio across the northern tier of Pennsylvania and southern tier of New York.

Wet weather to take aim at Northwest in days leading up to Thanksgiving How you can help those providing aid in Central America following Iota and Eta Snow to snarl Thanksgiving preparations in Rockies, Midwest Severe storms to target parts of South

By Sunday afternoon, higher terrain areas farther east, such and the Catskills, Adirondacks, Green and White Mountains began to get in the snow and icy mix as well.

Enough milder air is expected to arrive to change any icy mix over to plain rain for a time for most by Monday morning, although it still will be a very chilly rain.

For some, wintry precipitation may last for the entire storm, never changing to plain rain, leaving a fresh accumulation of snow.

LoBiondo explained that warm enough air will never arrive in many areas to the north and west of the storm track, keeping the precipitation type as all snow. 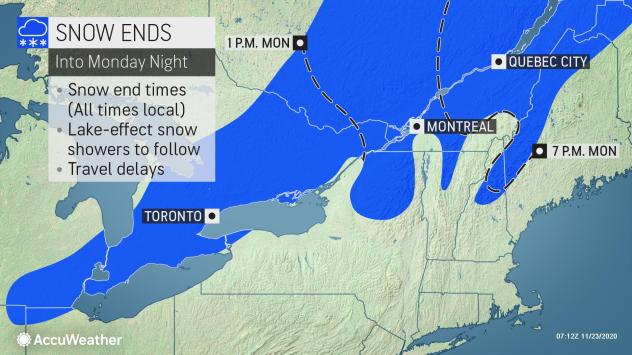 Snow was already starting to accumulate by dawn Sunday morning in parts of the Great Lakes, from southeast Michigan into southern Ontario. 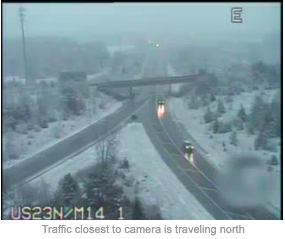 Slippery roads continued to be a concern around Detroit Sunday. By Sunday afternoon, accumulating snow was quickly shifting northeast, blanketing Toronto and making its way up the St. Lawrence River Valley toward Montreal and Quebec City.

Poor travelling conditions expected all day long as snow and rain fall. Please travel according to conditions, slow down and stay home whenever possible. Learn more about snow at https://t.co/jLqYFkIjOc pic.twitter.com/iyoSyFTNsS

Snow could become heavy for a time in a narrow stripe from parts of southern Ontario across southern Quebec. 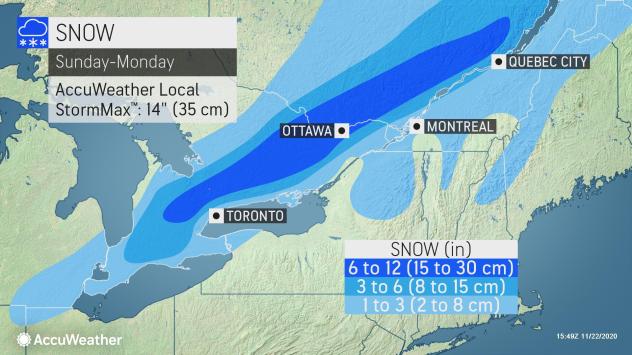 "As the storm continues to strengthen, a narrow band of heavier snow is expected to develop north and west of Lake Ontario and the St. Lawrence Valley," LoBiondo said.

The heaviest snow totals are expected to focus on southern Quebec, just northwest of the St. Lawrence Valley, where an AccuWeather Local StormMax™ of 14 inches (35 cm) is expected.

The higher terrain of northern New England will also receive accumulating snow. For much of the region, the rain that fell Sunday night will change to back to snow Monday morning, with 1-3 inches of fresh snow in the mountains. For some of the highest peaks in the Adirondacks and Green and White mountains, it may stay cold enough for all snow through the storm, with several inches of accumulation likely.

For the rest of the Northeast, it will be a cold, raw rain putting a damper on any outdoor plans or activities through Monday. 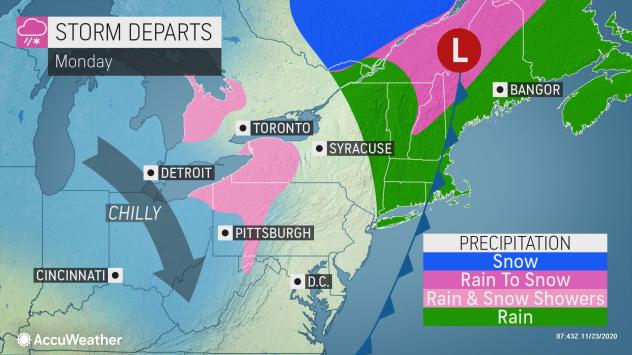 "High temperatures Sunday [occurred] very late in the day. In fact, many parts of the Northeast [were] milder Sunday night rather than Sunday afternoon," LoBiondo explained.

As colder air sweeps back in behind the storm, temperatures will tumble again for Monday.

In places like New York City, Philadelphia and Washington, D.C., temperatures struggled to reach the upper 40s to lower 50s Sunday afternoon, but then continued to rise Sunday evening. By dawn Monday morning, all three cities were in the upper 50s. Some portions of New York City even reached 60 degrees by 5 a.m. EST. However, temperatures will then fall back into the 40s through the day Monday.

The surge of milder air won't be so pronounced farther inland. In interior locations, temperatures will remain in the 30s and 40s through Monday. 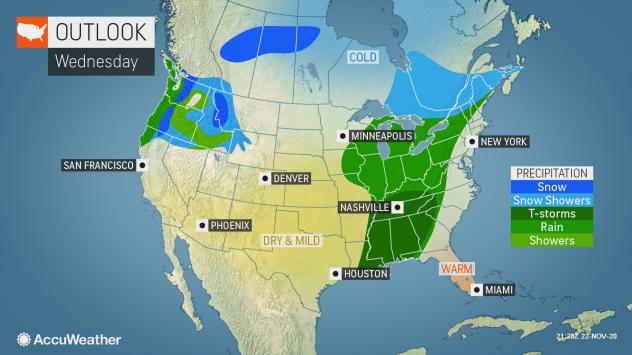 Milder air will move back in toward the middle of the week. However, yet another, larger, storm system pelting the center of the nation will move east, bringing more wet weather leading up to, and perhaps lasting into the holiday.