Russian police say a man was cleaning ice from his windshield in Vladivostok amid ice storms that left 150,000 people without water when a block came crashing down from the side of a building.

Mother Nature has already delivered a series of storm systems across the Northwest this month, bringing along much-needed rain and mountain snow to the region. With an increased amount of travelers on the road expected over the coming week, it may be wise to check the forecast and the tread on those all-season tires now, because wet weather will likely be featured in the coming days.

Both Seattle and Portland have observed more wet than dry days this month, with accumulating rainfall being observed on more than half of the days so far this November. This wet weather is proving beneficial for drought concerns across the region. Rainfall is expected to be featured in the forecast for the remainder of the days leading up to the holiday. 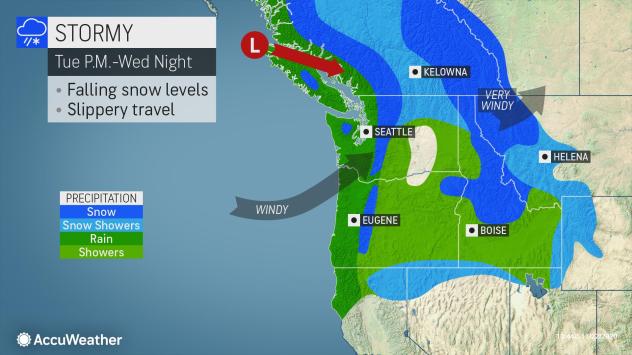 The wet trend persisted on Sunday for places like Seattle and Portland, when showery weather pushed into the Pacific Northwest during the afternoon. On Sunday, Seattle recorded its 18th day with measurable precipitation for the month, while Portland recorded its 16th.

Showery weather primarily targeted Washington and Oregon's Interstate-5 corridor and areas west near the coast on Sunday. However, steadier rain developed later Sunday evening and pushed farther east into the Cascades. For some in the highest elevations of the Cascades, rain turned to snow.

Snow is falling in the Cascades as the next weather system works its way into the Inland NW. This system will push into eastern Washington & north Idaho during the overnight and morning hours potentially resulting in a slippery Monday morning commute. #wawx #idwx pic.twitter.com/NwIvjPD9a2

Monday featured a rinse-and-repeat forecast across the Pacific Northwest as another slug of moisture targeted the region. Rainfall was not expected to pose any significant threat, as it was forecast to remain on the lighter side. Meanwhile, across the interior Northwest, scattered snow showers will began to spread from west to east, and could lead to a few tricky travel spots through the mountains into the nighttime hours.

It won't take long for the atmosphere to recharge and reload in the wake of the wet weather from Monday across the Northwest, as a more potent storm system is expected to set its sights on the Pacific Northwest on Tuesday. 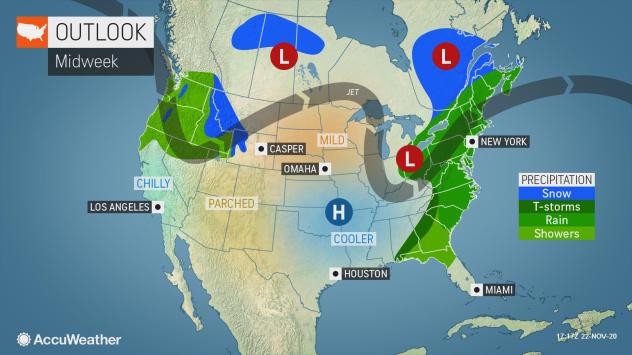 For those needing to make it out to the grocery store or head outdoors to enjoy any holiday week activities, largely dry conditions will encompass a majority of the Pacific and interior Northwest for the majority of the daytime hours Tuesday before wet weather returns.

A storm system will approach the coast during the day Tuesday and the evening commute could begin to feature a fair share of travel hazards as a steadier rain envelopes the region. Travel across mountain passes could also become tricky by Tuesday afternoon and especially by the overnight hours as cold air will drop snow levels down to many of the major passes.

This storm will progress eastward into the northern Rockies rather quickly Tuesday night into Wednesday, likely leaving a trail of accumulating snow across the mountainous terrain of northern Idaho, western Montana and even northwestern Wyoming. Meanwhile off the Pacific Coast, yet another storm system will be hot on the heels of the recently departed disturbance.

While the next storm to approach the Pacific Northwest on Wednesday may not feature quite as much of an atmospheric punch, it will continue to keep rain in the forecast in western Washington and Oregon.

This rinse-and-repeat pattern will continue to greatly benefit the snowpack across the Cascades over the coming week, so if anyone may be planning a Thanksgiving holiday ski trip, you're in luck as there should be plenty of early season powder to shred.

Just in time for the Thanksgiving holiday on Thursday, Mother Nature may provide residents of the Northwest a gift, as a break in the stormy pattern is expected. Although there may be some lingering snow showers across the Cascades and northern Rockies, travel conditions across the region should markedly improve on Thursday compared to earlier in the week. 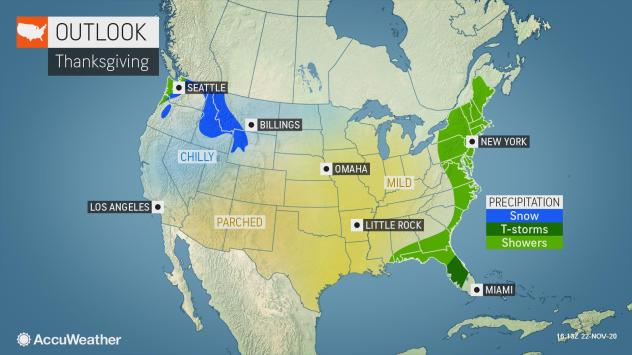 Black Friday shopping may end up looking quite different this year due to the ongoing COVID-19 pandemic with many stores promoting online and extended deals, however the weather may end up cooperating for the traditionalists looking to head out early and get their holiday shopping underway.