For centuries, the wolf has inspired long-standing myths and legends across the world. In recent years, viral videos online have spun new tales about the wolf, attributing immense ecological changes to the canine, including a cascade of effects powerful enough to alter the flow of rivers in Yellowstone National Park.

While wolves are crucial predators in the Yellowstone food web, the story of a wolf-driven "trophic cascade" promoted in a popular online video is far from the complex reality of the park's ecosystem.

According to the video, which has nearly 40 million views, the re-introduction of wolves to the park helped reduce the elk population, in turn allowing the heavily browsed willows to grow taller.

As the willows grew, they provided the beaver with a source of food, which resulted in more dams and changed the flow of the park's rivers. 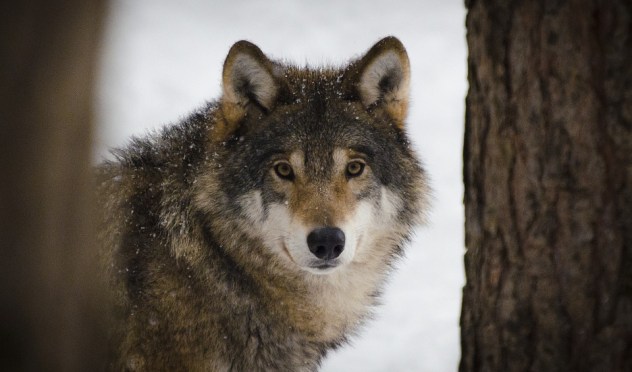 "It's a really romantic story," Utah State University ecologist Dan McNulty said. "It's a story about a world that doesn't really exist."

The gray wolf was once a prominent predator across the North American continent and was found in the Yellowstone area when the park was established in 1872. By the mid-1900s, wolves in the park, and across the country, were nearly eliminated from the contiguous United States by humans.

In the early 1970s, no evidence of the animal could be found in Yellowstone, save an occasional report of a lone wolf roaming the countryside, according to the National Park Service.

Colorado State University's Natural Resource Ecology Laboratory professor Tom Hobbs said there is no dispute among scientists that removing the wolf from Yellowstone had vast ecological impacts on the park, but there is a "disagreement on what happens when you put it back."

"It's a lovely story, and I would love this to be true, but it isn't," Hobbs said. "[The video] is demonstratively false."

Hobbs, who uses the video to open many of his seminars, has written several research papers regarding Yellowstone's willows. His research indicates that wolves have had very little impact on willow growth since their 1995 reintroduction.

"We've learned a lot over the past 20 years," Hobbs said, citing changes in precipitation, stream flow, floodplain and water tables as major contributing factors in the growth of willow.

Due to heavy browsing from elk and other ungulates (hooved mammals) like bison, the food source for the beaver was eventually depleted over time, causing the animal to leave the smaller streams, Hobbs said.

"Willows are like ice cream to these ungulates," Hobbs said. "It was important to put the wolves back, but it didn't change the willows much."

"Willows like to have their toes wet," he added, citing his research, which analyzed willow growth in four different groups for comparison that accounted for both browsing and water supply.

Due to the beavers' migration to larger water bodies, the small streams and tributaries of the larger rivers eventually became deeper and more narrow throughout the decades, which reduced the floodplain that riparian willow depend upon.

Hobbs said his research team was able to use historical maps of beaver dams for their research, in addition to finding 23 different sites across the northern range that matched their control group.

Willows deprived of a plentiful water supply, even when fenced in to protect from browsing, did not grow as quickly as browsed willows that had an adequate water supply, according to Hobbs.

"It hasn't even come close to recovery," Hobbs said, citing the geomorphology of the streams as a major factor in the 3 cm a year growth of the older willows.

Another reason the video is misleading, according to McNulty, is that it does not take into account the complexity of the Yellowstone food web, which has numerous other predators, including the most formidable: humans.

"Wolves are one of several larger carnivores," McNulty said, adding that bears, mountain lions and coyotes are all predators that eat elk calves. Wolves play only a small part in the reduction of the elk population.

"It is incredibly complex, and the 'trophic cascade' idea is cartoon of that," he said.

In addition to elk, other ungulates like bison are increasingly substantial members of the Yellowstone food web that browse the park's willows. Willows, however, are not the main food source of elk, which are primarily grazers.

"Ninety percent of what they eat is grass," McNulty said.

The most important impact on elk population may actually be attributed to humans, not wolves, according to McNulty.

As the Yellowstone elk migrate from the protected lands of the national park, they make their way into other areas in Montana, where they are open for legal harvest, McNulty said.

Thousands of elk were harvested by hunters, and as a result, humans contributed greatly to the reduction in population seen in 2004, along with a period of drought, he added.

"We know right out of the gate it was not entirely due to wolves," he said. "Wolves had very little effect, at least early on. To attribute it all to wolves is completely unrealistic."

"It is a classic example of how saying something many times with enthusiasm can make it true, regardless of what the science says," Hobbs said.

Building heat to set records in southwestern, south-central US