Sicily may have just hit Europe's hottest temp on record

Firefighters continue to battle blazes in Sicily, as temperatures reached what may possibly be a record high in Europe of 48.8C (119.8F) on Wednesday, August 11.

A scorching week in Europe may have just turned historic.

A heat wave that has been building much of this week throughout the Mediterranean allowed temperatures in Siracusa, located on the island of Sicily, Italy, to reach 119.8 degrees Fahrenheit (48.8 degrees Celsius) on Wednesday. The World Meteorological Organization announced on Thursday that it would be investigating the validity of this temperature report. If verified, it would become the highest temperature ever recorded in Europe.

A new round of brutal heat arrived across the eastern Mediterranean on Sunday and has been gradually shifting to the west throughout the week, bringing record-challenging heat not just to southern Europe but also to areas from the eastern Middle East to northern Africa.

Normal high temperatures across central and southern Italy during the middle of August are in the middle to upper 80s F (29-32 C).

In Italy, the area of high pressure that has been driving this heat wave has been nicknamed Lucifer, according to the BBC.

Red alerts for extreme heat have been issued by the Italian health ministry across several regions for Friday, the BBC reported. 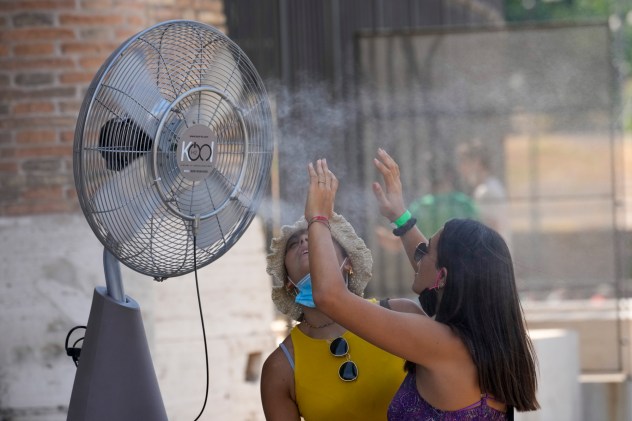 A woman refreshes at a fan nebulizing water next to the Colosseum, in Rome, Thursday, Aug. 12, 2021. In Italy, 15 cities received warnings from the health ministry about high temperatures and humidity with peaks predicted for Friday. The cities included Rome, Florence and Palermo, but also Bolzano, which is usually a refreshing hot-weather escape in the Alps. (AP Photo/Andrew Medichini)

Across the Mediterranean Sea, several new records were set in the African country of Tunisia.

Bizerte and Beja in northern Tunisia also reached 120 F (49 C) on Tuesday, setting new records for these cities as well.

The power grid became overwhelmed in parts of the country on Tuesday as residents stayed home and ran air conditioners to combat the heat, leading to power outages, Reuters reported.

Lucifer is forecast to continue shifting west through the end of the week, expanding the sweltering heat to the Iberian Peninsula in southwestern Europe.

According to AccuWeather Senior Meteorologist Tyler Roys, this will be the first major heat wave for Spain this summer.

Afternoon temperatures above 100 F (38 C) will be common across central and southern Spain each afternoon through Monday. Some temperatures in the central Guadalquivir Valley can even reach 110-115 F (43-46 C) on a couple of afternoons. 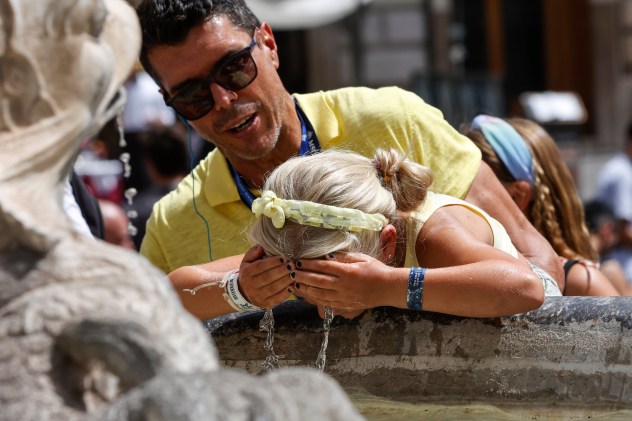 A child refreshes herself at a fountain in downtown Rome, Wednesday, Aug. 11, 2021. The ongoing heatwave will last up until the weekend with temperatures expected to reach over 40 degrees Celsius in many parts of Italy. (AP Photo/Riccardo De Luca)

Temperatures of this magnitude will threaten both August and all-time temperature records in many locations.

In addition to the heat, the high-pressure area has promoted extremely dry conditions across the Mediterranean, which have allowed wildfires to spark across the region and periods of gusty winds have allowed the flames to rapidly spread.

About 247,105 acres (100,000 hectares) have been burned by wildfires in Greece over the last two weeks, according to AFP, adding that data from the European Forest Fire Information System showed these were the most destructive fires there since 2007.

Wildfires have also been burning across southern Italy, and as of Thursday, three fire-related deaths have been reported, according to the BBC, which cited local media.

In Tunisia's neighbor of Algeria, at least 65 people have been killed as the country battles some of the most destructive blazes in the country's history, Reuters reported. Nearly half of the fatalities were soldiers who were deployed by the government to help get the fires under control.

The Algerian government hired two firefighting planes from the European Union to tackle the blazes on Thursday. These same planes were used to fight fires in Greece in recent days.

Over 100 wildfires were reported across Turkey during the end of July and into early August. One of the fires burned near the popular resort community of Bodrum, which led to the evacuation of over 1,000 people by boat as the flames neared the coast.

At least eight people were killed in the fires in Turkey, according to Reuters.

The scorching high temp in Siracusa, if it's verified as an all-time record for Europe, would be the latest in a string of all-time highs set this summer around the world. In late June, the mercury soared to 116 F (46.7 C) in Portland, Oregon, an all-time high for the city. To the north, in Lytton, Canada, the temperature went even higher and set an all-time high for Canada at 121 F (49.4 C). The heat has even extended beyond the Arctic Circle -- in June, the town of Oymyakon in Russia, known as the coldest inhabited place on Earth, set a record high June temperature with a reading of 88 degrees (31.1 C).