More severe weather to rattle, drench central US on a daily basis this week

Potentially damaging thunderstorms are poised to cause trouble in portions of the Plains and Midwest this week as high heat and humidity expand across the central and eastern United States.

"Overall, the greatest threats from the storms that erupt through at least Thursday will be from strong wind gusts and torrential downpours," according to AccuWeather Lead Storm Warning Meteorologist Eddie Walker.

The rain is likely to be intense enough to trigger a new round of street and small stream flooding.

As is the case with some severe thunderstorms, there is also the potential for hail to be produced and the risk of an isolated tornado to spin up.

On Tuesday and Tuesday night, violent thunderstorms caused dozens of incidents of wind damage from southern Nebraska and northern Kansas through southern Iowa and western Illinois.

On Wednesday and Wednesday night, stronger thunderstorms produced hail and wind damage across parts of Illinois, Missouri and the High Plains.

More severe weather is likely on Thursday over parts of the North-Central states.

The storms may take a more west-to-east track across the northern Plains to the Great Lakes region during Thursday afternoon and night. 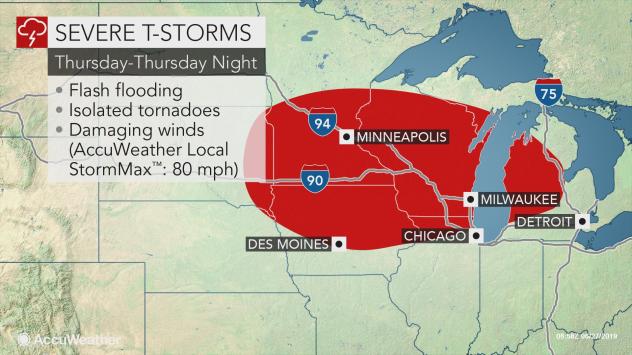 During this period, a complex of storms will travel from the eastern part of South Dakota to across Lake Michigan and much of the Lower Peninsula of Michigan. Storms are forecast to roll through Minneapolis in the morning and then Milwaukee later in the day or evening.

There is a chance the storms drift far enough to the south to impact Chicago and Detroit, and perhaps the Des Moines and Davenport, Iowa, metro areas.

AccuWeather predicts even lower corn and soybean yield for 2019 after latest report AccuWeather forecasts a significant increase in soybean planting this week Democratic debate 2019: It’s been hot in Miami lately — will it stay that way? What you should do if you get stuck driving in floodwaters 7 lightning safety tips if you’re caught outside during a thunderstorm 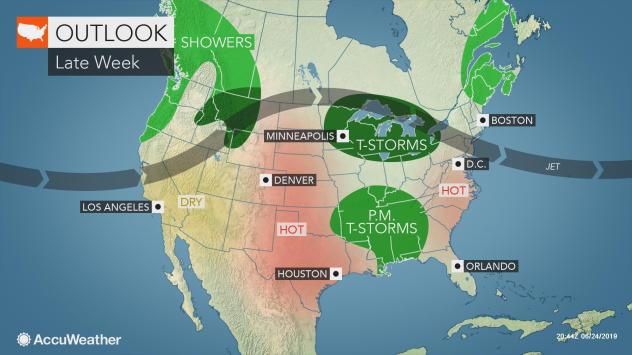 This time of the year, there is nearly a daily chance of thunderstorms to become severe at the local level in the South, with damaging winds as the primary threat. In addition, should a large complex of thunderstorms survive from northern areas, there is a chance of storms reaching a larger part of the South-Central states.

In terms of river flooding, heavy rain in the past week or so has caused a small, secondary rise on many of the rivers in the region this week over the Central states.

However, late this week, most rivers should resume their slow recession coming off the major spring flooding.

Download the free AccuWeather app to stay aware of the latest severe weather watches and warnings. Keep checking back for updates on AccuWeather.com and stay tuned to the AccuWeather Network on DirecTV, Frontier and Verizon Fios.