Massive platform of volcanic rock emerges from the sea

Molten rock oozing into the Atlantic Ocean along the shores of the Spanish island of La Palma transformed part of the coastline and sent clouds of towering white smoke into the air.

A photographer captured this stunning view of a large dust devil forming right next to the erupting Cumbre Vieja volcano in La Palma, Spain, on Nov. 15.

The Cumbre Vieja volcano on La Palma, one of Spain's Canary Islands, has been erupting since mid-September, and recently the volcano's violent eruptions have sent lava pouring into the Atlantic ocean, causing a large area of volcanic rock to rise from the sea.

A stream of molten lava that reached the Atlantic Ocean during the second week of November created a platform-like figure out of volcanic rock in the water. The rock reached a popular local surf spot, Los Guirres beach. 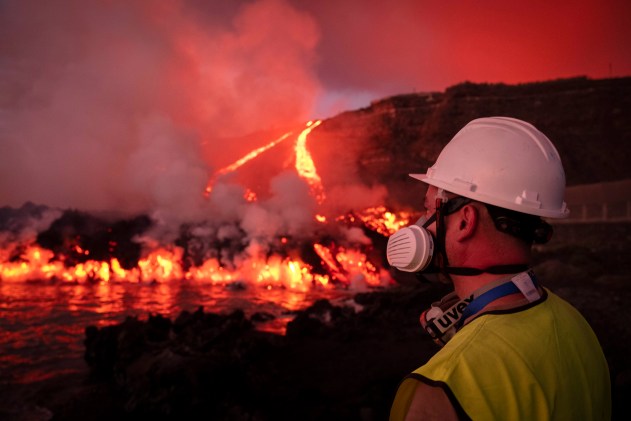 A scientist watches as lava flows from a volcano reaching the sea on the Canary island of La Palma, Spain, Thursday, Nov. 11, 2021. The Spanish Navy has begun helping farmers on the volcanic island of La Palma as they try to reach by sea their lava-surrounded banana plantations. (AP Photo/Taner Orribo)

When hot lava pours into the ocean, it first begins to boil and steam, as lava can reach temperatures as high as 2,012 degrees Fahrenheit, or 1,100 degrees Celsius. The lava can cause the ocean water to boil away, Newsweek reported.

The lava can also form a lava delta, which according to the United States Geological Survey (USGS), is new land created at the entry point in the ocean for the lava, extending outward from the coastline. These can be dangerous as they can suddenly collapse and trigger explosions as they do. The collapse of a lava delta can also create waves -- which are dangerous as the lava makes the water scalding hot.

A video of the lava that had reached into the ocean and created a pileup of debris in the water was shared by Spain’s Geology and Mining Institute. Water vapor and gas can be seen coming off of the newly-formed structure.

The first time the lava reached the sea over a month ago, authorities called on residents to stay indoors. However, this time officials said that is not necessary.

“New confinements are not necessary because the populations are far away from the point of contact with the sea that occurred last night,” a spokesperson for emergency services told Reuters last Wednesday, Nov. 10. 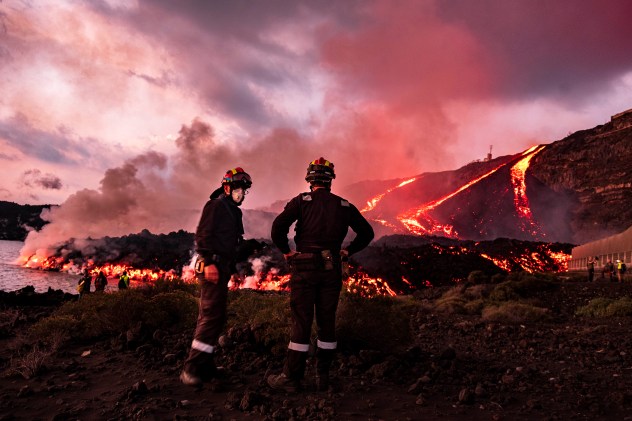 Members of UME (Military Emergency Unit) stand as lava flows from a volcano reaching the sea on the Canary island of La Palma, Spain, Thursday, Nov. 11, 2021. The Spanish Navy has begun helping farmers on the volcanic island of La Palma as they try to reach by sea their lava-surrounded banana plantations. (AP Photo/Taner Orribo)

The affected area is not heavily populated and consists mainly of banana plantations. However, on Nov. 14, the first death associated with the volcano was reported. A 72-year-old man in the municipality of El Paso was found dead after a roof he was working on collapsed.

The last major eruption on the island came around 50 years ago and resulted in toxic gases that killed one person.

This eruption has also released emissions of toxic sulfur dioxide, but the emissions have begun to dwindle since the initial eruption. On Nov. 9, La Palma’s council said the island's air quality was still good.