From flooding in Phoenix, Arizona, to a surfer riding the waves of Tropical Storm Karen in Puerto Rico, here are the top stories of the week.

It was a soaking wet start to the week in some areas of the Southwest, which were drenched with heavy rain that prompted several water rescues. Meanwhile, earthquakes wreaked havoc in Pakistan, India and Albania as one man captured on camera a frightening — yet mesmerizing — scene in the midst of a massive Midwest tornado. Let's glance back at the week that was.

Heavy downpours triggered flooding and prompted several water rescues in parts of the Southwest. At least five people had to be saved in Apache Junction, which lies just east of Phoenix, local officials reported. Flooding rain pounded the Arizona community so viciously that it received over a month’s worth of rain in under an hour’s time. 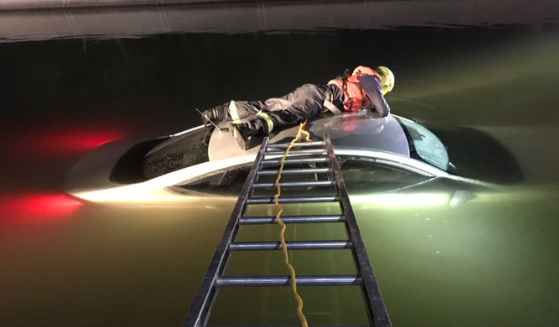 A first responder searched a vehicle that went into a canal near Glendale, Arizona. No one was inside the car and no injuries were reported. (Photo/Glendale Fire Department)

"There was a report of 3.5 inches of rain in an hour-and-40-minute period just north of Apache Junction," said AccuWeather Meteorologist Jake Sojda. That’s a far cry from the average of 0.64 of an inch of total September rainfall that Apache Junction usually sees.

Road closures, stranded vehicles and a tornado warning also added to the chaos of the severe weather earlier this week. Nearby Phoenix-Mesa Gateway Airport recorded 1.43 inches of rain on Monday, most of which fell within a two-hour window in which the floodwater rescues also occurred around the Apache Junction area, according to Sojda.

In the midst of the chaos, Shane Solo captured on camera the lightning flashes that lit up the tornado, which hit near the Chippewa-Dunn County line at 7:53 p.m. CDT as its 150-mph winds ripped across the region in what was otherwise darkness.

"Oh my God, I am shaking right now," Solo said as he filmed the tornado. "I don't know which way to go. It's going this way, but it looks like it's coming at us. This is insane." Elk Mound received the most damage, and the local high school opened as a shelter to anyone needing a place to stay.

Early the following morning, drone footage from Ryan Zweifelhofer revealed the full extent of the mess left behind in the twister’s aftermath.

Over in Asia, at least 25 people died and 450 were left hurt as a powerful 5.8 magnitude earthquake rattled northern Pakistan Tuesday afternoon, local time, Reuters reported. Tremors from the earthquake, centered between Islamabad and Lahore in Pakistan Occupied Kashmir, could be felt as far away as New Delhi. 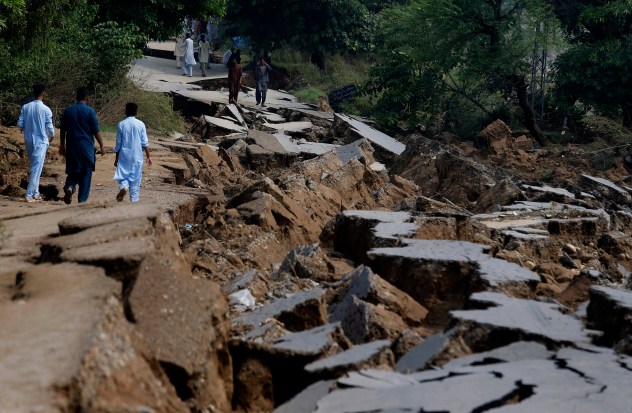 Residents walk alongside a damaged portion of a road caused by a powerful earthquake in Jatlan near Mirpur, in northeast Pakistan, Wednesday, Sept. 25, 2019. (AP Photo/Anjum Naveed)

The death toll is expected to rise as rescue efforts continue. Social media images and video showed the devastating impacts of the earthquake, which damaged buildings and left massive cracks in roadways that swallowed vehicles. There was at least one report of a building collapse.

Albania hit with 2 earthquakes, over 100 aftershocks

More than 2,000 miles away in Albania, a pair of earthquakes walloped the capital city of Tirana and the neighboring area of Durres last weekend. At least 68 people were injured, though that number could be as many as 105, according to some reports.

Cars were left crushed by falling bricks, and about 600 homes were damaged. The first 5.6 magnitude earthquake struck Durres Saturday afternoon, about 18 miles west of Tirana. It was the larger of the two — and Albania’s strongest earthquake in three decades. The second earthquake measured at a magnitude of 5.1.

More than 100 aftershocks followed the quakes.

Tropical Storm Karen doused Puerto Rico as well as the U.S. and British Virgin Islands Tuesday, but fortunately did not leave behind major damage. In Puerto Rico, Coamo, Orocovis and Bayaney were drenched the most with gauges in Coamo topping out at 5 inches.

A 6.0 magnitude quake struck off the northwest coast late Monday, but the Associated Press reported that no damage occurred. The next night, a 4-9 magnitude earthquake hit near the same area during Karen’s time hovering over the island.

Hurricane Lorenzo, the juggernaut that is churning in the Atlantic Ocean isn’t a threat to land … for now
1st blizzard of season to wallop northern US with up to 3 feet of snow
Tropical Storm Karen to change course over Atlantic next week
Southern US to feel like middle of summer as record heat persists this week

As Karen approached Puerto Rico, a surfer in Malecon De Naguabo took advantage of the choppy waves by riding them out while waving the island’s flag.

Later in the week, Hurricane Lorenzo continued quickly strengthening over the open Atlantic Ocean. It reached Category 4 status for a time, making it the third major hurricane of the 2019 Atlantic hurricane season. 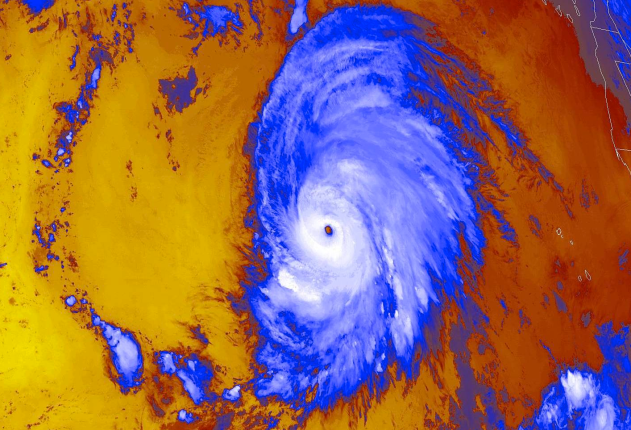 Weather experts state that Lorenzo could threaten the Azores, a group of islands in the east-central Atlantic Ocean, later next week, before potentially targeting the United Kingdom.

Record warmth grips the southern US

Parts of the country still felt like summer during the first week of autumn. In the southern U.S. numerous record highs were challenged or broken on Wednesday and Thursday.

On Thursday, the mercury rose to 95 degrees Fahrenheit in Atlanta, breaking the city's old Sept. 26 record of 90 set in 1986, according to The National Weather Service (NWS). 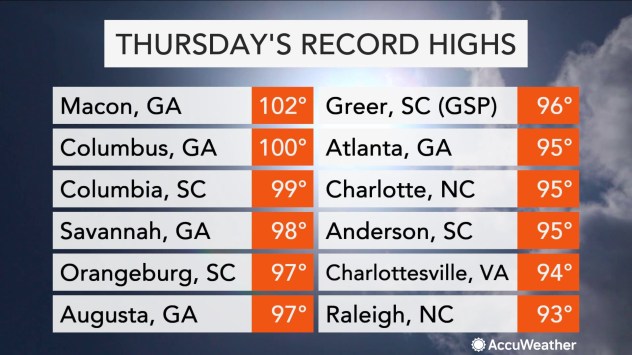 Anchorage, Alaska, saw a rare and short-lived hailstorm on Wednesday. It was brought on by a fast-moving cold front in the area around 10 a.m. that morning, the Anchorage Daily News reported.

By 1:40 p.m., the hailstorm had scattered pea-sized hail over much of Anchorage. The skies had cleared again by about 2 p.m. The cold front also brought along the first snow of the season to fall below 2,200 feet, which fell over the Glen Alps Trailhead.