105 people injured as a pair of strong earthquakes rattle Albania

On Sept. 21, a 5.6 magnitude earthquake hit Tirana, Albania, causing people to flee their homes and offices as the ground shook beneath them.

Cars were crushed by bricks falling from buildings in Albania's capital Tirana, as the country was struck by a pair of strong earthquakes on Saturday.

According to the Ministry of Health, at least 68 people were injured, but some reports say there are as many as 105 people injured. The majority of injuries occurred in Durres and Tirana. There have been no reported deaths.

The Saturday afternoon earthquake was followed by more than 100 aftershocks, authorities report. It also damaged about 600 homes and temporarily cut power and water facilities in Tirana and Durres.

Can ants, squirrels and other animals sense when an earthquake is coming?
Can a cruise ship feel the impacts of tsunamis, earthquakes?
In case you missed it: Last week of summer features a major hurricane, deadly tropical storm and a taste of winter

According to the United State Geological Survey (USGS), the first earthquake struck at 4:04 p.m., on Saturday near Durres, about 18 miles (29 km) to the west of Tirana. 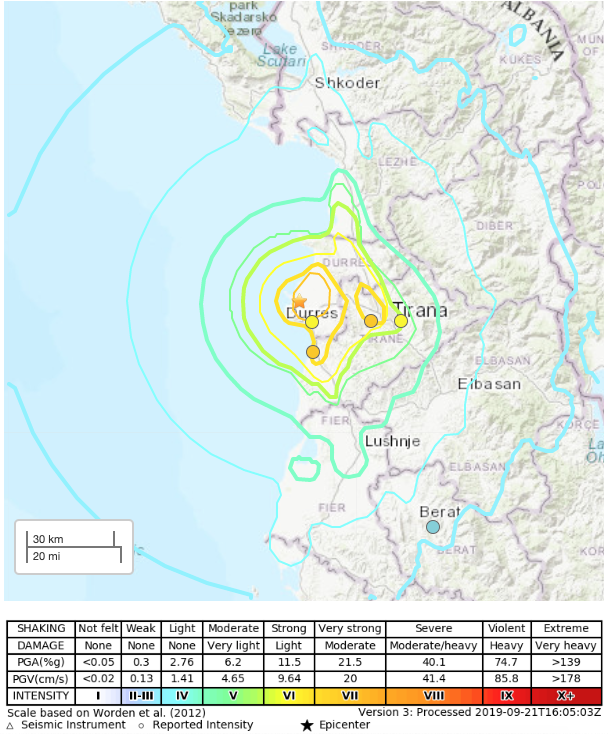 Shake Map of the larger 5.6 earthquake in Albania on Saturday, September 21, courtesy of the USGS.

The first and larger earthquake was reported as a magnitude 5.6 on the Richter Scale, which is Albania's strongest earthquake in 30 years. The second was measured to be slightly weaker at 5.1.

Buildings were damaged in the town of Durres which is close to the epicenter.

A university building in Tirana pic.twitter.com/J5UVYyrJOh

False
Report a Typo
Comments that don't add to the conversation may be automatically or manually removed by Facebook or AccuWeather. Profanity, personal attacks, and spam will not be tolerated.
Comments
Hide Comments