1st nor'easter of the season expected to strengthen rapidly, slam Northeast with rain and wind. 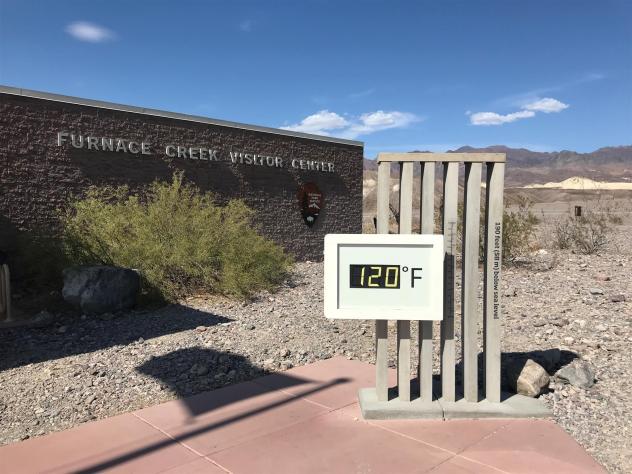 Death Valley, California, has not had a day cooler than 100 degrees so far during July 2020. (Brian Lada)

Several cities in the American Southwest and central Plains are enduring several-day streaks of temperatures breaking 100 degrees as the dog days of summer hit.

July, on average, is the hottest month, and the stifling heat over the past few days and forecast for the days to come won't make the month any more bearable for much of the country.

Temperatures in the city are expected to reach close to the record highs of 115 F on Friday, 118 F on Saturday and 115 F on Sunday. For comparison, the city's average daily high is 106, and its average daily low only 84.

Lubbock, Texas, has had some "cooler" days with the daily high reaching into the 90s after late June had carried the month in with a different steak in the triple digits. The average temperature for July is 93 degrees, but the city is expected to endure a row of highs breaking 100 degrees for the rest of the week through next week. 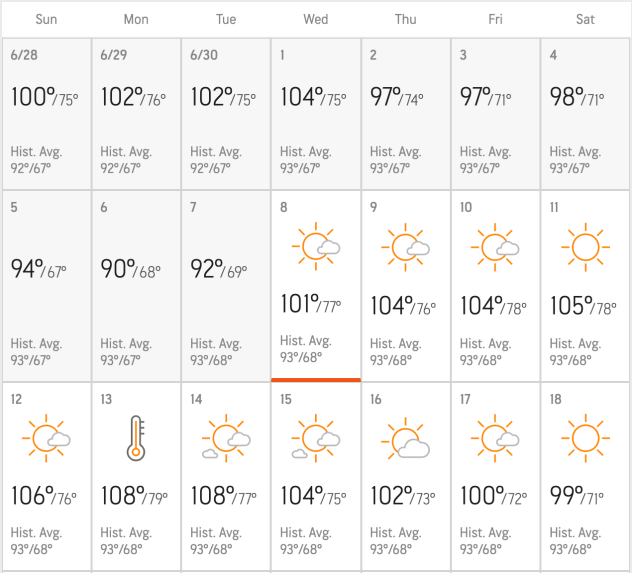 Lubbock, Texas, is expected to experience temperatures soaring into triple digits midweek during the second week of July 2020 and into the following week, according to the AccuWeather forecast.

Lubbock averages about 10 non-consecutive days above 100 each year, according to AccuWeather Senior Meteorologist Dave Bowers. The city is forecast hit that number in July alone, and the city has already recorded five days in June and July that have hit at least 100 degrees. The record number of days above 100 for the city is 48 days, set in 2011.

El Paso, Texas, on Tuesday, was on its fifth day of reaching 100 degrees and is expected to continue the trend through the weekend. The normal for the city in July is 96. Laredo, Texas, is expected to reach 100 degrees through the rest of July in what could be a month-long streak. This isn't uncommon for the city whose record is 48 consecutive days of 100-degree heat and experienced a streak last year that stretched beyond 30 days. 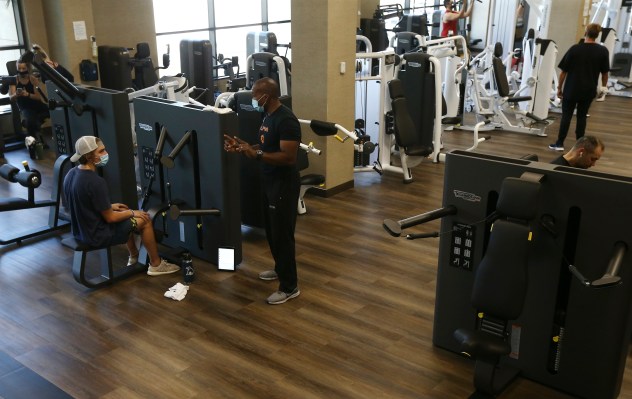 Mask wearing clients and trainers work out at a distance in the Life Time health club as the facility remains open even as Arizona Gov. Doug Ducey has issued an executive order for all gyms to close due to the surge in coronavirus cases in Arizona Thursday, July 2, 2020, in Phoenix. Several health clubs in metro Phoenix were defying Ducey's 30-day shutdown order to close gyms, bars, water park and tubing businesses, raising questions about whether officials who have been criticized for responding indecisively to the pandemic will be effective in shutting down the clubs. (AP Photo/Ross D. Franklin)

Death Valley hasn't seen a day under 100 in July yet, but only three days have surpassed the average high of 116 degrees. The hottest day was Monday, July 6, at 119 degrees. Death Valley's longest 100-degree streak was 154 consecutive days in 2001.

The current heat wave that has stretched from the American Southwest into the central Plains isn't unusual, according to Bowers.

Omaha, Nebraska, has had several days in the 90s and high 80s, but this heat wave "pales in comparison to the summers during the Dust Bowl years in the 1930s," Bowers said. Of Omaha's record daily high temperatures, 17 of the 31 days in July were set in the 1930s. July 25, 1936, reached 114 degrees -- just two degrees below Death Valley's average high temperature for the month of July. The average temperature for Omaha, Nebraska, in July is 87 degrees.

Daily coronavirus briefing: Kids may be fully vaccinated by Christmas