From meteor showers to the brightest star, here’s what to look for in the night sky in October

Fall is also the unofficial beginning of meteor shower season. This month kicks off with three meteor showers. Let's find out more about what's up in the sky for the month of October.

Stargazers will have plenty to see in October's crisp autumn nights, including a trio of meteor showers and the return of the sky’s brightest star.

Here’s what to look for in the night sky throughout the new month:

Autumn is sometimes referred to as meteor shower season as it boasts more showers than any other time of year. October alone features the peak of three separate showers.

The Draconids and Southern Taurids are both considered minor showers with just five to 10 meteors per hour. As long as clouds do not interfere, the best viewing will be after 3 a.m. local time after the moon sets.

The best of October's three meteor showers will bring shooting stars in much greater numbers than the Draconids and Southern Taurids combined.

The Orionids will reach its peak on the night of Monday, Oct. 21, into the early hours of Tuesday, Oct. 22. It regularly produces up to 20 or 25 meteors per hour, but between 2006 and 2009, it produced up to 75 meteors per hour, according to the American Meteor Society.

“The Orionids are actually made up of debris from Halley's comet,” AccuWeather Astronomy Blogger Dave Samuhel said. “Even though the comet visits the inner solar system only every 76 years, it left behind enough debris to produce this shower year in, year out.”

Typically, the Orionids are best viewed during the second half of the night. However, this year, the moon will be rising around midnight local time, adding extra light pollution to the night sky. People searching for shooting stars after moonrise should focus on a part of the sky away from the moon. 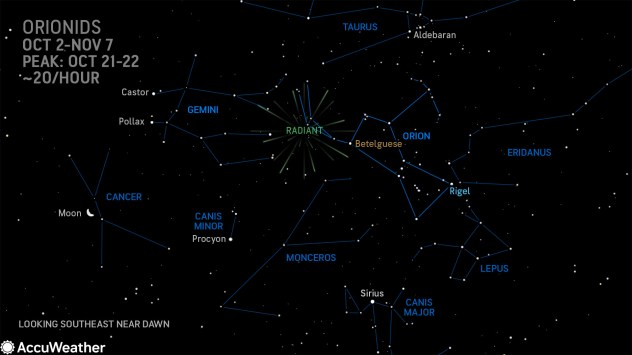 For all three showers, meteors will be visible streaking across all areas of the sky, not just near each shower’s radiant point.

2. Brightest star returns to the night sky
When: Late October

Night owls and early risers looking to the heavens will be able to spot the brightest of the stars as it makes its return to the night sky after being absent during the summer months.

Sirius outshines every star in the sky and began rising at the end of the night in September, but by late October, it will be rising in the southern sky just after midnight.

Not only is it easy to spot due to its brightness, but it is also located just below the constellation Orion. If you find Orion’s belt, it points directly toward Sirius.

“Sirius is well known as the Dog Star, because it’s the chief star in the constellation Canis Major, the Big Dog,” EarthSky explained on its website.

During part of the summer, Sirius rises and sets with the sun. This time of the year is referred to as the dog days of summer.

The end of the month will bring a great opportunity to spot four planets at the same time in the same area of the sky.

Each evening between Sunday, Oct. 20, and Friday, Oct. 25, will bring the opportunity to see Venus, Mercury, Jupiter and Saturn in the southwestern sky. 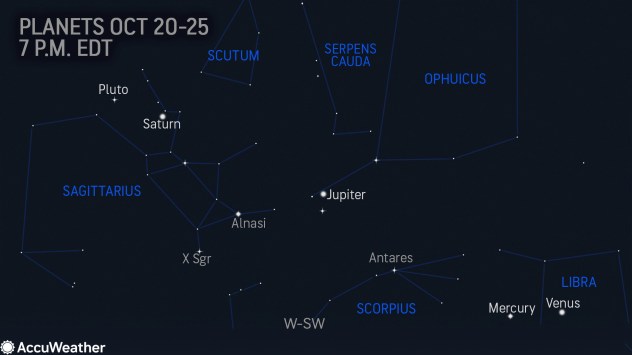 Of the four planets, Venus and Mercury will be the hardest to spot since they will be sitting so low in the sky barely above the horizon. To see them, onlookers will need a clear, unobstructed view of the western horizon. They will also only be visible for around an hour after sunset before dipping below the horizon.

Venus will be the brighter of the two and can be used as a reference point to find the dimmer Mercury just to the left.

Those out on Halloween trick-or-treating can also look up to see the crescent moon right next to Jupiter.

Looking back at September:

September marked the start of fall in the Northern Hemisphere with astronomical fall beginning at 3:50 a.m. EDT on Sept. 23, the latest start to autumn in years.

September also brought the Harvest Moon, one of the most well-known full moons of the year. This year’s Harvest Moon was not a typical full moon, falling on a Friday the 13th for the last time until 2049.

An otherworldly solar eclipse was photographed by NASA’s Juno spacecraft as one of Jupiter’s moons cast its shadow on the clouds below.

Even farther in the depths of our solar system, on Saturn’s largest moon Titan, new data shows that its methane-filled lakes were formed after nitrogen explosions.

Closer to home, India attempted to land a spacecraft on the surface of the Moon. Unfortunately, India lost contact with the lander near the end of its descent and the craft crash-landed on the Moon.

As Dorian neared landfall in the Bahamas as a historic Category 5 hurricane in early September, astronauts on the International Space Station captured images of the monstrous storm from space.

Later in the month, folks across the eastern United States were able to see the International Space Station as it made a pair of incredibly bright passes over the region.