Today marks the autumnal equinox, which means the beginning of fall for the Northern Hemisphere. During an equinox, days and nights are almost equal and days become shorter afterwards.

People hoping for summer to hang on just a little longer will get their wish as the official start to autumn falls later than normal this year.

The September equinox marks the official changing of the seasons around the globe. At 3:50 a.m., EDT, on Monday, Sept. 23, summer officially turned to fall in the Northern Hemisphere, while at the same time the Southern Hemisphere experienced the transition from winter to spring.

This small, but significant, difference causes the time and dates of equinoxes (and solstices) to shift over time. To account for the difference, every four years, an extra day is added to the end of February in what is known as a leap year.

On very rare occasions, the autumnal equinox can fall on Sept. 21 or Sept 24.

According to TimeandDate.com, there has not been an equinox on Sept. 21 for several millennia, but it will happen two times in the 21st century: 2092 and 2096. An equinox falling on Sept. 24 has happened more recently in 1931, but will not happen again until 2303.

AccuWeather's 2019 US fall forecast
Autumn and summer to battle it out over Northeast into October
Astronomy 101: Learn about the basics of stargazing and upcoming meteor showers

Regardless of the start of astronomical autumn, meteorological autumn always starts and ends on the same dates.

Traditionally, astronomical seasons last between 89 and 93 days due to the elliptical shape of the Earth’s orbit around the sun, according to the National Centers for Environmental Information (NCEI). The uneven lengths of the seasons makes it difficult to compare seasonal statistics from year to year.

Meanwhile, meteorological seasons are uniform and are all comprised of three months each. Every year, meteorological fall kicks off on Sept. 1 and lasts through Nov. 30.

“By following the civil calendar and having less variation in season length and season start, it becomes much easier to calculate seasonal statistics from the monthly statistics, both of which are very useful for agriculture, commerce and a variety of other purposes,” NCEI said. 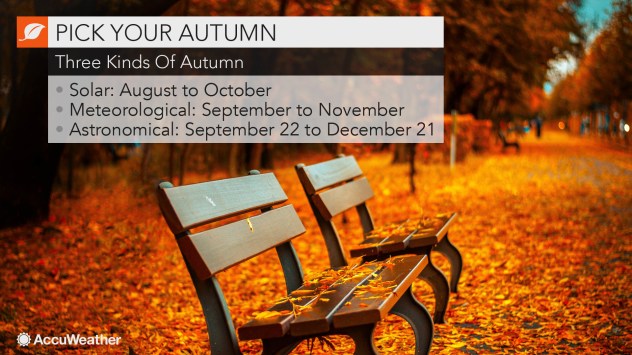