Weather believed to be a factor in major pileup

Nearly 70 vehicles have been involved in an accident on I-64 near Williamsburg, Virginia. Both sides of the interstate were closed for a lengthy period of time.

Amid foggy and icy conditions on Sunday morning, a devastating pileup involving over 60 vehicles in Virginia left dozens of people injured.

The accident occurred on Interstate 64 near Norfolk just before 8 a.m., local time, when patchy fog and black ice were reportedly in the Queens Creek Overpass area. Virginia State Police confirmed 51 people were taken to regional hospitals, including 11 people who sustained serious injuries. 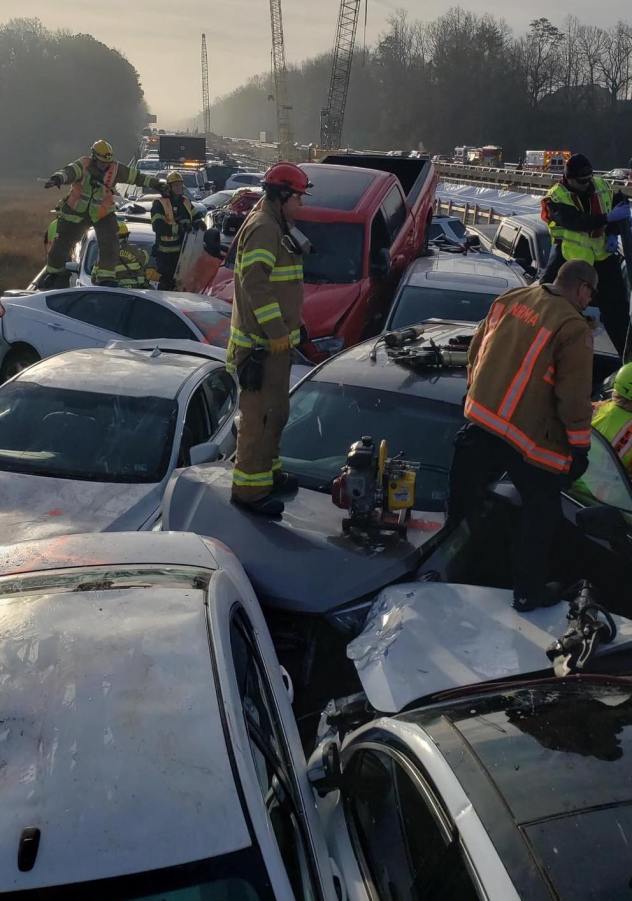 Emergency personnel on the scene of a large pileup on I-64. (Image via York-Poquoson Sheriff’s Office)

According to the police, 69 total vehicles were involved in the wreckage. Photos depicted firefighters and other emergency personnel standing on the hoods of mangled vehicles looking for people to rescue. Initial reports on Twitter stated that injuries ranged from minor to life-threatening, but the 5 p.m. update from the state police confirmed that no fatalities or life-threatening injuries were reported.

"My thoughts are with all involved in the multi-vehicle accident near Williamsburg this morning," Virginia Gov. Ralph Northam tweeted on Sunday. "Grateful for the emergency crews, first responders, hospital staff, @VSPPIO, and @VaDOT personnel who are working around the clock to keep people safe this holiday season."

Bray Hollowell, a survivor of the pileup, told WTVR.com that the accidents were an "apocalyptic moment." When the weather turned quickly, the foggy conditions dashed any hopes of visibility.

“It really just got really foggy really quick,” he said. “I just was driving on the bridge and then out of nowhere I see an accident and I just brake. And I couldn't really do much to avoid, I just ran into people.”

Holloway said he considers himself lucky and fortunate to walk away uninjured.

I-64 accident this morning pic.twitter.com/xD1DjLMY1k

"In situations such as this, the road may appear wet, rather than icy, hence the term black ice," AccuWeather Senior Meteorologist Alex Sosnowski said.

According to Sosnowski, temperatures ranged from the upper 20s to the lower 30s in southeastern Virginia before and shortly after daybreak with areas of fog. 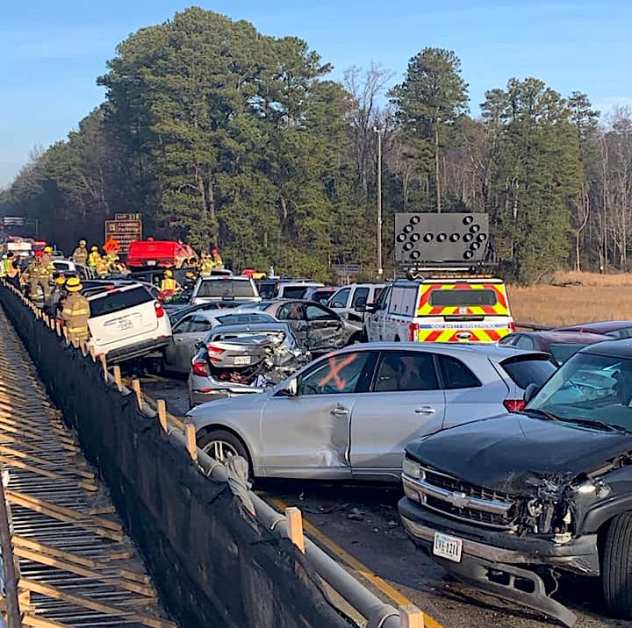 Firefighters on the scene of a pileup on I-64 near Williamsburg. (Image via Virginia State Police)

"The sudden low visibility in parts of the region created a dangerous visibility situation on top of the black ice condition," Sosnowski said.

"This just demonstrates that even during a mild and storm-free weather pattern, that a few fog patches this time of the year can be dangerous with freezing temperatures," Sosnowski said.

Rain, snow to make for tricky travel leading up to Christmas in the Southwest
A white Christmas may be nothing more than a dream for many this week
Fall-like temperatures to eat away at the snowpack across central US in the final days before Christmas