Rain, snow to make for tricky travel leading up to Christmas in the Southwest

While the remainder of the country stays mostly dry the days leading up to Christmas, the southwestern U.S. will be enduring stormy weather.

After pummeling the Northwest with flooding rain and feet of snow, a storm will dive southward to bring wet weather to the remainder of the West.

This satellite animation shows the latest storm moving into the Southwest on Dec. 23, 2019. (Image/CIRA RAAMB)

By Monday morning, the storm had gathered in Southern California, bringing with it the heavier dose of rain and lower temperatures.

"Those looking to do some last-minute holiday shopping Monday across much of Southern California, including San Diego and Los Angeles, will need umbrellas and raincoats as they head from store to store as it will be rainy and chilly much of the day," said AccuWeather Senior Meteorologist Dan Pydynowski. 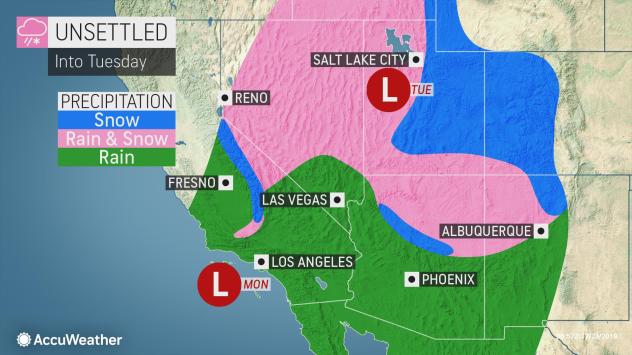 High temperatures of around 60 degrees Fahrenheit will be likely on the Southern California coast, as much as 5-10 degrees below normal for late-December.

Into Christmas Eve on Tuesday, precipitation will spread inland, bringing a mix of rain and snow to parts of Nevada and Utah.

Which places can expect another snowy winter? AccuWeather’s winter forecast has the answer to this — and much more A white Christmas may be nothing more than a dream for many next week How to Drive in Snow and Ice US post-Christmas travel outlook

Snow is expected in the highest terrain of Colorado, as well as northern Arizona and New Mexico, while the rest of the Southwest will experience rain.

"Intermittent rain will make for slow travel on I-10 between Phoenix and Tucson much of the day. The higher elevations of I-17 and I-40 could see accumulating snow making for tricky travel on Tuesday, including around Flagstaff," added Pydynowski.

Snow is expected to linger into Christmas morning for some locations, increasing the chance for a White Christmas in the Southwest. 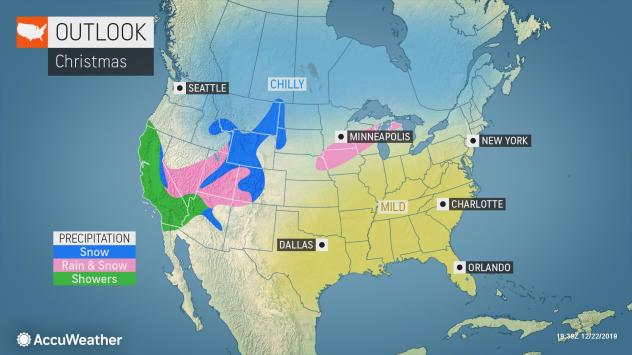 Travelers should use caution even on Christmas Day, as precipitation is likely across much of the region. Showers stretching across much of California could slow motorists, while snow farther inland can leave snow-covered roadways.

After Christmas, another storm may follow this one, bringing another round of rain and mountain snow Thursday into Friday. However, drier weather is likely to return before the start of the new year.