Bomb cyclone knocks out power for hundreds of thousands

The powerful storm that hammered the Northeast Wednesday into Thursday strengthened fast enough to be classified as a bomb cyclone. The flooding rain and hurricane-force wind gusts caused problems for millions.

A potent storm that swept across the East Coast on Wednesday left over half a million customers without power on Thursday morning, as winds from the back side of the storm system continued to whip across the region.

As the storm underwent rapid strengthening, it unleashed drenching rain, hurricane-force winds and even some high-elevation snow to the northeastern United States.

The storm packed a heavy punch with travel disruptions, tree damage, coastal flooding in addition to the power outages.

The storm strengthened at a fast enough pace into Thursday to be classified as a bomb cyclone. For a storm to meet bomb cyclone criteria, the barometric pressure has to fall at least 24 millibars, or 0.71 of an inch of Mercury, in 24 hours.

Preliminary October records were also set in Boston and Concord, New Hampshire. Boston reached 975.3 mb, surpassing the previous record of 982.4, while in Concord, the pressure dipped to 973.1, breaking the old record of 980.4. The National Weather Service will ultimately determine the validity of these records.

"NOAA lists records which are over 980 mb for stations in Connecticut, Rhode Island, Massachusetts New Hampshire, and southern Maine." Ferrell said on Wednesday. 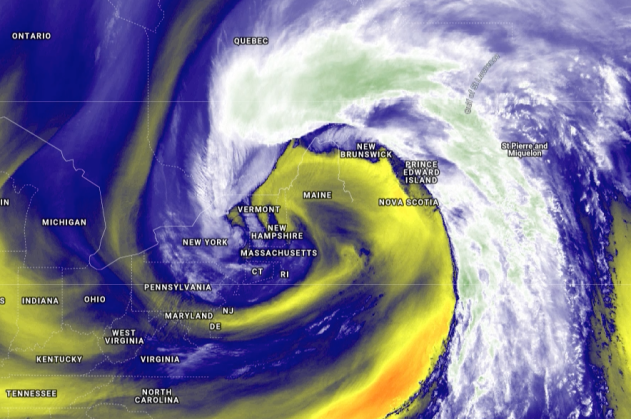 A satellite view of the strengthening storm bringing heavy rain and high winds to the Northeast on Thursday, Oct. 17, 2019. (NOAA/GOES-EAST)

Since winds on the front side of the storm were from the east or southeast, instead of the northeast for New England, the system is not being considered as a true nor'easter.

Power outages peaked with over 500,000 customers finding themselves in the dark across the Northeast on Thursday morning, according to PowerOutage.us. By Thursday night, the outages had dropped to just over 268,000 with most of the outages in Maine and Massachusetts. 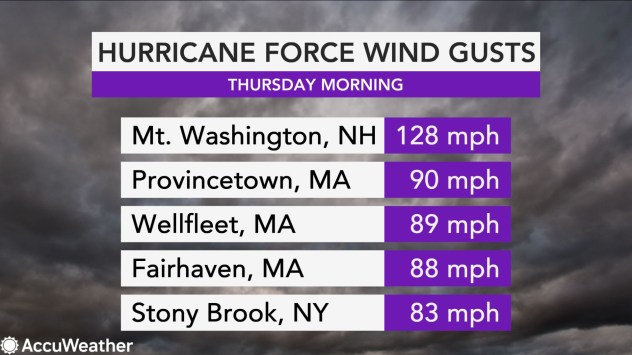 Three people died and eight were injured following an accident involving a multi-passenger van on Wednesday afternoon in Chester County, Pennsylvania, according to Pennsylvania State Police.

The cause of the accident remains under investigation, however, AccuWeather meteorologists say rainy weather could be to blame.

“At the time of the crash, heavy rain was falling across the area, and could have been a factor,” AccuWeather Meteorologist Jake Sojda said.

Heavy rain can significantly reduce visibility as well as cause hydroplaning, especially at high speeds in heavy rain.

“The heavy rain causes a layer of water to form on the roads, which can cause the tires of a vehicle to become 'disconnected' from the pavement surface and thus the vehicle loses traction, much like an icy surface,” Sojda said.

Travel delays struck airports in the northeast due to weather and wind, triggering a Traffic Management Program for traffic arriving to the John F. Kennedy International Airport (JFK) in New York on Wednesday night.

By Thursday afternoon, there had been over 1,700 flight delays across the major airports across the region. 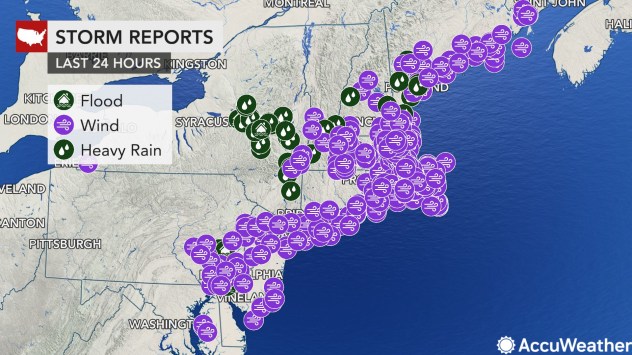 From the standpoint of abnormally dry to moderate drought conditions, the storm's rainfall was welcomed.

However, enough rain fell at the local level in some urban areas to cause minor street and poor-drainage area flooding.

Why trees topple in high winds Which places can expect another snowy winter? AccuWeather’s winter forecast has the answer to this — and much more 1 US city’s temperature swings could make it the capital of a crazy fall

On Wednesday night, a flash flood warning was issued for portions of northern Connecticut as downpours continued to stream into the region.

The first snowflakes of the season were reported in Snowshoe, West Virginia, on Wednesday night as cold air charged in behind the storm.

🚨❄🥳 The first flakes of the season are officially flying here on the mountain!

Chilly air will maintain its grip across the Northeast at the end of the week, but winds will not be nearly as intense as they were on Thursday.